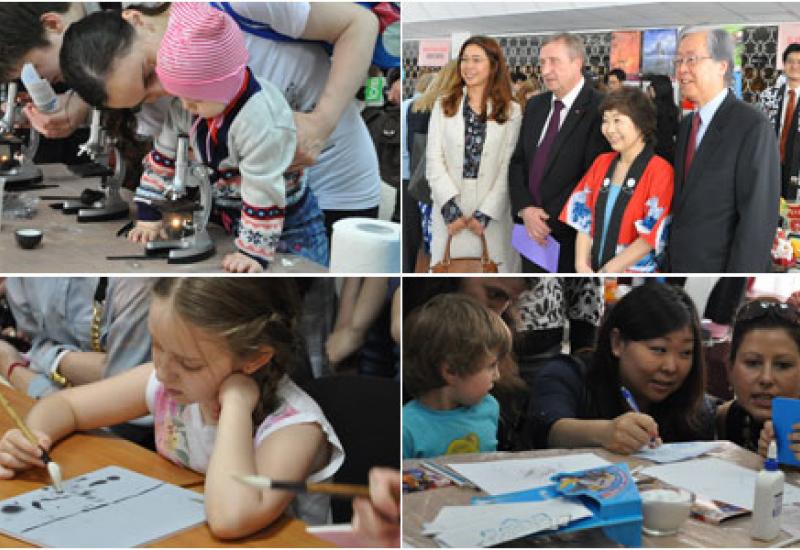 May 21 a charity event "Japan Day" organized by the University in conjunction with the Embassy of Japan in Ukraine, UN Children's Fund (UNICEF) in Ukraine and Ukrainian-Japanese Center of NTUU "KPI" took place at NTUU "KPI".

The main purpose of "a Day of Japan" was the popularization of Japanese culture and the propagation of knowledge about healthy lifestyle among young people and children, families with children, children with special needs, Kyiv students and anyone interested in the culture of the Country of the Rising Sun.
Activities in frame of the "Japan Day" began before the official opening ceremony by the lecture "UNICEF in Ukraine: how together to make life better," which for the Kyiv Polytechnic was read by UNICEF Representative in Ukraine Yukie Mokuo.

But the main program of "a Day of Japan" was held at the University Center for Culture and Arts.

"In different parts of the world, children are equally in need of protection, care and attention. Society must take care of their safety, health, and create opportunities for their development and provide opportunities for quality education" - Rector of NTUU "KPI" Academician of NAS of Ukraine Michael Zgurovsky said during opening ceremony.- It is good that today for the popularization of these ideas, for the sake of children in Ukraine we have collected in our university so many respected and interesting people. "

Ambassador Extraordinary and Plenipotentiary of Japan to Ukraine Toichi Sakata also spoke at the ceremony. "The Government of Japan is one of the major donors of UNICEF, an organization that helps children around the world. In 2012, the amount of financial assistance from the Government of Japan was about $ 200 million, which is fifth in the world. - He said.- Japan for many years ranked first in the world by volume of financial assistance to UNICEF from public and private sector. This indicates a very warm attitude of the Japanese to the organization ".

Yukie Mokuo told participants of the celebration of how important for UNICEF partnership with the Embassy of Japan in Ukraine and NTUU "KPI". But main accent in her speech she made on the necessity for Ukraine overcome the problem of iodine deficiency. "I hope this event will help young people and children to know more about iodine deficiency problem and ways to overcome it. " Lack of iodine in the body is one of the major health problems of Ukrainian people. Because of it Ukraine loses annually intellectual potential which would be enough for 3000 geniuses, - Yukie Mokuo said and reminded the audience a rather simple way to overcome this problem: - Daily consumption of iodized salt is the key to intellectual development of man."

However solemn part did not last long, because it was a holiday, the main participants of which were children, including children with disabilities, and students - and that is the audience that is not very fond of all sorts of formality. Therefore, immediately after the end of official part everybody saw the show program of Japanese drummers "Taiko" and choreographic group, performing traditional dances bon-odori, got the opportunity to participate in master classes by furoshiki (an ancient Japanese art of wrapping objects in fabric turned into art gift wrapping ), origami and calligraphy. And yet, of the interesting experiences that specialists of IQ laboratory UNICEF did with the children - to learn about the properties of iodized salt and the importance of its application. Collections of folk tales and Japanese classical poetry and books devoted to country history and cultural traditions were sold in the Center of Culture and Art lobby . The Japanese Embassy organized a charity auction, all proceeds from which will be donated to UNICEF and the International Women's Club of Kyiv (IWCK). Works of Japanese folk art, toys, children's clothing and other products provided by Japanese companies and the Japanese community were sold there.

And, of course, delighted participants and guests of the "a Day of Japan" received last event under its program - a demonstration of full-length animated film of the famous Japanese director Hayao Miyazaki's "The wind rises", the current nominee for "Oscar."