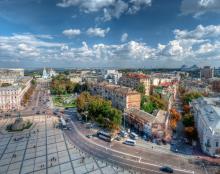 Kyiv. This short sonorous word is a name of the city, whose roots go deeply in the ancient time. Its history totals more than 1500 years. This is one of the oldest Slavic cities, the capital of the early feudal state Kyiv Rus', the city known in the history as "mother of the cities of Russians". One of the centers where the early Slavic culture arose as an important component of a world civilization.

Kyiv is sung in songs, in immortal chronicles "Stories of Temporary Years" (the second half of the XII century), In the epos "Tale of Igor's Campaign", in novels, operas. The city made a huge contribution to a world history, science, culture and art.

There are many historical monuments, ancient cultural places, museums, theatres, gardens and parks remained in Kyiv. One of extraordinary places is the Cathedral of Sacred Sofia, constructed in distant 1037. At all times this masterpiece of architecture drew attention of people of the whole world.

In the middle of the XI century there were founded Kyiv Pechersk Lavra with the Uspensky cathedral (put in 1073, destroyed in military hard times 1941, restored in 2001) and Troitsk gateway church. It became the greatest shrine of the Ukrainian people; in the orthodox world it is appreciated equally as Jerusalem and Sacred Mount Athos in Greece. Here everything is fanned by legends: churches, bell towers, caves where relics of more than hundred monks recognized as the sacred are based.

The monastery became the large spiritual centre of Kyiv Rus', where books were written, painting, church singing, medicine were developed.

Not less known sight is the Andreevska church constructed in 1749-1754 by outstanding architect Bartolomeo Rastrelli in Baroque style, characteristic for architecture of the XVII-XVIII centuries. Borrowed of the West European architecture, this style got unique national signs under the influence of local traditions.

Cathedral of Sacred Sofia, Andreevsky church and Kyiv Pechersk Lavra are included in the list of outstanding historical monuments of UNESCO.

Among other monuments of architecture are the well-known Golden Gate (constructed in 1037), the Mariinsky palace (XVIII century), National opera and ballet theater of Taras Shevchenko (1901) and many, many others.

Recently inhabitants of Kyiv see considerable activization of economic activity in the city. In Kyiv broad construction is carried out, streets and municipal networks are ordered. Systematically the capital subway is developed. New schools, medical and trade institutions open their doors. Foreign investments are attracted; the city cooperates with partners from 157 countries.

Bright manifestation of care of Kyiv inhabitants’ spirituality and beauty of the historical city became the actions directed on restoration of ancient shrines. The church of Virgin Pirogoshchi on the Hem was reproduced from a non-existence, Mikhaylovsky Zlatoverkhy cathedral and the belltower, the Uspensky cathedral of Kyiv Pechersk Lavra were restored as well. Ethnic minorities have ample opportunities for religious and cultural activity: the Aleksandrovsky church and the Choral (Central) synagogue, the mosque are under construction.

The population of Kyiv makes more than 2,6 million people, the city territory - 827 sq.km (more than a half of them - green massifs and reservoirs). In the city there are about 80 thousand buildings, 76 hotels (from them 16 are three-stars, 3 are four-stars, 2 are five-stars), 162 post offices, more than 400 educational institutions, about 100 hospitals and more than 250 out-patient clinics, 35 concert halls, 32 museums, 24 stadiums.

Kyiv as the capital of Ukraine is the location of official representations of the foreign states. For the time being, the 132 ambassadors of foreign countries and representation of 16 international organizations are accredited.