The history of KPI 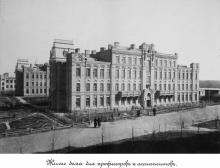 The idea of establishment of technical educational institution occurred to sugar mill workers of south-west regions. On 18th of January 1880 with the active support of the head of Kyiv exchange committee N. Hryakov it was decided to open the subscription for donation-raising. Raising money, guaranteed the contributions of Kyiv patrons and support from the Minister of Justice S.Witte who allowed to make a decision on 25th of November 1896 on private meeting in L.I. Brodskyi’s house to establish Kyiv Polytechnic Institute.

Under the voting of S.M. Solskogo (Kyiv mayor) and with the participation of local authorities representatives, South-west railroad administration, engineers and manufacturer The Protocol that “comprises actually first practical document in the history of higher technical education institution in the Kyiv city” was ratified. “The most accepted type of the new educational institution should de denoted as Polytechnic institute type, which consists of several departments of various specialties, as in polytechnic school of Zurich, Karlsruhe, Munich, Vienna, Hannover, Aachen, Dresden, Riga etc” was noted in this document.

Famous architects took part in the contest of Polytechnic institute building projects: Benua, Gogen, Kitner, Kobelev, Pomerancev, Cender and Shreter. The best one was prof. I.S. Kitner’s project, for which buildings of Kyiv polytechnic institute were built. As he lived in St. Petersburg and couldn’t run working process directly, the work was headed by architect O.V. Kobelev. After precise acquaintance the area of 38 dissipations along Brest- Lithuanian highway was chosen.

On 31st of August 1898 Kyiv polytechnic institute was opened, where the head of trade and manufacture Department announced Great behest apropos of this.

4 departments were denoted: mechanical (109 students), engineering (101 students), agricultural (87 students), chemical (63). First enrolments were announced in June 1898. According to the Regulations, all comers, who had certificates from grammar school, real colleges or other secondary schools that are equal to grammar schools, were allowed to take the examinations. Entrants from other universities were enrolled out of competition. 1100 applications for 330 places were submitted. The examinations in mathematics, physics and Russian language were successfully passed by more entrants than it was predicted. By intercession of university board, Ministry of finance allowed to enlist 30 more entrants.

Studies began at 1st of September at the apartment, which was built for commercial college (Vorovskogo street), which was rented by university for one year. After finishing the building (April 1902) institute had a full complex of buildings: main building - engineering, mechanical and agrieconomic departments, chancery, fundamental science-technical library; chemical building - chemical department; mechanical workshops with central power station for lighting of all buildings and heating of the main building; field research buildings, yard for livestock, agricultural farm and garden; living quarters for professors and laboratoriants - 2 buildings; canteen.

V.L. Kirpovich was appointed for the first head of KPI, being a specialist in the sphere of organization and establishment of higher education institutions. Leading figures of science D.I. Mendeleev, M.E. Jukovskyi, K.A. Temirayzev and others gave science methodical support in organizing and establishment of the university. Pedagogical group of KPI was first to introduce the competition to order of appointment for professors of departments exceptionally from persons, who has a degree. It was the most appropriate method of staffing the departments by highly-qualified specialists. For working in the institute many famous scientists from Kyiv, Moscow, Petersburg, Kazan, Kharkov were invited. There were prominent specialists in theoretical mechanics O.P. Kothelnikov and O.M. Dinnik, mathematics V.P. Ermakov and B.Y. Bukreev, one of the founders of theory of metal cutting K.O. Zvoriking, geologist-mineralogist O.V. Nechaev, famous scientist, metallurgist V.P. Ijevskyi, heating engineer O.O. Radzig, prominent specialist in bridge building E.O. Paton, gifted chemists M.I. Konovalov and L.V.Pasarjevskyi, architecture academician O.V. Kobelev, artst M.K. Pimonenko. Later world famous scientists mechanics S.P. Timoshenko, K.K. Siminskyi, S.V. Serensen and others were invited for teaching at the institute.
First head of KPI State examination board in 1903 was D.I. Mendeleev. Only 93 graduates received the certificates - it was very hard to study, especially payment, revolution were expanding. First graduates of KPI were presented with breast Toksnof graduate along with certificates.

Already from 1899 the movement for creation of fifth, aeronautic department of KPI began and it was leaded by one of the biggest enthusiasts of aviati8n professor Mykola Artsmiyev, talanted apprentice of Mykola Jukovskyi. From his initiative aeronautic section within KPI mechanical club was organized in 1905-1906. Professor Stepan Timoshenko became the first honorable chief of section and student of mechanic department Victorin Bobrov became its vice-chief. In September 1908 section was reorganized into aeronautic club with airplanes, helicopters, and engines departments. KPI professor Mykola Delone (son of the pioneer of aviation Boris Delone) was passionate propagandist of aviation and gliding idea, who became one of the founders of Kyiv aeronautic community (KAC). Exactly KAC was the first aviation nucleus, in work of which participated professors, engineers, constructors and KPI students who were speaking with lectures on aviation, building and testing flying vehicles, gliders.

Inalienable page of KPI history is its participation in antidemocratic movement of the country, which was performed under slogan of democratization of high schools, freedom of students communities. Already in spring 1899, i.e. at first year of existence of university, its alumni took part in All-Russian student strict, directed against reaction Policy of government. Governments answer was expulsion, detention and exile of 32 students - organizers and active participants of the strike. But it was not the last student riot and students were participating in all tempestuous events of the beginning of 20th century.

In the summer of 1918 the fifth faculty was created – the electro technical. Classes at the institute stopped and continued in correlation to the progress of the war in Kiev. Social transformations of the country were equally represented in the fundamental changes of the university governance principles.

After the revolution and civil war it was imperative to rebuilt the economy of Ukraine, and a number of industries had to be created or restored, among them: machine-building engineering, machine tool engineering, automotive industry, chemical industry, defense sector, tractor engineering, metallurgy and others, it was necessary renew the old and build new businesses and technically re-equip them. To meet these requirements of the national plan the engineering intellectuals had to be trained in a short period of time. This important task was entrusted on different universities of the country including the Kyiv Polytechnic Institute, which was renamed to Industrial in 1934.

In June in 1941 KPI concluded 43 th academic year. The Institute had 3,000 students, more than 300 faculty members and the total number of the institute staff was about 5,000 people. Like in other universities, graduates defended their diploma works and received a job, students of the senior courses had manufacturing practices in various cities of the country, students of the junior courses had bridging exams. The War united everybody with a common goal - protecting the homeland.

From the first days of the war, many lecturers and staff, graduates and students of the institute voluntarily and through mobilization joined the Red Army. They took part in the fighting on all fronts of the World War II. Graduates of the institute, who remained on the occupied territories participated in the underground and guerilla struggle.

Late in June 1941 the Institute received orders to prepare for evacuation to Tashkent, where it functioned as a part of the Central Asian Industrial Institute.

The liberation of Kyiv in November 1943 made it possible to reopen the institute: began the registration of the faculty members, staff and students that returned to the Institute. In the second half of January 1944 the Selection Committee started its work of accepting first year students and renewal of the senior course students. All efforts of the institute was aimed at restoring educational material basis, because as a result of Nazi occupation and fierce battles for Kyiv more than a half of the total area of classrooms were destroyed, dormitories were burnt down and other property was looted. Because the Institute was included in the list of the most important industrial and transport universities of the country, students of all courses were exempted from draft into the Soviet Army and also were provided increased stipend (that concerned primarily students who studied foundry, forging, pressing and chemical production). Since the reconstruction works terms were constantly violated, in the summer of 1945 the students and teachers volunteered to do all urgent works during their month of holiday vacation.

To improve the quality of training, the scientific research work and involvement of students, especially of the senior year, had great importance. The basic form of their involvement in research during the postwar years were scientific groups, and on its basis in April 1946 the student science and technology community was created. At the time of creation it had nine sections, which have united 30 groups of different specialties and about 500 students. The groups were directed by leading scientists of the institute.

During the history of our university it was led by 23 rectors.

During a long period of existence of our institute its name was changed several times:

Due to the reorganization of units of the Ukrainian Soviet Socialistic Republic Ministry of Education on the base of the Kyiv evening faculty of Ukrainian Polygraphist Institute of Fedorov in 1989 the graphic arts faculty had entered the structure of KPI, which on September 6, 2004 was renamed to Publishing and Graphic Arts Institute. It was founded on January 1, 1954, in Kiev, on the basis of Art and Crafts School of Graphic Arts № 18 as training and advisory department of Moscow Printing Institute.

According to the order of Minister of Education and Science, Lilia Hrynevych, dated August, 17, 2016 №992 to grant National technical university of Ukraine "Kyiv politechnical institute" with the name, university was named in tribute to the former student , outstanding aircraft designer of XX century I. I. Sikorsky. Thus, it's full name from now on is National Technical University of Ukraine "Igor Sikorsky Kyiv Polytechnic Institute".

About University
History of the university