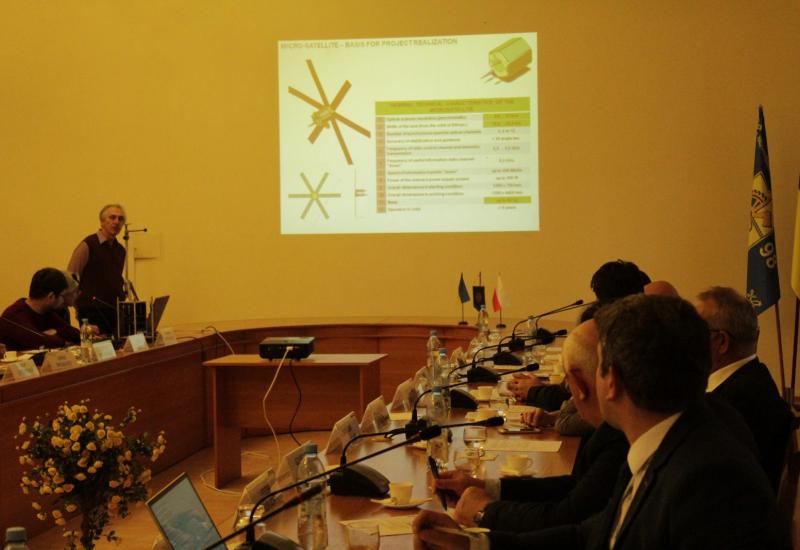 The delegation was headed by the president of the Polish Space Agency Grzegorz Brona, and it included the Director of the Defense Projects Department of the Agency Borek Rafal, acting director of the Strategy and International Cooperation Department Justina Sokolovska, Head of the sector of Defense Projects Department Pavel Khodosievich, President of Fibrain Sp.z o.o. Jan Kalish, head of the commercial department of the Institute of Electronic Technology of Materials Grzegorz Hawlík, Director of the Center for Space Technologies of the Institute of Aviation Leszek Liorokh, Professors of the Poznań Institute of Technology Krzysztof Veselowski and Rafał Krenz and others. The delegation was accompanied by the First Secretary of the Embassy of Ukraine to the Republic of Poland Oleg Kazanishchev and chief specialist of the International Projects Support Division of the Office of International Affairs of the State Space Agency of Ukraine Galyna Tsymbal.

Igor Sikorsky KPI was represented in the meeting with the representatives of the Polish space industry by the Deputy Vice-Rector for Scientific Work Yuriy Sydorenko, Vice-Rector for Scientific Work Ihor Lytvynov, Head of the Laboratory of Nanosatellites Borys Rassamakin, Chief Engineer of the Special Design Bureau "Storm" Serhiy Pukh, Head of International Projects Division of the Department of International Cooperation of the University Serhiy Shukaiev and others.

Eugene Kovalenko, a member of the team of KPI nanosatellite developers, told guests about the work on these spacecraft and the peculiarities of those already in the near-Earth orbit and those that are still being designed and built. In particular, it was a question of the nanotechnology "PolyETAN-3-PUT", which is created in cooperation with Poznan University of Technology (besides, this is also indicated by the abbreviation of the name of the Polish university in the name of the new nanosatellite). This device is developed for use in remote sensing of the Earth. Representatives of the PUT, Krzysztof Veselowski and Rafael Krenz, spoke about the developments and proposals for its systems and stages of design. The conception of creation of microsatellites grouping for remote sensing of the Earth designed at KPI and presented by Serhiiy Pukh was of great interest. This grouping should consist of six vehicles, that is, satellites weighing up to one hundred kilograms, which can carry significantly more payloads than nano satellites (we would like to recall that the mass of nanosatellites cannot exceed 10 kg). Micro-satellites, which Kyiv polytechnic researchers are currently working on, will have a number of serious differences from the existing devices, so they will be able to perform a wider range of tasks, especially as a part of a grouping. The participants of the meeting discussed some of the purely technical issues of created university space technology and the possibility of expanding cooperation.

Finally, Grzegorz Brona, on behalf of the members of the delegation, thanked for the meaningful conversation and promised to facilitate the implementation of the joint space project of Igor Sikorsky KPI and PUT, and also expressed confidence that the development of cooperation between the space industries of Poland and Ukraine could become one of the main directions of cooperation of our countries.

In the photo: Serhiy Pukh gives a presentation