Rectors of Polish and Ukrainian technical universities discussed in KPI problems of education, science and innovation integration and agreed the lines of further cooperation 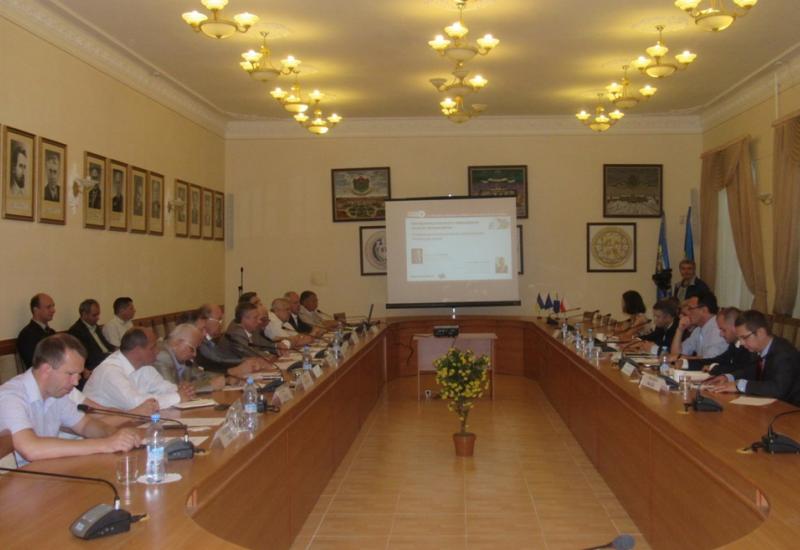 Representatives of Polish educational fund «PERSPEKTYWY», Rectors Conference of technical universities of Poland and Council of Rectors Association of higher educational establishments of Ukraine discussed problems of education, science and innovation integration in the context of cooperation between Ukrainian and Polish technical universities at the round-table meeting “Combination of education, science and innovation – the main line of Ukrainian integration into European system of higher technical education”.

The round-table meeting was hold at National technical university of Ukraine “Kyiv polytechnic institute” on the 22 of August.

“Cooperation between higher educational establishments of our country has deep history. As a matter of fact, over the last 20 years of XX century is has slowed down due to some well-known reasons but nearly since 2000 our relations started recovering and became more active. The Polish educational fund «PERSPEKTYWY» became an initiator, - stressed the head of the Council of Rectors Association of higher educational establishments, rector of NTUU “KPI”, academician of Ukrainian NAS, Mykhailo Zgurovskyi opening the meeting. At present 120 higher educational establishments of Ukraine and Poland have fruitful cooperation. The number of universities that are setting partner relationships is constantly increasing. Their cooperation is developing according to different lines and programs. In particular, at the last stage of TEMPUS program, Ukrainian universities took part in 94 projects, moreover in 22 of them their partners were Polish universities…” He also noted common projects that proved their effectiveness and suggested a series of lines that could appeal to both parties.

The president of Polish educational fund «PERSPEKTYWY», Waldemar Sivinski provided participants of the round table with quite interesting information on the activity and further plans of this organization. In particular, he gave emphasis to the opportunities that Ukrainian and Polish universities are offered after the meeting with Minister of Education and Science of Ukrain, Liliia Hrynevych as well as Vice-President of the Minister, Minister of Research and Higher Education of Poland, Yaroslav Hovin that was hold in the end of June this year. Besides, he offered to held large-scale forum of Ukrainian and Polish scientists and teaching staff on the basis of NTUU “KPI” in April next year. Its subject matter will cover not only the range of problems of higher education but issues of education, science and innovation in both countries as well as cooperation development to increase their effectiveness in general.

Being the Vice-President of «International Observatory on Academic Ranking and Excellence» – organization that deals with the issues of moderation of universities and their places in international environment, Waldemar Sivinski spoke also about the work aimed at improving university moderation system in different regions of Europe, in particular technical ones. In addition to this, director of Center of independent accreditation of engineering programs established by the Rector Association of higher technical educational establishments of Ukraine delivered his speech devoted to particular issues of adaptation and certification of engineers training programs as well as their compliance with the standards of European countries and considering experience of Polish colleagues in this activity.

Deputy Head of Council of Rectors Association of higher technical universities of Ukraine, rector of National Mining University, Hennadii Pivniak, rector of National technical university “Kharkiv polytechnic university” Yevgen Sokol and rector of Kyiv national university of construction and architecture, Petro Kulikov spoke about experience, particular issues of organization and a theme in the scope of which the cooperation between Ukrainian and Polish technical higher educational establishments has to be elaborated. An emphasis was put on innovative activity of universities and creation of effective motivation for all participants of this process. Certainly, in the scope of interest was a presentation by general director of Scientific Park “Kyiv polytechnics” that is the center of innovation ecosystem of NTUU “KPI” «Sikorsky Challenge» Volodymyr Hnat and the manager of start-up school  «Sikorsky Challenge», Inna Maliukova. Beside the point, they informed about the decision on the creation of similar start-up schools in ten technical universities of our country and expressed hope that this project would extend to Polish higher educational establishments.

Representative of Polish Politechnichnika Opolska, specialist in issues of international cooperation Grzegorz Stankiewich elaborated points brought up by Ukrainian colleague. He informed participants not only about possible opportunity lines of Polish and Ukrainian scientists but also up-to-date proposals for their common participation in projects of National Center of Science (NCN) that provides fundamental research with funding that is original research, experimental or research works without direct commercial application.

Finally, participants of the round table agreed their main lines of further cooperation in the context of European integration. Thus, these are:

3. Cooperation in the field of innovative development

After the round table meeting was finished, its participants went to the meeting with Ministry of Education and Science of Ukraine, Lilia Hrynevych.