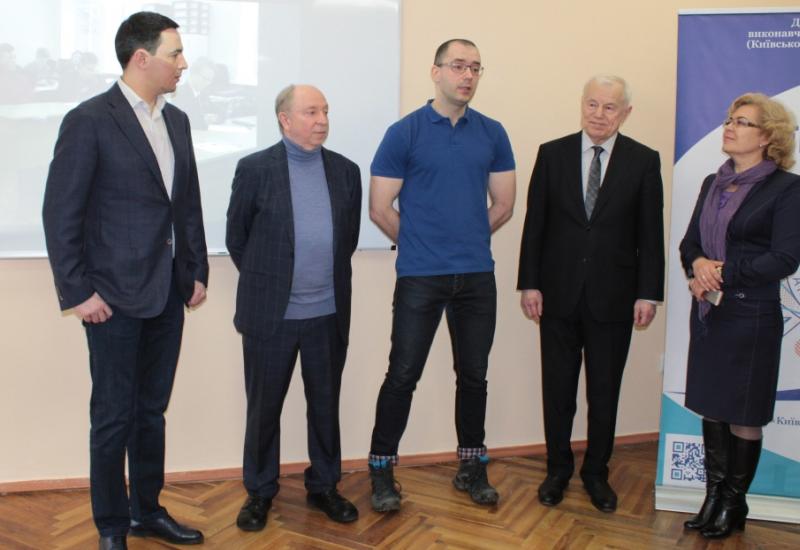 The opening of a kinder school of microelectronics “Lampa Kids” was on March 6th. It is working at the building №12 of Igor Sikorsky Kyiv Polytechnic Institute, where the Faculty of Electronics is situated.

“ The problem of involving the youth in technical creativity, high technology is really actual in Ukraine”,- Yuriy Yakimenko emphasized, opening the ceremony, “Because today’s children have to become the creators of scientific and technical progress. If not in Igor Sikorsky Kyiv Polytechnic Institute, that is the leader of technical education in Ukraine, so where new kinds of work with them can be implemented?

The Kyiv Council’s attention to the project “Lampa Kids” is not by accident, as it is implemented according to Kyiv public budget and it was given about 1 999 000 gryvnas on creating that kinder school.  “When we first touched on the theme of creating Kyiv public budget three years ago, we had tones of critics.”- Volodymyr Prokopiv said. “You even cannot imagine how glad I was on the opening “Lampa Kids”. If we tell that the field of IT has to become the leader in our country, we should find out that the development of the fields is impossible without people working there and a good equipment they will be studying on.”

The idea of kinder lab-school organization belongs to the provost KEOA Chair of the Faculty of electronics in Igor Sikorsky Kyiv Polytechnic Institute Ievgen Korotkyi. “The main goal of this project is to create a school where it would be possible to prepare future proficient implementers not only of the software, but microprocesses. That is because the programs need “iron” to work”,- he told to the participants of the ceremony.”We wanted to create the lab with  modern equipment , where: 1) education would be free, and 2) we could give our students deep knowledge. Particularly, here it would be taught such courses as digital microelectronics and projecting microprocesses. There would also be a unique course of digital radiotechnics, where pupils would study to connect with the satellites through the video and radio signs. There would also be typical courses.”

Global experience claims that pupils could be easily taught to deal with modern equipment. All we need are  qualified professors and school material. “Lampa Kids” wouldn’t have troubles either with the first nor second items. According to the Ievgen Korotkyi’s words, only university professors would teach your children and there would be the best in the whole country. There are precision measuring Keysigh instruments, Tektrinix oscillogrape streaked with transmission up to 1 GHz and spectral analyser up to 3 GHz, power and qualify supply sources, microcircuit card with Intel FPGA programmable logic control for creating processors and digital microcircuit, Lego Mindstorms microcomputers for studying robotechnics, SDR-systems ETTUS B210, 3D printers and others. Beyond any doubt, there would be available powerful PC. That is why here you could do labs with students in the first part of the day, and then this equipment would be brought to junior experimentalists and inventors and their teachers.

So, new Igor Sikorsky Kyiv Polytechnic Institute’s laboratory, where young citizens will be able to join the deep studying of basis of electronics, development microprocesses, robotechnics, programming microcomputers and 3D print is already opened. Meanwhile, pupils aged from 13 years and upper will be studying here. However, due to the organizers’ words, it will be possible for children aged from 9 years.”Lampa Kids” will be working for six days for a week.