The Man of past and future Renaissance [scientist-paleontologist and science fiction writer I. Yefremov] 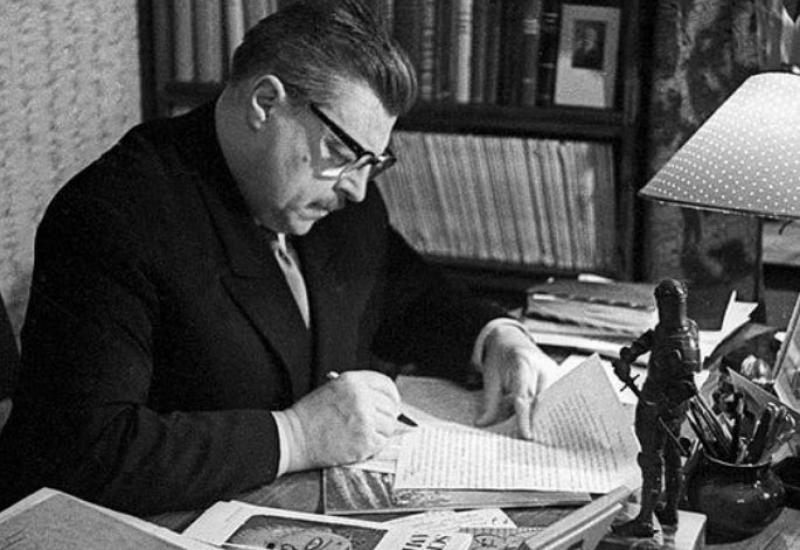 One hundred years ago, on April 22, 1908 Ivan Efremov paleontologist outstanding scientist and science fiction writer was born. Somebody, however, mentioned this event a year ago, because the writer in his youth to find work added some years to his age. But what means a year for a person who in his scientific and literary works naturally operated with the all geological and social eras.

The life of Yefremov looks like a novel. He was born in a family of merchants, he had experience in being homeless, being the member of mechanical transport company, loader, driver, sailor, geologist, paleontologist, the founder of a new field of paleontology "taphonomy", writer, who was noticed and invited to talk by Alexei Tolstoy, finally, the founder of soviet science and soviet social fiction. But he wasn’t a student; Yefremov graduated in 1935 as an external student from Leningrad Mining Institute. But, barely received a degree, he became a PhD, and after five years - professor.

Yefremov began his literary career in the early 1940s, because of his concerns about the strong bias of public opinion towards science and technology at the expense of the soul and human feelings. He was convinced that science leads in vain, if there is not philosophy behind, showed that scientific progress must be accompanied by moral progress, otherwise there won’t be future of humanity, "and there will be sand and dust on a dead planet." According to the writer, the main engine for progress is not a perfection of technology, but the human evolution (and this law is common to all space). The human being is a future measure of all things, and the science and its discoveries obey the development of human being.

In spite of the stories and novels, in which he predicted the discovery of diamonds in Yakutia and the introduction of holography, Ivan Yefremov wrote only four major novels ("Andromeda: A Space-Age Tale" (1957), " Razor's Edge" (1963), " The Bull's Hour" (1968 ) and " Thais of Athens" (1972)), but each of them was an event. They became, as it is said now, "iconic" for generations of readers.

The first and perhaps the most famous was utopian novel " Andromeda: A Space-Age Tale ". It tells about the Great Ring of civilizations of the universe and the beautiful, "unquenchable to exploit" people (actually, the author is tall, handsome, strong man, with the bass voice and perfect pitch, lexicographer, a distinguished scholar and a talented writer and he is largely resembled to his characters), the sincere human relationships and about the planet, which its inhabitants have transformed into a blooming garden of the world, where people have really more worth affairs than the "make money" or "fulfil a high guidance." This novel made his author famous in the whole world and helped to define the life choices of many famous people, from astronauts to teachers-innovators. Even George Lucas the author of "Star Wars" was so impressed by the novel of Yefremov, so G. Lucas called his Darth Vader in honor of the hero Dara Viter.

He continued the line of "Andromeda" in the novel-warning «The Bull's Hour", where the bright future of the Earth countered with gloomy dystopia of the Tormans, led the world with oligarchy that has come to a standstill evolution. The violation of the basic law of evolution - parallelism and interdependence of scientific, technical and moral progress - leads to an inferno: continuous, endless and hopeless suffering. Some thoughts of the novel seemed so seditious, that it (the novel) were removed from libraries and forbidden to republish during 18 years.

Yefremov also doesn’t strike a chord with new times. The imposed public belief that modern capitalism is the highest and last stage of human development, and human being is a greedy, lazy animal that cannot be reeducated and requires constant control, does not connect with the ideas of the writer. Yefremov appeals for more, saying that you do not think that you are the highest level of evolution, you are only a highly organized animal, which is doomed forever to torment similar to itself and submit them! He encourages people to remember about their higher purpose. Refusing dreams, utopia, future is the most terrible mistake of modern society, but maybe reading Yefremov, it will find the strength to correct it?