A student worthy of his mentor. Win in the competition 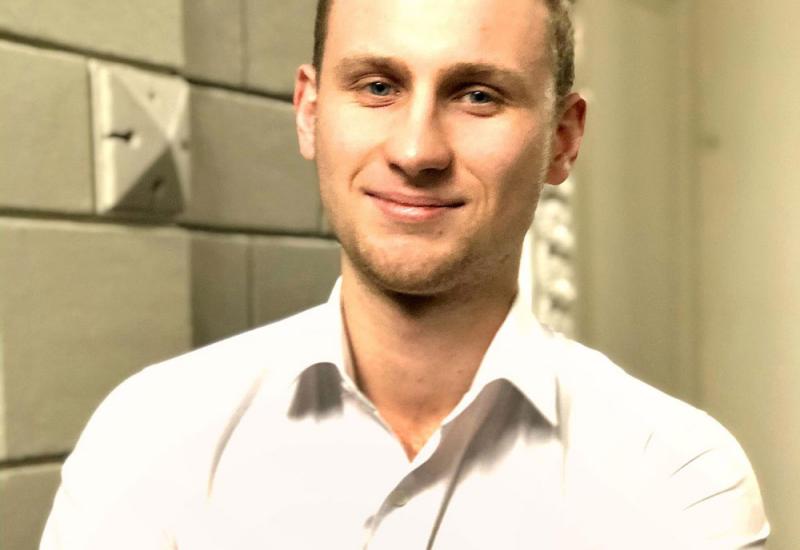 According to the results of the second round of the All-Ukrainian competition of student research papers in the speciality "Applied Mechanics (Mechanical Engineering Technologies)" in 2021, the first degree diploma was awarded to a student of the Department of Mechanical Engineering Technology of MMI Vladyslav Pylypiuk  for scientific work "Solving the problem of basing the workpiece at its arbitrary location on the machine with CNC" (supervisor - cand. of tech. sciences, Associate Professor V.K. Frolov). The competition was attended by 48 students from 21 HEI  of Ukraine. He was ahead of everyone by more than 4 points, when the difference between the other participants was sometimes around 0.1 points.

Vladyslav Pylypiuk, now a first-year master's student, received a bachelor's degree with honours, and upon entering the master's program had the highest rating score among entrants. After graduating, he plans to enter graduate school. He has co-authored 14 scientific papers with the supervisor, including 6 articles and abstracts of conferences, has 7 patents of Ukraine for a utility model and a certificate of ownership of a computer program. He receives a nominal scholarship from the President of Ukraine.

The method of digital photography of blanks, proposed in the work of Vladyslav allows to ten times reduce the time for the process of basing (orientation in space) of the workpieces during their processing on CNC machines. Previously, not so cheap contact sensors in the form of probes for the so-called "virtual" basing were used for this purpose, but now the instant photo of the processed workpieces is compared with the reference image and the control program is automatically adjusted. Methods for determining the position of workpieces of different configurations for different types of machines based on this principle have already been patented. Patents have also been obtained for systems for controlling the location of workpieces on CNC machines of milling and turning groups.

Approbation of new methods of basing was carried out on the equipment of the educational and training center "KPI - HAAS", created at the Department of Manufacturing Engineering. The results of the experiments were satisfactory, so now for the implementation of the proposed innovations, image recognition software using artificial intelligence is being created.

The engineering profession in Vladyslav's family is hereditary. Parents are engineers in the textile industry by education, they worked at the Kherson Cotton Mill (united 4 factories, produced up to 200 million running meters of fabric per year). But the difficult 90's showed, textile productions disappeared from the map of Ukraine. It is said that everyone has their own guiding star. Then for Vladyslav the stars formed into a favourable pattern. The family moved to Kyiv, Vladyslav graduated from the Kyiv Gymnasium of International Relations with in-depth study of English №323.

In high school, the young man became interested in the precise sciences, and his hobby was the study of military machines of the World War II. He was especially interested in the design features of the machines of that time. This hobby has become decisive in choosing a future profession. And the stars helped again. The "big family council" came to the conclusion that studying "Manufacturing Engineering" at MMI will provide basic knowledge in the field of applied mechanics, information systems and technologies of mechanical engineering and welding based on modern digital technologies and computer technology to work at the advanced enterprises of machine-building or aircraft-building branches.

A guiding star for a student at MMI was his supervisor V.K. Frolov, whom he met in the 3rd year during classes on mechanical engineering technology. An inquisitive, intelligent young man responded enthusiastically to Volodymyr Kostiantynovych's offer to take part in scientific work, find and systematize publicly available articles on a given topic, perform a patent search, select the necessary equipment for field experiments, and so on. An interesting search, joint creativity captivated both.

A mentor to whom success is due

When the phrase "Teacher, bring up a student, so that then there is someone to learn from in future" is mentioned, it is about V.K. Frolov. How many of them, students, passed "through his hands.” No, not so - they passed through his heart. Because only a person who is not indifferent and passionate about his work is able to generously give his knowledge, skills, make the work you do appealing for new and new students.