"To see a particle of God: what horizons opens CERN and the world science" - that is a name of an open lecture, which was read by the renowned German scientist Rolf-Dieter Hoyer at the KPI on November 20th.

The lecture was organized with the assistance of the Small Academy of Sciences within the framework of the visit of Professor Hoyer to Ukraine.

The audience was able to get information on the most up-to-date research and discoveries that is called "firsthand": Professor Hoyer, now a president of the German Physical Society, headed the famous CERN from 2009 to 2015 (the French abbreviation of the "Conseil Européen pour la Recherche Nucléaire" "- European Council on Nuclear Research). In other words, he was the head of the world's largest international research center, which carried out the most complex nuclear research and research in the field of elementary particle physics, which, according to the amount of funding and essence, was not at the disposal of any national program or scientific institution. Not without reason, at present CERN employs almost half of all researchers in the microworld - about 13,000 physicists representing more than 500 research centers and universities in different countries, not only in Europe.

In 2012, Rolf-Dieter Hoyer made a historic announcement of the experimental discovery by CERN employees at the Big Hadron Collider of the Higgs boson, which confirmed the theory of Brout-Engler-Higgs and became one of the greatest discoveries of the 21st century. The Higg's boson is an elementary particle that, according to the Standard Model, arises from the Higgs mechanism of the spontaneous violation of the electroweak symmetry and gives the mass of other elementary particles. In other words, without a Higgs boson, no elementary particle would have a mass, that is, there would not be a world. Because of this, the Higgs boson is sometimes called "a particle of God," or "Divine Particle."

However, Professor Hoyer's lecture for Kyiv Polytechnicians, students of other Kiev universities and the schoolers of the Small Academy of Sciences, Professor Hoyer, began not from the Higgs boson, but from the story of CERN and the discoveries of its employees. "CERN is a vivid example of how Europe and its partners can develop when they are united to achieve certain common goals," he said.

The idea of science as a powerful unifying factor and the fact that CERN is the area on which science develops the skills of a common constructive activity for all mankind, was the red threadthrough the whole performance of Rolf-Dieter Hoyer. According to him, one of the positive examples of the practical application of the results of such a joint activity was the hadron therapy, which today is considered the most promising method of treatment of malignant tumors - it has already allowed heal more than 100 thousand people. Hence, by the way, another fundamental situation emerged, on which the attention of the listeners was emphasized by Professor Hoyer, - that it is impossible to break the range of fundamental and applied research, because such a gap inevitably leads to the loss of both fundamental and applied science.

Of course, he also told about the principles of the Great Hadron Collider, the organization of his ATLAS detector experiment with the same name, involving more than 3,000 physicists and engineers from 40 countries. On this detector, scientists inter alia are investigating the properties of the Higgs boson, because, as the lecturer observed, the discovery of this elementary particle is not the ultimate discovery and, consequently, the successful completion of the quest, but the beginning of a new work on the study of the laws of the creation of matter.

Finally Professor Rolf-Dieter Hoyer answered numerous questions from the audience. They were interested in the peculiarities of experiments on the Big Hadron Collider, the properties of the Higgs boson, and even about what were the responsibilities of the lecturer when he headed CERN. 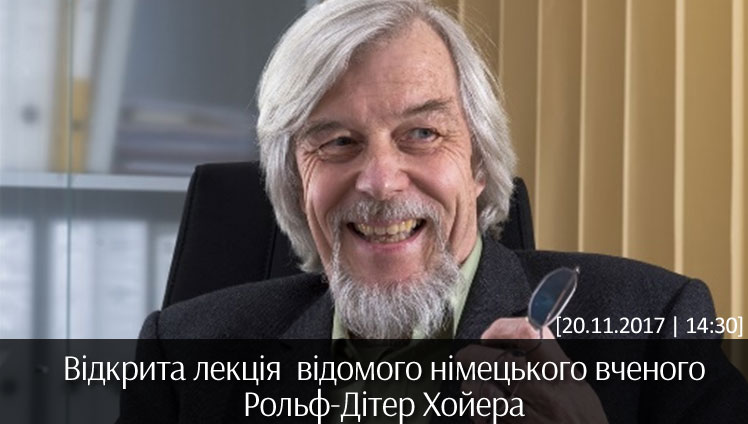 On November, 20, Igor Sikorsky Kyiv Polytechnic Institute will host the public lecture of a famous German scientist, Rolf Dieter Heuer. At present he is the President of the Deutsche Physikalische Gesellschaft, and since November, 2015 – the member of High Level Group of Scientific Advisors (SAM), which was created recently by the European Commission.

The lecture is planned in scopes of Rolf-Dieter Heuer’s visit to Ukraine on 20-21 of November. The visit is conducted in association with the Minor Academy of Sciences of Ukraine.

All concerned are invited to attend.

Professor Rolf-Dieter Heuer was born on 24, May, 1948 in Boll, Stuttgart County. He is a German particle physicist and was the Director General of CERN from 2009 to 2015. Since 2016 he has been the President of the Deutsche Physikalische Gesellschaft.

Till 1983 Rolf-Dieter Heuer worked in JADE experiment (the abbreviation of the participating countries, Japan, Germany, England) on the basis of the biggest German research center DESY.

1994-1998 – Rolf-Dieter Heuer was the head of OPAL experiment, which has included approximately 300 physicists at that time.

1998 – He became the professor of the University of Hamburg.

2004 – He became the Chief Officer of the research-scientific field of DESY lab.

2009 – Rolf-Dieter Heuer replaced Robert Aymar on the post of Director General of CERN.

Currently he is President of the Deutsche Physikalische Gesellschaft and since November 2015 member of the High Level Group of Scientific Advisors (SAM) recently set up by the European Commission.

In 2012 professor Heuer made an iconic announcement about the experimental discovery of Higgs boson in CERN laboratory. The discovery has proved the theory of Brout–Englert–Higgs and has become one the biggest scientific discoveries in the 21 century.