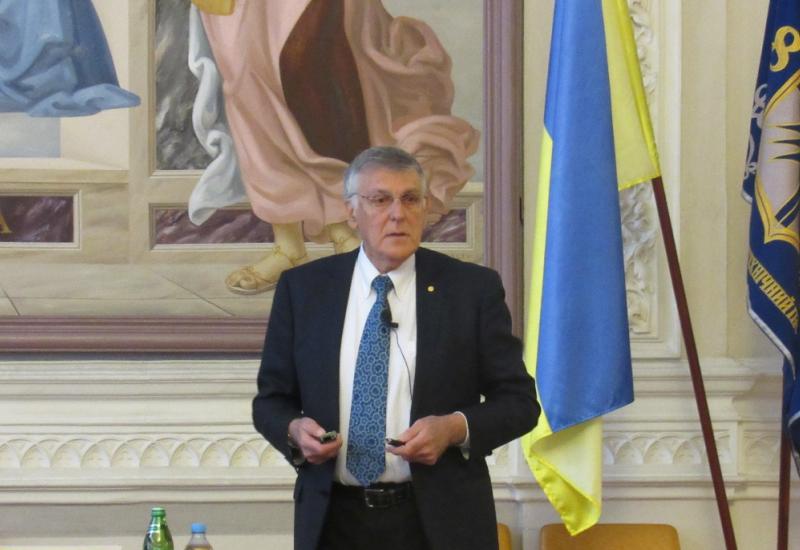 It is worthy to note that the visit of Daniel Shechtman was on the Israel Day through the help of Israel Embassy in Ukraine and Israel culture center.

The room of Academic Board was full of people, regardless the students’ holidays. Not nly students and postgraduates of KPI attended the lecture of renowned Israeli chemist, physicist, professor of one of the leading technical higher educational establishments – “Technion” university (Haifa city, Israel), Nobel laureate 2011 in the field of chemistry for quasi-crystal discovery, Daniel Shechtman. There were also senior academicians as well as undergraduates – future Masters, the teachers of other Kyiv higher educational establishments and members of scientific and research institutes of Ukrainian National Academy of Science.

There is no wonder – NTUU “KPI” became the one university, where professor Shechtman delivered lecture.

There is no point in explaining that the lecture has been devoted to the essence of his discovery - – «Quasi-Periodic Materials a New Definition for Crystal» (it is worthy to note that the lecture on quasi-periodic materials and new definition to the notion “crystal” was delivered in English language). This issue itself is one the most interesting since the discovery of quasi-crystals along with the discovery of nano-crystal materials, amorphous metal alloys and high-temperature semiconductors in scientific world is considered to be the most significant achievement of material sciences of ХХ century. Nevertheless, Daniel Shechtman spoke on these things in terms of crystallography history of ХХ century, moreover arising those questions that are considered to be the accomplishments of science history (the matter is about “Fibonacci numbers” and more significant “Penrose parquet”), and the fact how these accomplishments are used for description of quasi-crystals structure. Professor also spoke on the fact how difficult was his discovery on the way of its acceptance by “fellow workers”. Particularly, the first article devoted to quasi-periodic crystals discovery, was not accepted for publications in scientific magazines since it was considered as “uninteresting for physical community”. However, the further laboratory work gave new experimental proofs of materials existence characterized by rotary symmetry of 5 hours and higher (8, 10 or 12) orders that cannot be in crystals and quasi-periodicity in atoms positions, thus the notion of quasi-crystals not only became usual but led to making corrections in some notions of crystallography.

In terms of his lecture, professor Shechtman expressed his thoughts on the main constituents that made discoveries in crystallography and any other scientific branches as well possible.

In the end, Daniel Shechtman answered questions of the audience. Notably, this part of the meeting was initiated by the deputy of Ministry of Education and Science of Ukraine, president of Ukrainian physical community Maksym Striha and scientists of Ukrainian NAS.

Several questions were asked by students. Among the questions were about the fact who the guest considers himself – physicist and chemist. In his answer he said that those problems he deals with relate to chemistry, thus he received Nobel Prize in chemistry but started his scientific activity as physicist. In addition, the research of quasi-crystals are closely connected with chemistry, physics of solid body, mathematics and metal sciences and further studying of their properties is a great scope to their practical application in modern technologies. Moreover, professor Shechtman called student to study English diligently since it opens the door to the vast world of modern science that has no borders.

In the end of meeting, rector of NTUU “KPI”, academician of Ukrainian NAS, Myhailo Zgurovskyi presented memorable souvenirs to the guest and invited him to visit the university once again.

[27.01.2016] Invite to the lecture by Nobel Prize laureate Daniel Shechtman 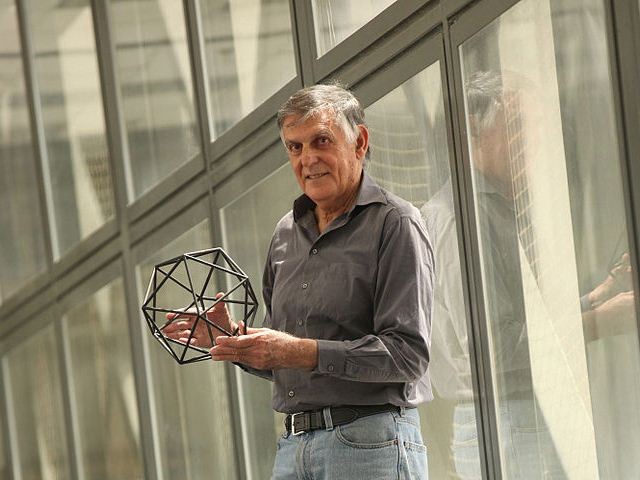 On January 27th Prof. Daniel Shechtman, Nobel Prize laureate, will give a lecture at NTUU “KPI” to scientists and students.

Prominent Israel physicist and chemist, professor of one of the leading higher technical educational institutions – Technion University (Haifa, Israel) Daniel Shechtman became Nobel Prize laureate in 2011 for his words in chemistry for opening ‘quasi-crystals’. He is a graduate of the famous university and has been working there for many years. Besides, he is an employee of the National laboratory of State Department of Energy in the USA that operates in Ames, (Iowa State) and is affiliated with the university of the state.

Professor studied the properties of titanium alluminates, quickly cooled aluminum and transition metals alloys. The research resulted in discovery of icosahedric phase and further opening quasiperiodic crystals. He also studied the influence of defective structures of crystals that were grown by the method of chemical deposits from gas phase, on its growing, properties etc.

Professor Shechtman was granted with the following awards:

• 1986 – Physics Award of the Friedenberg Fund for the Advancement of Science and Education
• 1988 – International Award for New Materials of the American Physical Society
• 1988 – Rothschild Prize in Engineering
• 1998 – Israel Prize, for Physics
• 1999 – Wolf Prize in Physics
• 2000 – Gregori Aminoff Prize of the Royal Swedish Academy of Sciences
• 2000 – EMET Prize in Chemistry
• 2008 – European Materials Research Society (E-MRS) 25th Anniversary Award
• 2011 – Nobel Prize in Chemistry for the discovery of quasicrystals