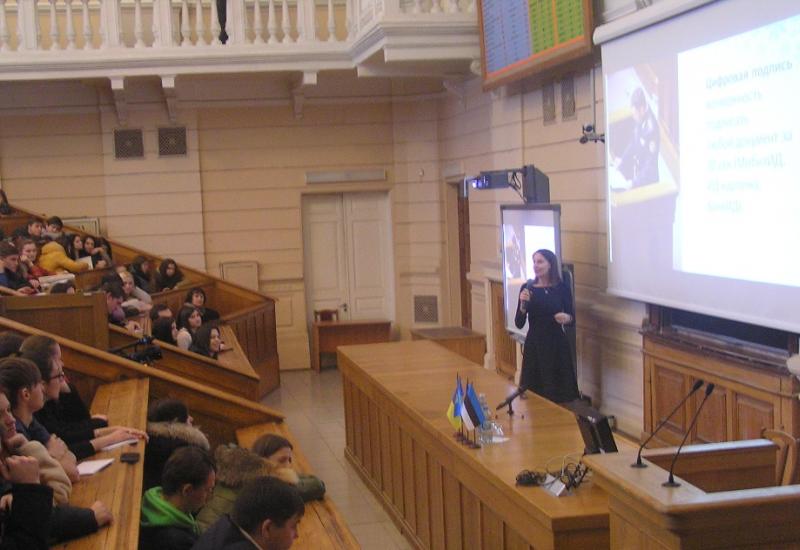 Famous specialist in information society issues, Yanyka Merylo gave a public lecture to the students of NTUU “KPI” on the 3d of December on the fundamentals of electronic management, the prospects of its implementation in Ukraine and difficulties on the way of “onlinization” of our country.

Yanyka Meryla was born in Estonia. She has been working in IT sphere for over 18 years. She has hold executive positions in investment funds of Europe for many years and deals with the fund raising to the markets of the Baltic states, Ukraine and Russia. She ranked among top 100 New Europe – the list of innovative leaders of the Central and Eastern Europe states that are compiled by Google and “Financial Times” for “the innovations that change the world”. Thus, her specialization is information technologies and investment business – at her time she even became the first woman in club of business-angels Estonian Business Angels Network (ESTBAN). Besides, she is co-founder of ІСТ Competence Center, and new technologies adviser of government executive of Lviv city, Andrii Sadovyi. She has been also an expert of State agency for electronic management of Ukraine. So, her lecture was truly filled with the information from the very beginning. By the way, she spoke good Ukrainian.

Yanyka Merylo spoke on the basic notions of electronic management that were aided with the slides. Thus, the listeners were able not only to hear, but also to see on visual aids what are electronic services (the chance to get any service or note from government without leaving homes that unable standing in queues and bribes), mobillD (instrument that enables in distance mode receive services, notes and sign documents via mobile), digital signature and electronic seal; what is exactly in electron business-register (information for beneficiaries etc) and why it is necessary (it gives an opportunity to create an enterprise in 20 minutes and declare profits in 5 minutes) etc. She has also showed ID cards, although Estonian one (a single card for services, signature, banking payments, transport, medicine, voting, discounts) and spoke on the changes in Estonia after its implementation.

The next part of the lecture related to the electronic part of citizens in management – the state has to hear their voices and it is an electronic management that gives such an opportunity. One of the instruments of such a part is electronic petitions that have already useful application in government management in Ukraine. But, the most important element of such a part is electronic products. Such form of organization of citizens’ will expression allows avoiding fabrication while counting votes and protocols filling, ensures increase in number of voters who take part in voting, reduces a time for summing up etc. Electronic voting is the kind of voting that includes both electronic means of voting and technical means of vote counting that make election process ultimately independent form the influence and intrusions of particular people interested in it. This system has been implemented in Estonia and it has already showed its efficiency. By the way, Yanyka Merylo spoke that during the last elections to self-governing authorities the similar system has been probated in Lviv. The results, actually, received in electronic mode while votes counting were counted and were not given to the members of particular commissions, but it has proved its complete applicability of such a way to vote and to use it in Ukraine. However, as Yanyka Meryla said, for its implementation one needs to have political will.

Finally, Yanyka Merylo gave answers to the questions of meetings participants. There were many of them but listeners mainly expressed their interest in the fact how many years it would take to build such an “electronic state” in her native Estonia. “15 years with a complete government support of this state at all levels and comprehensive facilitation form government structures” – she said. However, she added, it doesn’t mean that it will take as much time to create the same system in Ukraine. There is an experience of other countries that may be used, technologies are developing herewith. One must only work actively on this both ast the level of particular cities and at the level of the whole state. This work is not carried out everywhere – in some places government executives are still waiting for something, but if to choose between not to do anything or do at least something, so it is better to choose the last one.