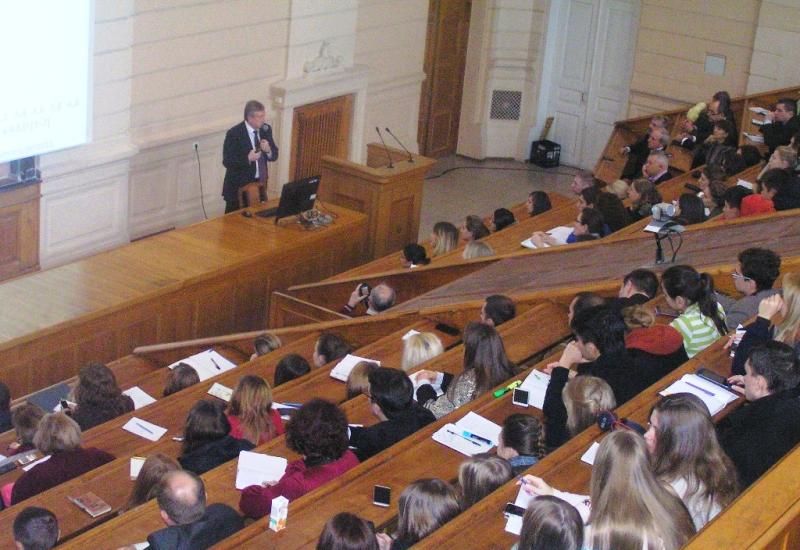 On November, 12th Mykhailo Zhurovskyi, rector of NTUU “KPI”, academician of National Academy of Science of Ukraine, gave a public lecture “Foresight of economy of Ukraine in medium-term and long-term (up to 2030) time perspective” for students and lecturers of the Faculty of Management and Marketing of NTUU “KPI”.

Lecture was announced on the page of one of social networks, so there were no free seats in the Grand physics lecture room before the start.

The research on prediction (Foresight) of the economy development of our country was done by the specialists of the World Data Center “Geoinformatics and Sustainable Development”, International Science Council Union (ISCU) that functions along with NTUU “KPI”, the Institute of Applied System Analysis and other departments of the university under the scientific supervision of Mykhailo Zhurovskyi. In general, 112 people took part in this project (50 of them were external experts).

Foresight of the structure of future economy of Ukraine was done on the basis on Delphi method (known also as “method of expert evaluation”) and SWOT-analysis (it lies in the division of phenomena and factors of internal and external influence on four categories: Strength and Weaknesses of a certain project or process, Opportunities and Threats connected with its realization. Methodology of “two axes” and “branch” was applied to build possible scenarios of future development of the economy of Ukraine. Along with it, Foresight (as you can see from the name of lecture) was done for two time periods – to 2020 and 2030. Thus, researches offered, or better, concluded that they obtained four possible scenarios of development of national economy for every period. Potential scenarios up to 2030 are definitely connected with those that are going to be fulfilled in Ukraine over the following 5 years. Besides, authors defined the possibility of fulfillment of each of them.

Unfortunately, according to M. Zhurovskyi the possibility that national economy would stick to optimistic scenario that would provide its balanced development is extremely low. Critical factors were named during the lecture. These are: tremendous gray sector of economy, huge-scale corruption and contraband, high load of pension on budget, increase of costs that serve to cover national debt, energy limitation of GDP of Ukraine. There were also clusters that could become main drivers of development of Ukrainian economy. First of all, they are: agriculture, military complex, information and communication technologies, creation of new material and substances, nanotechnologies, high-tech machine construction and others – nine positions in total. Besides, key marks were identified for high-tech development of the country at these periods of time. In order to make these drivers work we should change the functioning principles of the economy, refusing from raw material low-technological model of functioning and acquire innovative model.

It’s absolutely real since Ukraine has its own competitive advantages. “That is mainly concerned with human capital – mentioned Mykhailo Zhurovskyi. – That is, people with their knowledge, education, opportunities and communicative skills. They are the major competitive advantage of our country”.

“Foresight of the economy of Ukraine…” and, especially, its outcomes could become one of the crucial factors to make qualified decisions on economic development. That’s why there was an interest to this issue from the state authorities. We’re informing people about the seminar “Integration of innovative model of high-tech economy of Ukraine” that took place at KPI with the participation of the high officials from the Ministry of Economic Development and Trade on October, 31st (see http://kpi.ua/15-10-31). Meetings were also conducted with people who could made decision at correspondent level. However, familiarizing with the outcomes of “Foresight…” is important as well since they are the capital that was mentioned at the lecture. Furthermore, as Mykhailo Zhurovskyi mentioned at the end, one of the factors that could change the direction of the most pessimistic scenario of the development of our country is civil society, that is, active citizens.
Lecture ended with applause.