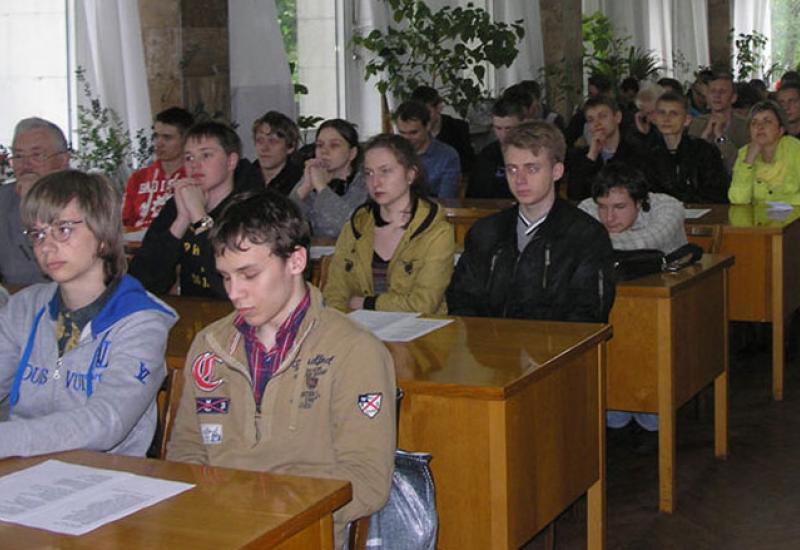 This year spring at our university as in the neighbor country is full of different events, devoted to the 200 annual of T.G. Shevchenko birth. On the occasion of this anniversary the collective of the chair of Ukrainian language, literature and culture carried out the literature contest and its final stage took place May the 15.

The fourth hall of library of NTUU “KPI” was filled by students: somebody went to support their friend, somebody wants to communicate with guests, but participants, of course were waiting the results of the contest.

Jury appreciated works of 19 authors, though there were much many interested: the graduator of Dnipropetrovsk university sent her works, the resident of Romny, student and pupil from Poland (but they didn’t tell their address). But they were refused according to the requirements of the contest as only students and staff of KPI could participate in it.

Jury marked the student of FEL Sergii Dolia as the best poet. To juries’ liking were bright icons and reflection about eternal questions of being. There were much more talented prose writers. The victory get: Viktoriia Polianska and Olga Rybanchuk (FL), Vladyslava Homa and Nataliia Androsova (FEL). Also Jury wanted to mark out the assistant professor of chemical and engineering faculty, Igor Kovalenko for sincere story - remembrance of Orange Revolution.

The winners of the contest read their poems and proses, and guests came out with their own poems and historical publications. The assistant professor of sociology chair V.V. Pavlovskii opened the event with the modern understanding of Taras Shevchenkos’ works. As usual with the humour the assistant professor of MMI Vilalii Ivashenko came out with the stories about his life and creations. It is not a secret that he is founder and producer of the students’ amatory theater “ETA”. That’s why this day the author of 14 poetic collections, Meritorious Artist of Ukraine motivated the young audience with his poems – little –drops to laugh and deep thinking on the life. And presented his books with the autograph as a keepsake to everybody interested.

The came out of M.V. Luliniuk, the teacher of the chair of chemical automation was relevant. Mr. Myhailo not only writing poetical and prose compositions but gathering young writers together: students and teachers. He was the redactor and founder of poems almanac of teachers and students and KPI graduators “Shyrogo Serchia slova: z politechnichnogo Parnacu”, published in 1998 to 100 anniversary of NTUU “KPI” and soon became the main redactor of literature and artistic almanac “Kryla” Myhailo Vukiniuk read one of his historical and publicistic article related to the works of the Great Kobzar, from his new book.

With a great inspiration everybody listened the poems of Dmitrii Lazytkin, the graduator of Kiev Polytechnic University. Nowadays Dmitrii is not only the laureate of literature prizes but also the author of poetic collections, journalist, sport reporter and the owner of black belt of kempo, champion of Ukraine in kozaks duel, silver laureate of world cup of kickboxing and kickdzychu, master of sport in wuchu –sanda. Students were quite surprised with the fact how people can combine “Physics and lyrics”, didn’t lose themselves in their lives, didn’t changed their soul on nothing.

The winners of literature contest were awarded by the prizes – valuable not only in material cense but also in mental, as for a great amount of literature beginners the first recognizing of their works is very important.

Young writers, we want to wish you recognition and inspiration!