Robotic framework of MMI at the contest of start-ups 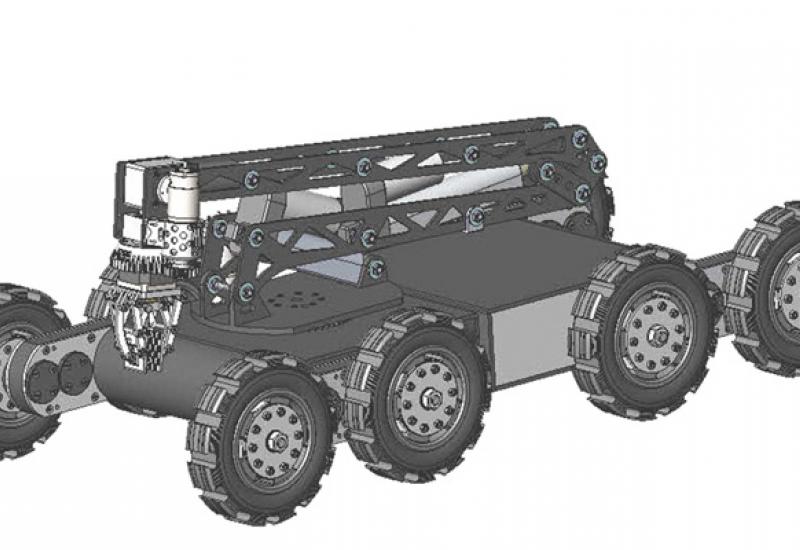 The design of the Department of Dynamics and Strength of Machines and Strength of Materials “Universal mobile multifunctional robotic system of high passability, manoeuvrability and survivability” was demonstrated in the final of the VII Festival of Innovative Projects “Sikorsky Challenge”. This is a mobile multifunctional landing gear for a removable mounted equipment. Wheel-walking dual propeller and pivotally connected performance of the landing gear housing provide high passability on a common location and manoeuvrability on compact territories. On the basis of the following landing gear, a robotic system equipped with six-step manipulator, systems of remote control and machine vision, is projected.

Tasks. Due to modern progress of science and technology, robots and robotic systems are used in many spheres, particularly in building, geosynoptics, during repairs of utility networks, during implementing special tasks, especially those which threaten people’s life or health (accident responses, emergencies and work in high-threat environment), etc. Complicated robotic systems are also used for planetary explorations. While projecting such systems, the increased demands for the sizes, passability, autonomy of functioning (mobility) and for set of tasks are included. That is why scientific researches, which relate to improvement of existing robotic systems or to the development of the new ones, are up to date and are of obvious applied importance. The development of robotic systems cause the need to design new mathematical models and applications based on those systems.

Research. The most intensive development and study of robotic systems is carried out in the USA, France, Great Britain, Japan, Israel, China and Russia. Today numerous variants of structural schemes of landing gear exist. Modern level of science-technological progress causes increasing usage of mobile robotic systems of increased passability. In Ukraine the government program of robotization is only being developed. Recently developed national robotic systems “Fantom”, “Laska”, “Myslyvets” and others can not overwhelm the whole range of the tasks set for such systems.

At the Institute of Mechanical Engineering. A locally produced robotic system of high passability based on eight-wheeled landing gear is designed with participation of young scientists and students of Igor Sikorsky Kyiv Polytechnic Institute. A concept of a framework for robotic system made is new and competitive in the world market (see Fig.). Effective methods for solving a range of applications were developed for the concept. In particular, the methods of analytic and computational modelling of dynamics of a landing gear while overcoming obstacles which are equal to the sizes of the gear, and a method of defining of load which affect the components of the gear. A new approach to modelling of the components including topological optimization of the components for further additive production is also presented. In addition, a parameterized three-dimensional model is designed, as well as an appropriate program for calculation of geometrical parameters of a landing gear and calculation of strength of crank-type planetary reducing gear components. This reducing gear is a component of an actuating device of a landing gear with wheel blocks. Also a new method of defining coordinates of the location of a landing gear using the system of technical vision is proposed. With help of this robotic system numerous theoretical works of professionals in the sphere of complex robotic systems control can be tested, with help of navigation systems, systems of technical vision, connection, etc. During implementation of the project a range of numerous experiments are made, new methods of automatized modelling of components are tested. The results gained can be contributed to the basics of new scientific researches.

Participation of the young. Talented students of the years 2 to 6 participate in the development actively. They solve real separate applications related to modelling, researching and manufacturing of a landing gear. They got certain experience of work in team and they continue to improve their designs. Obviously, just like modelling, scientific work in general consists of both theoretical knowledge on particular level and of certain qualities of a developer like perseverance, attentiveness, interest in results and, the most important, responsibility and enthusiasm which are, in fact, demonstrated by the students who take part in development.

The participation of students and young scientists in the development of robotic systems is essential because of rapid scientific and technological progress and the government program of robotization. The expenses on such projects are significantly less than on the procurement of foreign models. It is also a support of talented youth of the university, which is extremely essential on conditions of modern economics of Ukraine.