From the history of the monument to Taras Shevchenko in Kiev 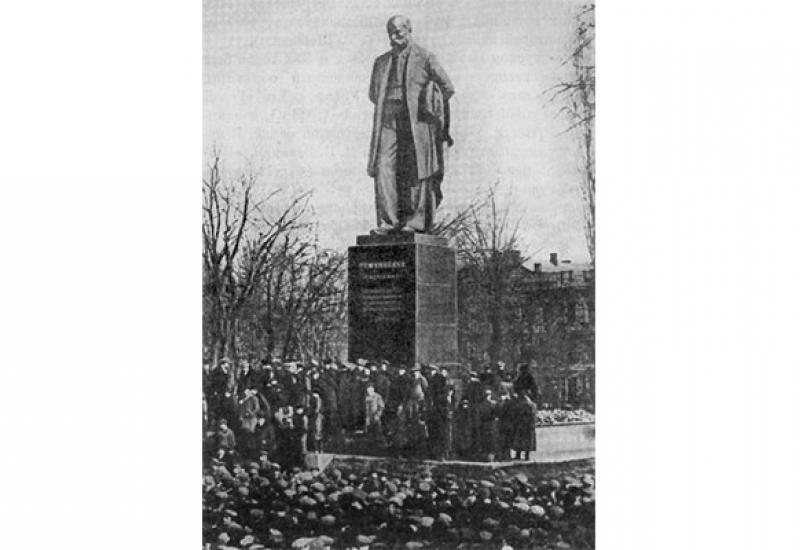 Monument to Taras Shevchenko in Kiev has long been the center of all activities associated with the name of the Great Ukrainian and at the same time one of the symbols of the capital. However, yet not so long ago, as you might think, knowing that the deep respect with which our people refers to Taras Shevchenko. Monument in front of the "red" building of Kyiv National University, which is also named after Taras Shevchenko, was opened March 6, 1939 - exactly 75 years ago. Open from the fifth attempt, after a long struggle for the very possibility of such a perpetuation of the memory Shevchenko!

In general, the world's first monument-bust to Shevchenko was created in 1899 by the famous Russian sculptor Vladimir Beklemishev in St. Petersburg. This bust was acquired by the family of famous Ukrainian public figures and patrons Alchevskys and installed in their front garden in Kharkov, replacing blank fence by lower grille (now the bust is on display at the Museum of Taras Shevchenko in Kiev).

The idea of ​​creating a large monument in Kiev have been widely discussed among democratically-minded people of "Southwestern Region" and their compatriots in other cities of the Russian Empire in the early twentieth century. The issue is with the approach of the 50th anniversary of his death (1911) and the 100th anniversary of the birth of Shevchenko (1914). Perhaps, Poltava residents put it the first on a practical footing: in 1904 at the initiative of Zolotonoshskiy Zemsky assembly they began to raise funds for such a monument. The initiative was publicized, and their funds for the construction of the monument the Ukrainians living in the Russian Empire began to send to. In September 1905 by the decision of the City Council in Kiev a special committee was organized on the construction of the monument to Taras Shevchenko. Committee formed the jury for the competition of better monument design, in which, incidentally, was included a teacher of KPD, famed Ukrainian artist Nikolai Pimonenko. A sculptor, author of the monument to Ivan Kotlyarevsky in Poltava Leonid Posen was elected as a jury Chairman.

Not everybody liked the plans for the celebration of the centennial of "peasant poet". Government leaders and officials at various levels were worried that the celebration of the century Shevchenko may acquire political overtones, even escalate into anti-government protests. Life has shown that these fears really justified, but in many ways they were the cause of foolish decisions and actions of the very same power, perseverance and sometimes insidiously turns out to be an obstacle in the organization of celebrations. Representatives of some non-governmental organizations monarhichical direction also ctively prevent the perpetuation of the memory of Shevchenko. These faithful servants of the regime extremely painfully struck by the fact that at first competition to design a monument to Shevchenko in 1909 64 works were presented, while at the competition to create a monument to Alexander II, who in the same period took place in Kiev, - only 20.

However, despite the abundance of submitted projects, none of them could satisfy the jury. Therefore, a new competition soon was announced. February 15, 1911 the jury, which is now headed by the famous Ukrainian artist Athanasius Slasten, examined 46 projects submitted, and again, the winner was not determined. First prize was not given to anyone. The second was awarded teacher of art school in Kiev and ceramic college in Mirhorod Fedor Balavensky, the third - the student Slastion sculptor Michael Gavrilko.

Meanwhile, there was a struggle for a place for the monument in the city. Members of the Russian nationalists club made a fuss that, it's impossible to put monument of the poet, who all his life was an enemy of the monarchy, there, at St. Michael's Square in front of "Russian educational institution" (there is to be the first real school), and proposed instead to install  a monument to Princess Olga. In the end, the city decided that the monument Shevchenko, which has already been given "the highest" permit should be constructed at the intersection of Grand and Karavaevskaya Vassilkovskaya (now - the area of ​​Leo Tolstoy). It looked like a mockery -almost opposite the future monument located Karavaevskaya baths and close there was ultra-right monarchical publishin house of the newspaper "Kyivlyanyn", alse there were scattered around  untidy little shops. Therefore, the Joint Committee did not agree with the decision. Ukrainian public also was agains it. Letters and appeals were sent to the Kiev powers, members of the Joint Committee and in Kiev newspapers, the authors are not only outraged, but also offered their places for  monument. In the end, the Committee focused on the two versions. The main site was chosen on the steep slopes of the Dnieper Peter's alley, park on the famous Paton bridge and  replacement - Vladimir Hill in front of Alexander's church. However, the City Duma insisted on his own.

Balavensky, whose project  the  Joint Committee proposed to modify, could not or did not want fit it into the space Karavaevskaya area. Therefore, third contest was announced.  The results were discussed in December 1912. The jury again did not support any of 37 submitted projects. Therefore, in May next year, the Joint Committee has announced a contest again and personally invited to participate in it known Ukrainian and foreign artists. Summing up the results took place in February 1914. The jury finally decided, after some changes, to erect a monument designed by the Russian sculptor Leonid Sherwood. But the Committee, whose composition, as well as the composition of the jury, repeatedly updated, this solution has not approved and announced the winner  the Italian master Antonio Shiortino, a project that was initially experienced severe criticism from both experts and representatives of patriotic Kiev. It is extremely angered some of its members. "Given that the decision of the Committee at the meeting of the 3rd February 1914 on the establishment of the monument on the draft Shiortino not having, in our opinion, no artistic merit, - wrote in his letter to the chairman of the Joint Committee famed historian, art critic and social activist, Director of the City Museum Nicholas Bilyashivsky and renowned architect and artist Vasily Krichevsky, - is an insult and outrage upon the memory of the poet-artist, we do not want to participate in such a shameful fact, please do not consider us as the members of the Committee. "

However, it got off the ground, and Shiortino received an order for the production of monument in Rome, followed by the transportation it in Kiev. But did not come - soon the First World War, and everything connected with the Ukrainian life, fell under the ban. "Historical justice" was restored by the Bolsheviks in 1919, which, according to Lenin's plan "monumental propaganda" dropped monument to Princess Olga at St. Michael's Square, and in its place established a plaster bust of Shevchenko sculptor Bernard Kratko. However, the bust stood for a brief period and was destroyed or by Denikin or the Polish soldiers during one of the shifts in power in Kiev. And only, as mentioned above, in 1939, on the occasion of 120 aniversary  Shevchenko monument to him was erected in Kiev. Sculptor Matvey Manizer  and architect Eugene Levinson were the authors of it. It is already possible to speak about historical justice without the quotation marks: the monument is installed in the same place where before the revolution, there was a monument to Nicholas I - the worst enemy of any independent thought and chief tormentor and persecutor of Taras Shevchenko.