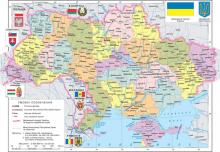 Ukraine is a country of East-Central Europe. It occupies the south-west of the East-European plain, partially the Carpathians, and the Crimean Mountains. Ukraine extends for 893 kilometers from north to south, and for 1316 km from west to east. Ukraine is located in the temperate latitudes, and it has access to the Black Sea and the Sea of Azov. The geopolitical situation of Ukraine influenced greatly its history and current development. Ukraine borders Russia, Belarus, Poland, Slovakia, Hungary, Romania, and Moldova. Its boundaries extend for 6500 km.

Ukraine has moderate continental climate with the exception of sub-tropical climate in the south coast of the Crimean peninsula. The Dnieper River is the largest river in Ukraine (2201 km length in total; 981 km in Ukraine). The Carpathian Mountains or Carpathians stretch for 270 km. The highest peak is Goverla (2061 m). 70 % of the land is occupied by plowing, 17% by forest, 4% - domestic water, 9% - other lands.

Territory of Ukraine occupies 603.7 thousand square km, or 5.7 % of the European territory, or 0,44% of the whole world. The territory of Ukraine is bigger than the territory of France, Spain, Sweden, Germany, and Poland. Ukraine is a transit point for passengers and cargoes from various countries thanks to its geographical location in the heart of Europe and an extensive network of the aircraft, railway, sea, and motor transport.

Ukraine is composed of the Autonomous Republic of Crimea and 24 oblasts: Vinnitsa, Dnipropetrovs’k, Donetsk, Zhytomyr, Transcarpathian, Zaporizhia, Ivano-Frankivsk, Kyiv, Kirovohrad, Luhansk, Lviv, Mykolayiv, Odesa, Poltava, Rivne, Sumy, Ternopil, Kharkiv, Kherson, Khmelnytsk, Cherkassy, Chernivtsi, Chernihiv. The territorial structure of Ukraine is based on the principles of indivisibility and unity of the country, the combination of centralization and decentralization of power, the balance of social and economic development of regions, according to their historical, economic, geographical and demographic features, ethnic and cultural traditions. The head of the state is the President, who is elected by the citizens of Ukraine for five years and no more than twice. The legislative power belongs to the Verkhovna Rada - the Parliament of Ukraine.

Ukraine's largest cities are Kyiv, Zaporizhia, Dnipropetrovsk, Lviv, Odessa. Two cities have the special status, fixed by the Law of Ukraine, - Kyiv and Sevastopil. There are 490 districts, 446 cities, 907 towns and 10196 villages in Ukraine.

Ukraine is a country with the developed scientific and industrial base. For example, Ukraine has 17 of the 22 world’s high technology bases in the aerospace industry.

Ukraine is one of 8 countries which have necessary scientific and technical potential for the creation and production of the up-to-date aircraft equipment. Development of new models of AN-70, AN-140, AN-74, TK-300, AN-38, AN-180 proves this statement. AN- 225 ("Mriya") has beaten 240 world’s records. Ukraine is an industrial and agricultural state. The most developed types of industries are metallurgy, machinery, mining, chemicals, and aircraft industry. Agriculture is focused on producing grain and livestock development. Ukraine has the well-developed network of means of communication. The length of railway, highway and sea routes totals respectively 22300, 116700 and 4500 km.

About 500 settlements of Ukraine have 900-year history; the 4500 Ukrainian villages are more than 300 years old. Historic towns and villages are the national wealth of the Ukrainian people. There are more than 150 thousand monuments and 300 museums relating to culture, history, archeology, city planning, and architecture. The most valuable monuments are those dating back to the times of "Kyiv Rus"(IX -XII cent.). 80% of the monuments of that period are located within the territory of Ukraine. The most famous monuments of Ukraine are Kiev Pechersk Lavra, St.Sophia Cathedral, with nearly 1,000-year history, and the historical center of Lviv. They are enlisted to the World Heritage Site of UNESCO. Ukraine is proud of its 125 theaters, 214 museums, more than 24 000 libraries and 23 000 cultural institutions and club.

Museums and reserves of Ukraine having national status