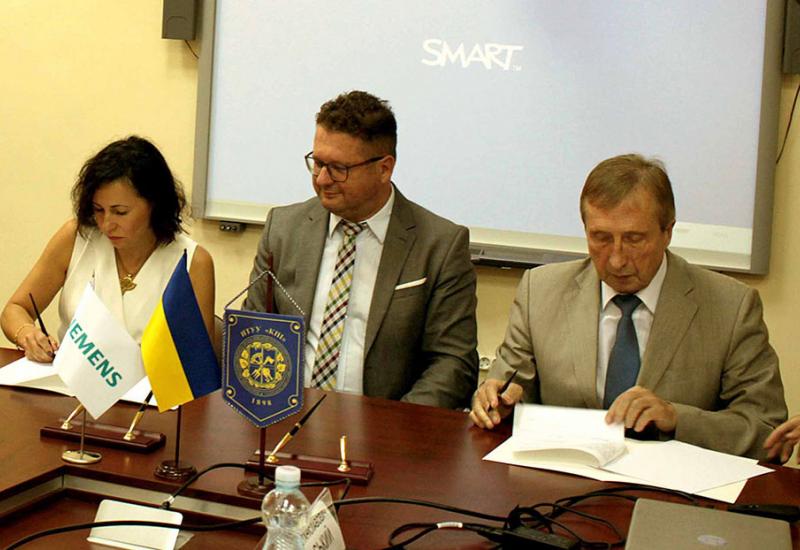 A memorandum of cooperation was signed on July 1 between Igor Sikorsky Kyiv Polytechnic Institute and Siemens Ukraine. On behalf of the university, the document was signed by the Rector, Academician of the National Academy of Sciences of Ukraine Michael Zgurovsky, on behalf of the company - its General Director Maciej Zelinski and Commercial Director Inna Martyniuk.

The event is very important because this document is a real guide on the way to further expanding cooperation between the department of the famous multidisciplinary international concern and the university, which is a leader in Ukrainian higher technical education. This cooperation has a long history. Moreover, the company has been operating in the domestic market for a very, very long time - more than a century and a half.

A little bit of history

In fact, the company, founded by the famous German engineer and scientist Ernst Werner Siemens together with his business partner Johann Halske, started its first large-scale project in the former Russian Empire, including Ukraine, only 6 years after its creation, back in 1853! And in 1855 it opened its technical offices in Kiev and Odessa.

Interestingly, the founder and longtime head of the Department of Electrical Engineering at our university (it was formed in 1901), a prominent domestic scientist-electrician Nikolai Artemyev before being invited to work at the institute held the position of technical director of the Russian branch of the electrical company Siemens and Galske. where he calculated a series of new three-phase induction motors. The knowledge and skills he acquired during this work, he widely used in his scientific and pedagogical activities.

The company's products were used in our country during the Soviet Union, but its business relations with Ukraine were especially intensified at the end of the last - beginning of the present century: in 1997, a subsidiary of Siemens Ukraine was established with 100% foreign capital, and in 2000 a new office of the company was opened in Kyiv.

For almost 10 years, Siemens Ukraine has been fruitfully cooperating with the National Technical University of Ukraine, Igor Sikorsky Kyiv Polytechnic Institute. Moreover, as Maciej Zelinski noted during the discussion of the provisions of the memorandum, today almost every second employee of the company is a graduate of Igor Sikorsky Kyiv Polytechnic Institute.

Memorandum and its provisions

One of the main points of the memorandum is the agreement on the establishment of the company's Educational and Research Centre on the basis of the Faculty of Electrical Engineering and Automation, in fact - a specialized laboratory, which the company will provide with modern equipment. It will become one of the structural units of the faculty and will be used for teaching and research work of students, graduate students, researchers and teachers of Igor Sikorsky Kyiv Polytechnic Institute. And not only FEA, but also all educational and scientific divisions of the energy direction. Moreover, it will be possible to conduct trainings, seminars, courses, in particular for energy specialists with the possible involvement of representatives of Siemens Ukraine. In addition, the memorandum stipulates that the university will develop separate training modules in the framework of educational programs or certificate programs, which will be read using the equipment and software installed in the Center-Laboratory. As for the equipment itself, the dean of the Faculty of Electrical Engineering and Automation Oleksandr Yandulskyi said the best about it after the signing ceremony: "The equipment is state-of-the-art, just from factories, not what was in use. Well, the "Simens" brand is even unnecessary to discuss. “

Thus, the document envisages, first of all, the multifaceted development of an extremely important direction for both the university and the company - education. Maciej Zelinski spoke about some projects, including in the fields of automation, electrification, automation and digitalization, which his company is currently developing in Ukraine, and that it is planned to train specialists in Igor Sikorsky Kyiv Polytechnic Institute for their implementation. Therefore, the company transfers equipment to the university so that, according to him, "students can learn not only the technologies of today, but also the technologies of the future.” But at the same time he stressed the need for a comprehensive approach to training: "Technology is one thing, but its application and taking into account all the norms of safety standards, environmental requirements and so on, as well as the interests of all stakeholders, including society - is now also necessary.”

It seems logical that the next step in the development of cooperation will be the introduction of a system of dual education of our students on the basis of the company. "It should be said that this is just the beginning of our cooperation with Siemens Ukraine in an expanded format. The next stage is the joint training of specialists in dual education projects, the employment of our graduates in high-tech enterprises, etc., - commented on the signed document, Vice-Rector for Academic Affairs Anatolii Melnychenko. "Therefore, this cooperation involves teaching our students the technologies that are advanced in energy, digital solutions and other areas.”

It is planned that the Training and Research Centre Siemens-Ukraine on the basis of FEA will start working this year.

The agreement signed today outlines all points of further cooperation.

🎥 Watch the video to learn more about the meeting.