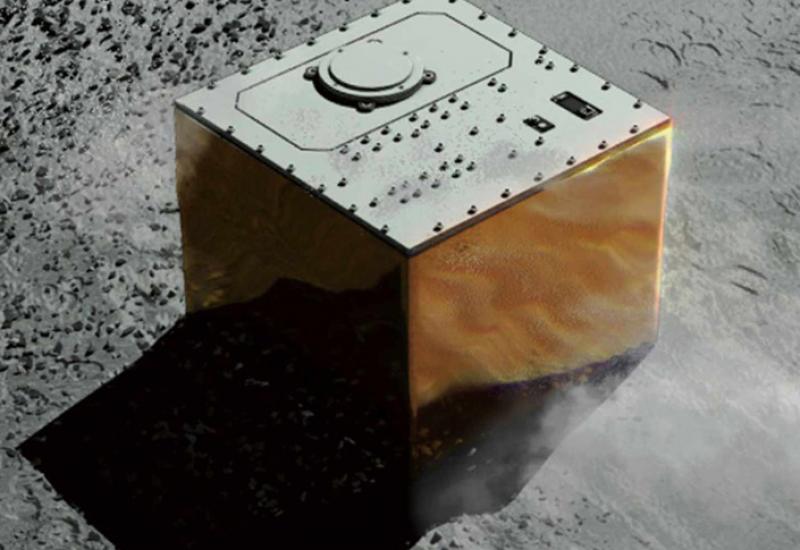 Igor Sikorsky Kyiv Polytechnic Institute got a letter from the director of Institute of space systems of German Aerospace Center (DLR) Andreas Rittveher of such content:

I’m writing to tell You the planetoidal lander – MASCOT (Mobile Asteroid Surface Scout) successfully landed on the asteroid Ryugu near the Earth on October, 2018 and after 17 hours of staying at the asteroid’s surface finished its scientific agenda.

Igor Sikorsky Kyiv Polytechnic Institute’s scientists of Faculty of Heat and Power Engineering took part in development of temperature-control system of the lander. Effective heat conductance devices with unique qualities were engineered, made and tested by scientists in required conditions. It let to work successfully during MASCOT touchdown on the asteroid’s land after 3,5 years of spice travelling.

We want to show our appreciation and say thanks to scientists of Faculty of Heat and Power Engineering of Igor Sikorsky Kyiv Polytechnic Institute (research advisor V.Kravets) for successful implementation of the project into action. We appreciate their efforts to realize heat pipes samples at the appropriate times. The pipes enabled successful conveyance of asteroid planting mechanism MASCOT that was lit up on 3rd December, 2014.

We are satisfied with scientific results of our cooperation with scientists of Igor Sikorsky Kyiv Polytechnic Institute: four mutual grant works that were published in international publications, two mutual reports at internationally acclaimed conferences – it’s a great contribution into international academic community.

We hope that present and future relationship will help Ukraine to integrate into European Space community and will encourage human interface.

Director of Institute of space systems

For reference: The MASCOT module worked as a part of space mission that was started on 3th December, 2014. It was opened with start of Japanese probe «Hayabusa-2» from Tanegashima spaceport. Its aim was to explore a C-type asteroid including its ground conveyance.  The Asteroid Ryugu was chosen as an object, its diameter is approximately 0.92 km, perihelia orbit is near the Earth’s orbit and touches the orbit of the Mars in aphelion. The way from the probe to the object of researches was more than 3 milliards km. The MASCOT module was developed by engineers of German Aerospace Center and French national aerospace research center with the participation of Igor Sikorsky Kyiv Polytechnic Institute’s experts successfully landed on the asteroid on 3th October.  The module has a size of 30 x 30 x 20 centimeters and weighs 9.6 kg. During coming down at a height 51 meters MASCOT made some photos. During its work on the space object the module carried out successfully the program of researches by dint of spectrometer, magnetometer, radiometer, camera and conveyed it on the orbiter. The mission will be completed and the explorer «Hayabusa-2» will return in 2020.

Our correspondent had an interview with Doctor of Engineering Science, professor of TEF Volodymyr Yuriyovych Kravets – the head of the group of TEF scientists that developed and made heat pipes for the space vehicle.

- First of all, tell us what the heat pipes are.

- The heat pipes are powerful heat-conducting appliance. Its construction consists of iron (usually copper) tube. A layer of porous material is on the internal surface and center body section is empty. Pore spaces of the material filled with a liquid you can choose depending on diapason of device’s working temperature. The way of heat pipe proceeding is really interesting. Heat transfer fluid boils on the warm end of the pipe and steam moves around the cold end, here the steam condensates and turns into liquid. With the help of capillary strength the liquid moves through the filler pour space from the cold end to the warm one. Inside such a device boiling-off processes and condensation are used. So, current of heat through the heat pipe is higher more than 100 times than current through the copper bar of the same crossover and lengths.

The heat pipes are widely used in cooling installations of electronic equipment. They transfer heat from hardware piece to external heaters. They can be seen in any laptop. They are also used in refrigerating systems of space vehicles hardware.

- Why German Institute has resorted exactly to you? If heat pipes are so widely used, can it be true Germans don’t know how to produce them?

- Of course, they do, but not all. The matter of fact it was necessary to develop the heat pipe not only of appropriate sizes, configuration and bulk but also with accessory heat transfer resistance. During the period of time while the interplanetary station had to fly to the asteroid (three and a half years), the heat pipes must not transfer the heat. Near the Earth’s orbit in interplanetary space everything gets cool to 150-200 degrees below zero. Under such conditions the space station hardware can go wrong. So during three and a half of years the temperature-control system maintains the temperature of equipment at the level of 0 Celsius degrees. Of course, it doesn’t need to reject heat at that time. During researches of the asteroid the electronic equipment starts to heat, the heat pipes have to reject heat flow on the radiator in order to not let the equipment to heat above 40 Celsius degrees.

Firstly, the German Institute ordered heat pipes projection and production in two institutes in Belgium and Spain. They were working a whole year, but couldn’t make appropriate pipes. It was really acute situation. In early summer 2014 a former employee of our faculty, graduate of Igor Sikorsky Kyiv Polytechnic Institute, Doctor of Engineering Science Volodymyr Mykhaylovych Baturkin offered me to make such a pipes.

- How did you make such a thing other people failed to do?

- It’s important to notice we didn’t get what we wanted at one stroke. It was necessary to reject heat current of a 30 W power. For some time we could get only 5 W. then we decided to use platelet structure based on piece of copper wire.  Lay of such a pieces roast in inert atmosphere. Meanwhile a metal-fiber material is forming. It is putted in the tube and burned to its upside. The platelet structure is filled with methanol under vacuum and the tube begins to fire. After that flanges were soldered to it and were given an appropriate form bending in rim. Then it was overlaid with protective nickel covering. After that its characteristics were established and were tested on machine vibration. The experiments were carrying out during 3 summer months and getting necessary characteristics needed yet two months. A score of pipes were made before we get what we wished. The pipes were passed to customers in Bremen in October. They tested them and fixed it on the machinery.  The start from the Japanese spaceport came true in December.

- There’s school of heat pipes at our department. Doctor of Engineering Science, professor Mykhaylo Hryhorovych Semena formed it in the 1980s. Nearly 20 of his postgraduates defended master’s dissertation. Under his auspices was started development of heat pipes with metal-fiber pore structure in USSR. Before porous layer of heat pipes was made of powder. Today most of heat pipes have the same construction. What is more, interpartical porosity is less than 60% and metal-fiber pore material can have porosity 90 or even 98%. Thanks to that the liquid moves much faster through that material and these pipes transfer the heat more effectively.

- What are you working upon right now?

- The group of heat pipes does fundamental and applied researches. From the first direction we investigate processes in evaporative and condense systems. Recently I published a monography about that. We work with native and foreign organizations and do researches in closed evaporator-condensing systems. Also we design effective refrigeration systems for it based on heat pipes for electronic technology.

We designed heat pipes for cooling hermetic computers that work along with watching cameras. We have got some patents on inventions and useful models. Also we design thermosiphons (heat pipes without platelet structure). They can be used in cooling systems of spent nuclear fuel.

Generally, this sort of technologies is really future-oriented and achievements of heat pipes school prove we can carry out the hardest tasks at a high level.