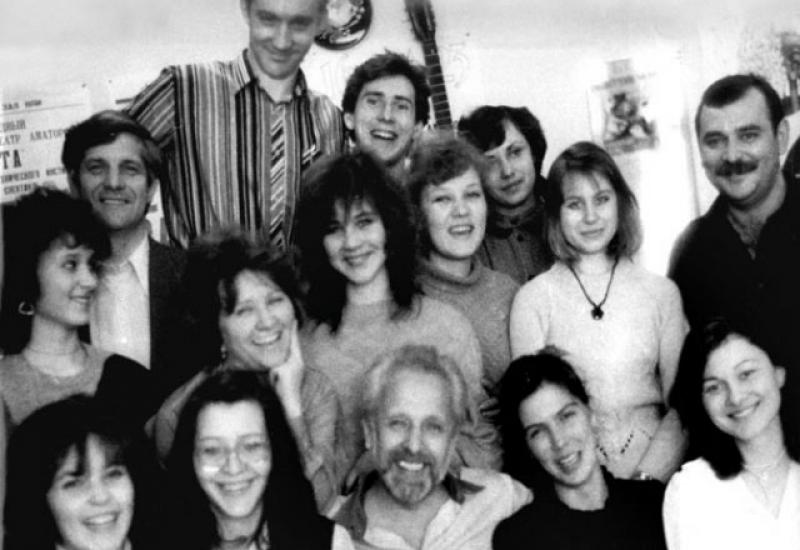 ETA is 50 years! On this occasion I , Associate Professor of Institute of Mechanical Engineering, Vitaliy Ivashchenko, at least briefly tell you about the hero of the day, as I organized it, wrote all the comedy drama, put you with performances and played.

April 1, 1959, as a fourth-year student of mechanical faculty, I gathered my friends, which appeared on the stage as emcee institute of jazz, the best of the amateur teams of Kyiv and we decided already matured: wish, humor, skill - creating theater !

In those days, almost all student theater called STEM - the student’s theaters variety miniatures. We did not want anonymity and standard, we wanted the name to be was symbolic. So we called ETA.

Variety - so democratic, understandable everywhere and all relevant, mobile, interesting and fun. Theater - the study of the life of the human spirit. Fans - those who love dealing with a matter that is not their profession. A Greek letter "eta" technique indicate efficiency. This symbol - the goal and the dream theater to help  people and society, to improve their efficiency, so that all life was interesting and happier.

It's been 60 years, the famous "Khrushchev thaw." Students stretched the truth and emancipation, both critical and optimistic outlook on life. Was the public of the need for a theater.

The premiere of the first performance, "guilty without spring" was held on May 5, 1959. Drama performances I wrote with George Zabolotnyuk (Faculty of Mining) and Elijah Zborowski (with the mechanical department).

By genre "Without spring guilty" - a classic pop performance review, in which the independent comedy miniatures were strung on a light lyrical story: medical student falls in love with a student of polytechnic and then searched for her in the KPI, falling into various comedic situations.

Positive feedback about the most popular prime minister then printed Kyiv newspaper "Evening Kyiv". The performance was such a success that played it several times. At that time it was rare. Later it was the practice of our theater for plays butt attitude as an art, that is a lot of work, a lot of play and improving play and not doing one-time rehearsal to appear at festivals or competitions.

Fragments our performance showed Ukrainian television. It was almost unbelievable, because in those days, humor and television were almost incompatible.

Actors have begun to recognize the streets, teachers greeted them. Some polls even without test set! Came glory. And half star actors contracted min at Rob. I had to resort to "surgery", was sharp conversation "Purity". There were tears. Remained only half of the team, but the one for which the "Case of the theater - above all!" This - the first motto of ETA. Since we care about to come to the team are friendly, hardworking, intelligent students.

The following season, the theater filled with new artists: it Jory Walter, Valens and to Bilozub (Rozenko) Gal Struchenko, Victor Kravchenko, Vladimir Shevchenko, Vladimir Kyianytsia and others. In 1962 we were first invited to the festival of student theaters in the city of Kaunas and first became winners. On the way back from the success they gave performances in the Leningrad Institute of Fine Mechanics and Optics.

In 1963, writing for the first time he put a new play "Our museum", on stage at different areas were three large curtained frame. Lead - a man from the future - a guide museum opened curtain pattern by which the fixed positions of the actors stood in a certain way. They "came to life", performed comedy thumbnail, then sank actors, and the guide went on to another picture.

In the same season emerged KVN popular today. ETA was a member of the first Ukrainian TV KVN we have prepared homework. It was a piece of student comic opera "Session - my love." For the six-point scale jury headed by renowned composer at the time Oscar Sandler assesses our performance in 12 points - for originality and skill. The game goes on and suddenly - stop! The jury was discussing something. Since transmission was live (and not, as now, everything is recorded and then edited), it is during our broadcast KVN speech was cut short and commissioning of news and TV viewers have not seen our performance. Jury offers cq restore back to the NOC (ie, remove these 12 points) and try our "opera" specifically for viewers as just decoration KVN, evaluate it and then play as play. So they did.

We closed this theater season in Odessa, in the arms of the most talented worldwide audience with a sense of humor. The performance was played twice. Assembly Hall of the Odessa Polytechnic Institute was overcrowded, stood on the windowsill. For open windows were students who did not have enough space in the room. The lucky ones on windowsills they told them he is the funniest prizes and we heard sincere laughter from the street. At the end of the hall was a table, which was also full of students. In the middle of the performance table broke down, broke and slammed to the floor. Laughter was!

In season 1963-64 years, we played "Evolution student" - show how and why the student is 5 years varies so as not to know. Over fragments of the play "The first lecture," "Love the courses' students of different generations laughing, laugh today. With this performance ETA is the winner of the competition Ukrainian art groups dedicated to the 150th anniversary of Taras Shevchenko.

Almost all of our productions have been seen at festivals, contests and surveys, and most importantly, played dozens of times, and not only to the student audience, but also in the factory class to bang in forolhospah in schools (vocational work fine!), A scientific research institutes, and played in the Parliament and in Lukyanovka prison. Total not listed.

In 1974 we first went abroad - to the Polish People's Republic.

Played Polish. The audience laughed to tears, and after the performance of Polish radio reporter asked, according to which method we are so well studied Polish. In the same year a trip to Bulgaria in the European capital city of Gabrovo humor. Once again we went to Gabrovo (in 1976), it thence students successfully played our performances that are recorded on the tape during our first tour.

Humor - a derivative of kindness and intelligence. In the mood - wise benevolence that comes from the awareness of finitude of human life, the futility of vanity and ambition. He - the perfect way communication, communication between people. He teaches us to be around with higher non-con is the destiny of man over whom should laugh.

The heyday of the theater, all-union and foreign tour 70 years associated with the name of the best all-time club director Nina Alexandrovna Kryachko KPI.

In 1985, celebrated the 40th anniversary of victory in World War II. We asked poetic composition "Whatever It would be something not with me, remember!": this play was created  using Nuremberg documents, poems and songs of war. The performance took an hour.. Although that year radio, newspapers, magazines, television, cinema and the gov just dug at war, our performance went so sincere and powerful that the audience were crying, and finally summed performances and long applause.

In the same season for the first time I put not your drama, tragicomedy about the war Andrei Makayonka "Tribunal". For the first time our actors have shown that not only can play comedy. The play was awarded the Gold Medal at the All-Union Festival theatrical art.

1986. Spring Chernobyl tragedy. As human nature manifests itself in extreme situations, the essence and spirit of ETA apparent that he was the first Ensembles Ukraine, which is already a month after the explosion at Chernobyl on their own initiative, without charge (municipal unions only gave the bus, but no to guide us went) themselves went to the area and spoke to the liquidators.

Almost all the actors did not tell their parents where they are going, because many parents forbade to go, and could fall as important - for the mind and conscience - performances. Played in many military units. Often liquidators sat in respirators and we played without. Despite the tension (known as liquidators because that's what) we did them amused, Ro weighed helped for a while to forget the tragic situation.

1987. Getting restructuring. Ideological pressure falls Committee. Moscow intellectuals seeking the right to create theater studios. And what we are worse? I, along with the heads of four theaters in preparing the necessary documents. Decision of the Ministry of Culture of Ukraine and Kyiv city executive ETA give the status of state theater studio five years - the financial collapse in Ukraine in 1992 - twice a week we collected a full house (1700 seats) and played their performances.

Opened professional theater season comedy "Neighbors, come!", I wrote, the lows and the famous cinematographer, very nice man Suren Shahbazyan, which took place in the life story that we took a dramatic turn. First was a semi sled screenplay, but the film failed to take off. So I made him play, we are December ly and successfully dozens of times.

Tickets for our performances up cost 1 UAH. Especially for younger students and Mr. I wrote and staged the comedy "Barabashka" which played not only our children - Helen and Anna Ivashchenko Cousin, but the dog - poodle Dolly - with excellent acting skills. A play came to the end but kids sat and did not want to go home!

Unfortunately, many students are now more oriented towards making money rather than art as the only way of spiritual development of the individual, therefore less willing and capable newcomers come to the theater. They are: Alexander Alyoshin, Gal Lobachev, Dima Kozyrev, Oleshkevych Anna, Sasha Babich, Lena Raychenko, Dasha Baranova, Valery Heart.

Life of theater is long, but article is short. The blessing is the Internet. Who is interested, visit: http://eta.kpi.ua . There is a history of ETA, photographs, dozens of articles in the press, performances and phonograms conference audience, audience feedback and more. As it so happened that I gave a fifteen collections of poems with them can also be found at: http://www.viiv.co.ua .