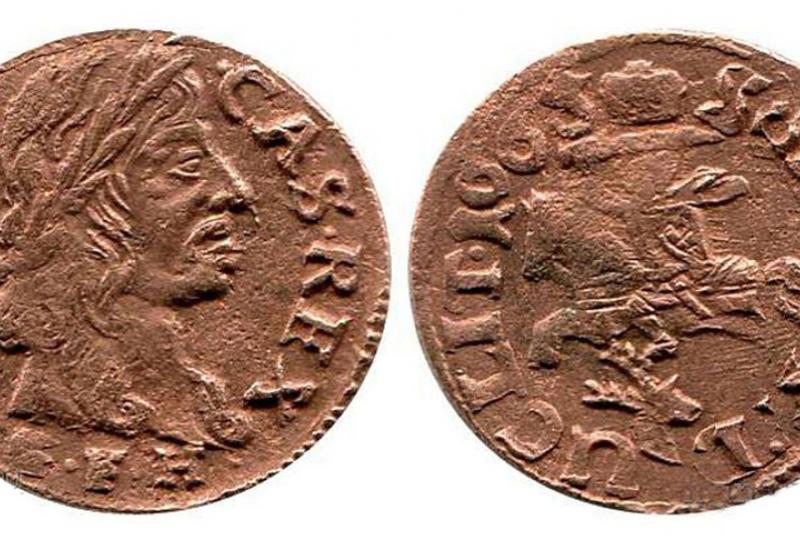 The middle of the 17th century for The Polish-Lithuanian Commonwealth was a very difficult period. Despite the glory of the royal court, the financial affairs of the state were far from brilliant. The national liberation revolution under the leadership of Bogdan Khmelnytsky in Ukraine, the war with the Moscow kingdom, the war with Sweden, the Polish-Turkish wars, all sorts of rhetoric, that is, the official gesture speeches in defense of their rights and freedoms, the great and small disturbances of  The Polish-Lithuanian Commonwealth, demanded funds, funds and funds . Of course, they are not themselves, but an army, without which the further existence of the state was impossible. He needed to feed, dress, arm and so on. And to pay the proper salary, because the army was hired and all - from ordinary zhonnezhy to colonel-regemers, demanded money. Delayed payouts threatened rebellion. In 1657, the patience of the military broke: they created a confederation in order to take power.

The output did not seem to have happened. And yet, he found the quick mind with Burattino. The reform he has proposed made his name widely known in  The Polish-Lithuanian Commonwealth. Even more - he wrote in the history of the monetary circulation of several countries, whose territory then belonged to the territories of this state, and their neighbors.

Burattino`s way of  patching the holes in the treasury was extremely simple: he recommended for Jan II Kazimierz move away from the silver standard of the mintage coin and make copper coins with a rate much lower than the cost of their metal. At the same time, the rate had to be equal to the rate of circulation of previously minted white copper coins (made of an alloy of at least 40% silver), that is, it was determined by the state and amounted to one third of the silver money. According to Burattino`s new coins should be made massively so that they can cover all the needs of the state as a means of payment. The question was referred to the Sejm, and on March 22, 1659, he approved the decision "On Issuing a Coin." The decree also determined that copper solids (called them still shelled) would be minted for a sum of one million zlotys for the Crown (i.e. for the Polish lands), and another one million for the Grand Duchy of Lithuania. Given that the value of one reference currency, the zloty, at the proposed official rate should be equal to 90 solid-shelles, the total number of coins should have been extremely large. Thus, not only existing coin yards in Krakow and other cities were involved in the production of new money, but also new ones were founded.

In the summer of the same year, the Seym issued another "ordination", which confirmed the course of the copper leakage and determined that it should strike "on the foot" of 150 coins from one "Krakow's hryvnia" of copper, weighed in 201. That is, the weight of such a coin was set at 1,346 grams - almost twice less than the copper salt in 1650, but with a greater than compulsory rate: 3 solids equaled 1 silver money, and 30 such money, that is, 90 solids - 1 zloty. The real value of the new coin was only 15% of the nominal! Thus, the shelves were inadequate credit money.

On July 2, 1659, Burattino signed an agreement with the government, which obliged to release all 180 million solids. The retreat turned out to be very beneficial for all - the king, the most Burattino and even the minters. All but the population of the Commonwealth.

The King benefited from the fact that every one thousand "Boratynka" (a name so popular in the people soon received new money) due to the above-established course and inferiority of the coin, allowed the state actually to receive goods and services for about 80-120, and sometimes more silver money . New solids-shelles went to pay  for Polish soldiers, food and weapons for the troops, they paid domestic debts and compensations for the burnt-up crops and destroyed during the war lordship          estate.

Burattino`s pro fi t was determined by the fact that, out of every 300 shells that were fired from two Krakow hryvnia of copper, he and the wages of the workers of the mints, according to the agreement, went 84 coins.

Well, the     minter contrived to beat not one hundred and fifty shelves from the same Krakow hryvnia, and some more - who in how many in the absence of constant control was capable. So, besides the pay for work, they had some more "pockets".

The winner of this holiday was the enrichment of the entire population of the Commonwealth. And the loan that lay on his shoulder was irreversible.

At first, copper solids were fired only in Poland, and from 1664 - and in several cities of the Grand Duchy of Lithuania. In total, over seven years of emissions, more than a billion copper solids were produced! And this is only official calculations, because the new slugs are also interested in "riveted" -finished. Given the real, rather than the exchange rate, "Boratynka" they were not even restrained by the coinage of lesser weight - they simply complemented the circulation of their own products, which were not worse than the originals.

Of course, the market has responded to such volumes of new money by inflation. Polish gentlemans in a few years significantly depreciated, and in 1666, the Diet decided to stop their minting. And, at the same time, draw Burattino for destroying the system of public finances in court. However, it was possible not only to prove his innocence but also to obtain from the execution of his compensation in accordance with contracts with the state in the amount of one and a half million zloty (!) Which he allegedly "did not finish" on his and his lenders' benefit. Therefore, in order to satisfy the "fair", as written in the relevant decree, the claims of Burattino, he was left for a further two years by the tenant of the Krakow Mint. Now, though, there were not rambled there, but six-groszes, orts and double duckats …

Probably from those times in Ukraine, where "Borattinis" also went, about something extremely unworthy and poorly said "worth virtually zilch ..." And the shelves those, despite their ancient origin, are not much appreciated among modern collectors - they have already found and found many of them. in the territories of the countries that once belonged to The Polish-Lithuanian Commonwealth - Poland, Lithuania, Belarus, Right-bank Ukraine. Moreover, they met in the left bank, then in the Russian part of Ukraine, whose population in the second half of the sixteenth century was widely used by the West European, mostly the Polish coin.

However, for the sake of justice, it should be noted that the solid funds of the Burattino as credit money helped  The Polish-Lithuanian Commonwealth in a rather difficult time for the state to overcome serious problems, and its "Boratynka" as small money was used in the domestic market for years to come.