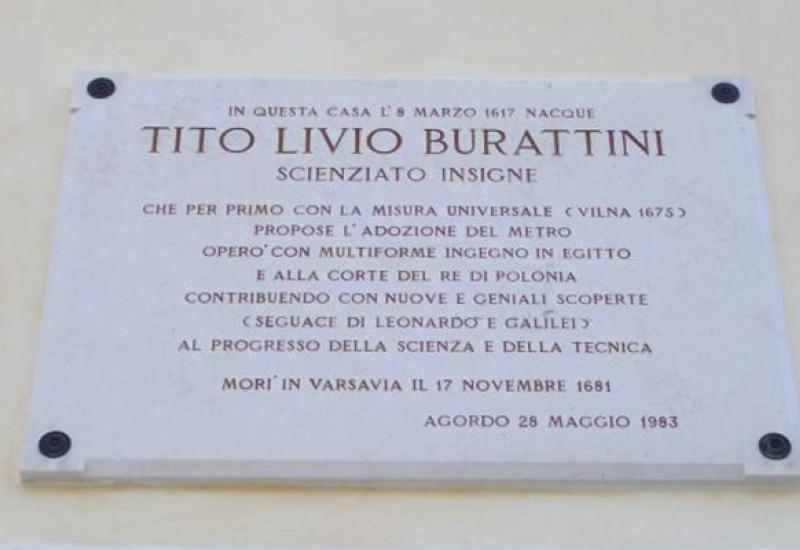 During his financial epic Burattino finally linked his life with the Polish-Lithuanian Commonwealth. In 1658 he received indiginate (that is, the right to enjoy the same privileges as the native Polish nobles), and in 1660 he married the hereditary nobleman, the daughter of the Dartovsky governor Zygmunt Opatsky Teresa Bronislav, who was younger than him in twenty three years. The family was born six children - two daughters and four sons. Their names were completely Polish: Ludwika Isabella, Alexander, Franciszek, Kazimierz Karol, Sigmund and Barbara. Moreover, even their surname was written a little differently than their father: they became Borattino. For the growing family, Tito Livio at the time of his highest business success acquired the village of Yelonek near Warsaw. And next, in 1668, he, as the faithful supporter of Jan Kazimierz and the patriot of the new Motherland, built a pontoon bridge through the Vistula for the royal army, which opposed the participants of the Rocosh (the uprising in defense of the nobility's liberties), Jerzy Sebastian Lubomirski.

The military achievements and skills of Burattino`s did not go unnoticed, and during the Polish-Turkish War of 1672-1673 the new King Mikhal-Korybut Vyshnevetsky appointed him commandant of Warsaw. At the same time, in the early seventies of the seventeenth century, he worked on the development of hydraulic equipment, which could be used in reclamation works. Under his design, machine-windmills were erected, installed in the park of the Uyazhiv palace in Warsaw and in the estates of other authorities.

Last but perhaps the most famous work of Tito Livio Burattino was the treatise "Misura universale" ("Universal measure"). It was the result of thirty years of work, as well as communication and correspondence with colleagues in Poland and abroad. This book first saw the world in Vilna in 1675. The author proposed a new universal measurement system, laying the foundations for not a directive of one or another crowned person, but a kind of natural phenomenon. Moreover, this system was supposed to be decimal and suppressed the then twelve year-olds, which would simplify calculations at once.

For the fundamental unit, Burattino decided to take the length of a second pendulum, that is, a pendulum whose half-life of oscillation is one second. His idea was based on studies of the pendulum conducted by Galileo Galilei, which Tito Livio Buratetini has repeatedly referred to in his treatise, and later - Christian Huygens. Interestingly, the length of the meter proposed by Burattino differs from the meter defined in the SI system by only six millimeters.

The scientist called the new unit a "universal measure" that was a literal translation of the Greek "metron kaqolik" (metron kafolik, or metron kosolik), since the Greek "kafoliki" (kaqolikh) is translated into Ukrainian as "universal", "general". The remaining measures - planes, volumes and weights - were derived from the meter. The use of the Greek was a tribute to the tradition: in mathematics, quite a lot of terms borrowed from this language (diagonal, parallelogram, axiom, etc.), and indeed the word "mathematics" comes from the ancient Greek word "maqhma" (lesson, course). The work was written in Italian, but in his text, Tito Livio Burattino, in his native language, translated the term only in the title - "Misura universale". In the text, the same name of the unit in the best mathematical traditions remained in Greek, but, of course, recorded using the Italian alphabet - Metro Cattolico. By the way, the word "Cattolico" reduces some of the authors on the quest for a particular religious idea that the author decided to capture in the term. Of course, Burattino, as a man of his time, and still an Italian, was a zealous Catholic, but it seems that the primary in the new concept was nevertheless the unity of the new dimension of the physical world. However, in determining the length of his "own" meter, he did not take into account its dependence on geographical latitude and ambient temperature, however, this does not diminish the value of its work. Especially if you remember that it was the first printed work on metrology.

For the sake of justice, it should be noted that the first use of the length of a second pendulum as a universal measure of the decimal system of measures was proposed by English religious figure, naturalist and philosopher John Wilkins in his treatise "A Study of True Symbolism and Philosophical Language." This work was published seven years before the book Burattino. However, as can be seen even from the title, it was devoted to completely different problems, and the question of a unified measurement system, the author touched only briefly. So, it was Tito Livio who for the first time created a rather subtle ground on which this system was to be built. And it belongs to him an idea to call it the base meter meter.

However, the idea of ​​introducing into practice a new metric system of measures and scales was implemented only one hundred and thirty years later. The pioneer in this case was France at the time of Napoleon Bonaparte. The basis of it, indeed, became the meter, but its length was determined not as the length of the pendulum, but as one ten millionth part of one quarter of the meridional circle of the Earth, which was just equal to the distance between Dunkirk and Barcelona. However, this is a completely different story.

How lived Tito Livio Burattino in the last few years of his life is not entirely clear. There are only written evidence that he died in terrible poverty, and various authors even called different cities where it happened - whether it was in Vilna, whether in Warsaw or in Cracow. We only know that he died on November 17, 1681. Why and how he, who was close to the kings, held prominent public positions and implemented large-scale state projects, lost everything - unknown ...

As for Burattino`s scientific heritage, it is not forgotten. Moreover, his treatise, "Misura universale", more than two hundred years after his death, was reprinted in Cracow with a delusion of prefixes and original authoring illustrations. Scientists from different countries, working in very different fields - from Egyptology, Numismatics and Metrology to aircraft engineering, recall from time to time about Burattino and the individual pages of his versatile activities. All this reminds passersby and the 1983 memorial plaque, which adorns its home in the central square of Agrodo, is opened.