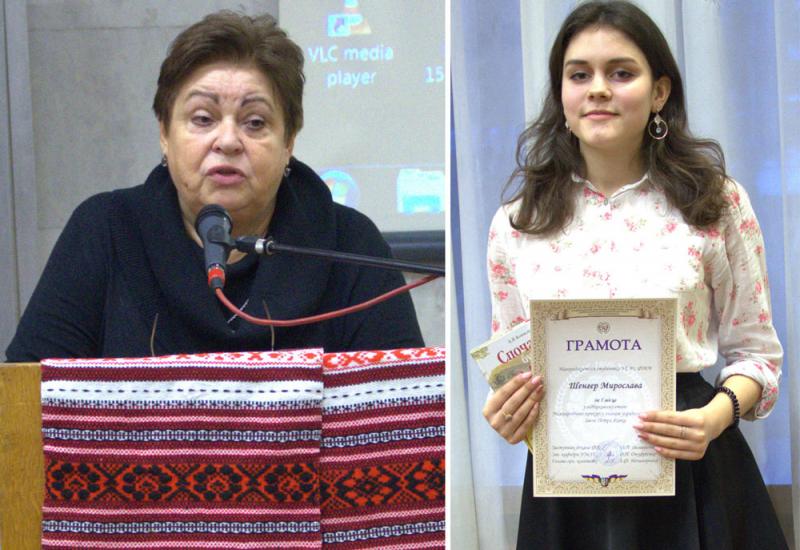 O.Onufriyenko opened the meeting. She marked the symbolism of holding the measure exactly on the Day of Dignity in Ukraine - day that changed country`s history. She paid attention to the importance of studing the Ukrainian culture and language, that identify nation, do it worthy and independent.

M.Volkova (the MSc of the National musical academy of Ukraine ) appealed to the audience and performed several Ukrainian songs.

The rewarding of winners of the International literary competition of student and International competition of connoisseurs of Ukraine named after P.Yatsyk became a great tradition in the conference. A.Tsybulsky , K.Bilachenko, N.Kasyanchuck, D.Tabunschyk. Y.Kovtun, M.Shenger, S.Potapenko, D.Parchevska, A.Korocheva received the awards. These students will continue their participating in the municipal stage.

M.Shenger was the most active in all measures. It was her already not the first victory: repeatedly student occupied prize places on district competitions in native Poltava, was the "bronze" prizewinner of olympiad from Ukrainian in Bila Tserkva and the third place on the competition of the named afterTaras Shevchenko. "Language is a magic song that accompanies me from childhood, it smells as the rains in May,  apples in our garden; it is memory about little motherland, about mother that gave me all knowledge and abilities". And she was dreaming to study in Igor Sikorsky Kyiv Polytechnic Institute, and her dream came true.

The performances of its participants continued the work of conference. Everyone listened  the lecture by Т.Sheptytska. A theme of her lecture is the tragic page in Ukrainian history, known under the name "Large terror". This was the time, when Ukraine lost thousands of lives, among them were known figures - representatives of that time intelligentsia : writer M.Semenko, musician V.Lypkivsky, artist M.Ivasyk  and others.

Among speakers on the plenary meeting were students of the National university of bioresources of Ukraine :S.Ischyk and V.Filippenkova. They came forward with scientific lecture"The concept of shame and its representativein Ukrainian linguoculture", E.Lynnyk and A.Korolyck  - "Scientific communication as the model of mutual understanding and collaboration in scientific environment". Other participents were: A.Verblyd "Functioning of Ukrainian language in facilities of mass communication", Y.Bondarchuck "Cross-cultural variations of politeness" and A.Babych "Dialect as display of language іindividualism.

The participants had the opportunity to present their works in sections "Culture of Ukrainian nation: history and modernity"; "Ukrainian ethnocultural and mythology"; "Modern measuring of Ukrainian verbal space"; "Ukrainian and world writing: from a remoteness to present time" and the "Ukrainian culture and cross-cultural communication".