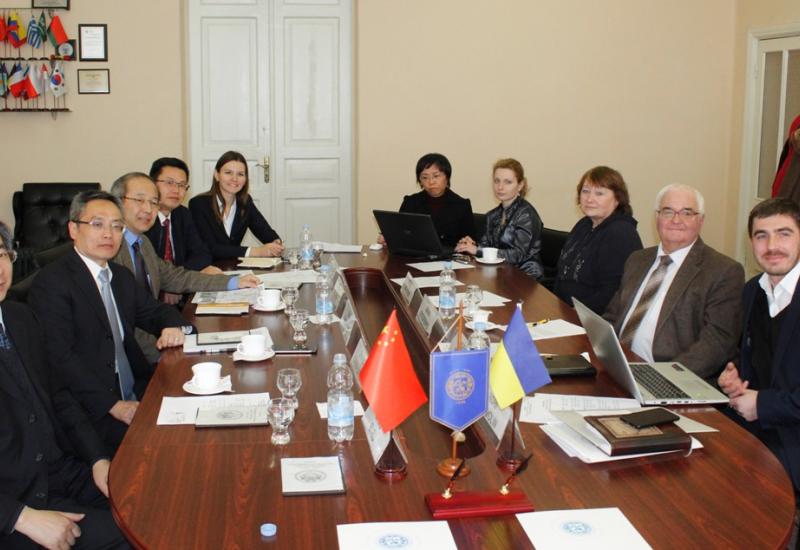 Igor Sikorsky KPI was visited by a delegation from the University of Guangzhou (People's Republic of China) led by Vice President of the University Professor Guo Sin-peng.

It also included the Director of the Institute of Systems Rheology, Professor Yuan Xu-Feng, Dean of the Faculty of Mechanical and Electrical Engineering, Professor Zhang Chung-liean, deputy dean of the School of Economics and Statistics, Professor Liu Han-chang and director of the Department of International Affairs, Lyang Bi-rue.

During two days, 22 and 23 March, representatives of the University of Gouangzhou met with the leadership and staff of the Department of International Cooperation and the Department of Educational Work of the Igor Sikorsky KPI, Mechanical Engineering and Physical-Technical Institutes, Instrument-making, Chemical Technology Departments, Faculty of Computer Science and Computer Engineering and Management and Marketing, as well as the Center for International Education. In addition, guests attended a number of university laboratories. The participants of the meeting discussed possible forms and directions of cooperation. But the most important was, of course, the issue of the expansion of cooperation within the framework of the project of establishing a joint international university in Guangzhou.

The agreements reached with their Chinese counterparts are fixed in the Minutes of Meeting. It envisages that in the near future a draft framework agreement on the establishment of a joint international higher education institution will be prepared. In the shortest time the parties also have to prepare the assets necessary for the opening of such a high degree of documentation. It will be created on the basis of the University of Guangzhou, a teaching staff of the Igor Sikorsky KPI will be mobile. During the preparatory period, both universities will exchange master's programs in Instrumentation, Materials Science, Physics of Metals, Chemical Technology, Computer Science, Welding, Management and Marketing, etc. The launch of joint research projects will give preference to those who, from the point of view of KPI, will have the greatest investment attractiveness. Importantly, apart from the fact that the creation of a joint international higher education institution will not be an exclusive form of cooperation: both universities plan to carry out extensive educational cooperation in all possible forms.

From the Ukrainian side, the protocol was signed by the vice-rector of the Igor Sikorsky KPI on International Cooperation Corresponding Member of the National Academy of Sciences of Ukraine Serhiy Sidorenko, from Chinese - Vice President of the University of Guangzhou Professor Guo Sin-peng.