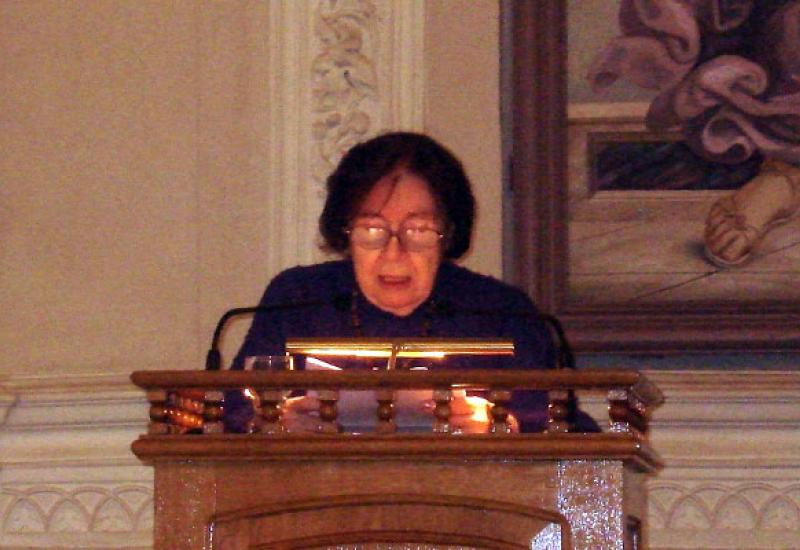 Seminar, devoted to the work of the outstanding Brazilian writer Clarice Lispector, was held on October 23 in the KPI. Attention to this figure is due to two reasons: firstly, the birthplace of Clarice Lispector was Ukraine, and secondly, despite the popularity of its products in Latin America and in the world, her name is still mostly unknown in our country.
So Brazilian writer of Ukrainian-Jewish descent Clarice Lispector (first name - Haya Pinkasivna Lispector) was born December 10, 1920 in the town of Chechelnik, through which her parents had fled from the pogroms of the Civil War. In 1921, her family emigrated to Brazil and settled in the city Risifi (state Pirnambuko), where she spent her childhood. In 1935 the family moved to Rio de Janeiro, where four years later, the future writer was admitted to the University to study jurisprudence. But a year later, she began working as an editor of the National Information Agency and in 1942 became editor of "The Night» (A Noite), which has published several of her stories. Soon she married a young diplomat Mauri Guzhelya Valenti, with whom in 1944 she left Brasilia for long sixteen years. Together with her family she lived in Italy, Switzerland, Turkey, the United Kingdom and the United States. After her divorce in 1960 she returned to Rio de Janeiro and in addition to writing again become actively engaged in journalism. She died in 1977 the day before her 57th birthday. She is the author of numerous novels, short stories and novels, the first of which - "Along with a wild heart," was published when she was 19 years old. Her work includes eight novels, eight collections of short stories, literary articles, translated into Portuguese novel by Oscar Wilde, "The Picture of Dorian Gray." Clarice Lispector was a winner of several national literary awards. Her works have been translated into many languages.

Seminar, which is attended by students, graduate students and teachers of the Faculty of Linguistics, Faculty of Sociology and Law, and printing and publishing institution of NTU "KPI", opened by Vice Rector for International Relations, a member of the National Academy of Sciences of Ukraine Sergey Sidorenko. "Out of creativity there is no personality. Creativity is a specific motor activity of the person, it is not possible without the modern world, because everything that surrounds us, is the result of creative activity - he said in his opening remarks. - And today's event is very important for us, because it we reaffirm the importance for our university humanitarian components. "

The place of the writer in the Brazilian literature, told the participants of the meeting, First Secretary of the Embassy of the Federative Republic of Brazil in Ukraine Luis Fernando Machado. He also brought in the CPI recorded a recent television interview with Clarice Lispector, an excerpt from which the present saw on the screen.

Seminar, which is attended by students, graduate students and teachers of the Faculty of Linguistics, Faculty of Sociology and Law, and Printing and Publishing Institute of NTUU"KPI", was opened by Vice Rector for International Relations, a member of the National Academy of Sciences of Ukraine Sergey Sidorenko. " There is no personality beyond the creativity. Creativity is a specific motor activity of the person, the modern world cannot exist without it, because everything that surrounds us, is the result of creative activity - he said in his opening remarks. - And today's event is very important for us, because this way we reaffirm the importance for our university humanitarian component. "

The First Secretary of the Embassy of the Federative Republic of Brazil in Ukraine Luis Fernando Machado told the participants of the meeting about the place of the writer in the Brazilian literature. He also brought in the KPI a record of one of the last television interview with Clarice Lispector, an excerpt from which the present saw on the screen.
An interesting report - Clarice Lispector analysis of the work - was presented by the famous Ukrainian writer, playwright, literary critic and translator Vira Vovk, who is living sixty-five years in Brazil, and by her research activities and literary creativity brings together the culture of the countries with which she tied her fate.

"Creativity Clarice Lispector already belongs to world literature, and Ukraine should not stand behind, if only because the writer was born on our soil," - said Vira Vovk before starting the story about the life of the writer and her family, and before giving the detailed specifications of her prose, in particular of the first collection of short stories, and those that were written in the last years of her life.

A dedicated researcher Clarice Lispector art historian of Brazilian and Portuguese literature, a professor and a visiting professor at the University of Sao Paulo Nadia Battelle Gottlieb also made her report before polytechnics . Among other things, she talked about the features of the creative style of the writer, unique tone of her prose is slowly drawn into a somewhat bizarre worlds of her imagination: "Her speech - always at risk, in anticipation of the discovering. However, you understand that it will not happen, because life cannot be reproduced exactly. "And Nadia Gottlieb Battelle summarized the work of Clarice Lispector sisters, who were also women writers, and the fact that it is a book of memories of the eldest of them - Elisa Lispector, researchers have learned a lot of details about her family.

The team leader of the Department of Political Affairs of the United Nations in Ukraine Bogdan Nagaylo shared his memories with the audience about his own familiarity with the works of Clarice Lispector and the first impression of them.
Kiev Polytechnic carefully prepared for this seminar. The contest of translation was carried out at the Faculty of Linguistics. Its participants translated one of Clarice Lispector stories. Students who master the fine art at the Printing and Publishing Institute participated in the competition of illustrations for her works and presented them at the exhibition, where the works of fifty authors were exhibited. It should be noted that participants in both of these creative competitions were not only the representatives, so to speak, of specialized departments, but also those students who study technical specialties, and some of them have even won prizes. So after guest appearances winners of the competition were awarded diplomas. First places were taken by a student of linguistics Olga Gladka (literary translation) and Daria Kudashkina (book illustrations).

Finally, students of the Faculty of Sociology and Law - members of the artistic circle "Metamorphoses" showed the audience a theatrical fantasy based on the works Lispector “How it is called?".

And the final artistic part of the seminar was completed by the head of the department of graphics printing and publishing institute KPI Tatiana Osipova, who under the applause of the audience gave Luis Fernando Machado written by her Clarice Lispector portrait.

In the photo: Vira Vovk