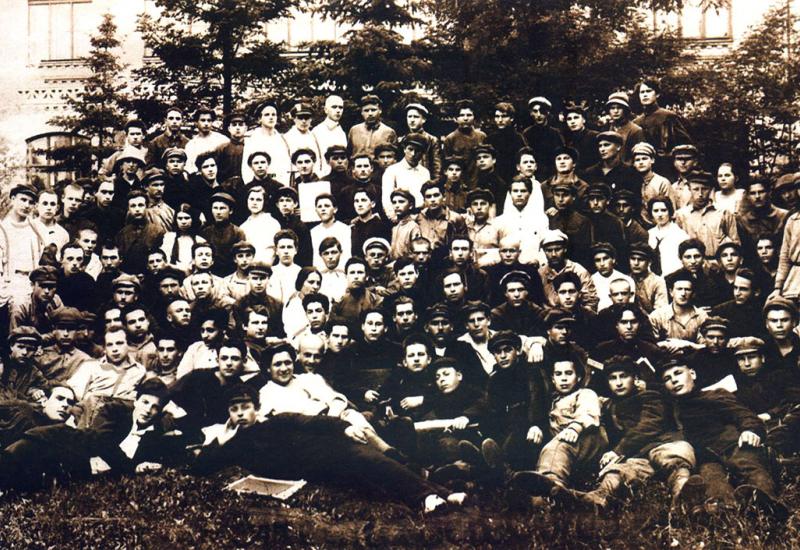 Long time at the higher technical school of Ukraine in educational process generally used Russian. In Russian printed the majority of textbooks and grants, the main scientific and reference books which we use still.

The Soviet power in the 20-30th of the 20th century actively reformed an education system, adopted a complex of acts, resolutions of Council of People's Commissars and Narkompros of Ukraine that allowed to enter the Ukrainian model of the higher education, to restore pedagogical and scientific activity on the new principles.

In the first postoctober decades Ukrainian took strong positions. After creation of  Ukrainian National Republic (UNR) in Kiev was opened the first Ukrainian gymnasium, approved the law on the state status of Ukrainian (15.02.1918.), exhausted "the main rules of the Ukrainian spelling" (24.04.1918.), Created Institute scientific language at the Ukrainian academy of Sciences (1924).

In the 20th of the 20th century reorganization, unification of system of the higher school on branch signs, its devices to requirements and rates of development of the national economy became an important problem of staffing. It is the period of restoration and further reconstruction providing preparation of technical shots, specialists engineers, caused the strengthened work, introduction of new curricula, reorganization of faculties and specializations, writing of new educational literature. In spite of the fact that for technical colleges teaching in Ukrainian was optional, nevertheless their Ukrainization became rather important. 1921-1930 were the most active period of an Ukrainization of science and state bodies of the Soviet Ukraine. At the VII KP (b) conference of Ukraine the decision on an Ukrainization of public institutions was made on April 4-10, 1923.

These changes did not bypass also the Kiev polytechnical institute where the number of students Ukrainians constantly grew, and in 1924-1925. Made 45%. Because of shortage of scientific and educational literature in Ukrainian of publishing house of Ukraine sent literature of the Ukrainian societies and fiction to KPI. For example, the State publishing house of Ukraine for students and working faculty of KPI provided the books translated to Ukrainian.  Among them "The alphabet there are political economies" - the author Lyubimov (initials in archival materials aren't specified G. I. Rods), "An initial course of political economy" - the author Mikhaylovsky (initials in archival materials aren't specified -  G. I. Rods). KPI printing house for release of textbooks in Ukrainian not less than 25 printed pages got a font and materials for 6000 rubles.

For statistical department of the National commissariat of education sent "The questionnaire about a condition of an Ukrainization to KPI" (21.10.1925.), Among which points were also such: the number of administrative personnel which knows Ukrainian, the number of teachers who give classes at faculty; teachers who will teach in Ukrainian in one, two, three years and who decide on term; disciplines, taught in Russian (for the lack of textbooks in Ukrainian, ignorance of language, unpreparedness of listeners; for other reasons). What measures are undertaken to teach in Ukrainian, and termikna of their performance; teachers could teach disciplines in Ukrainian if they didn't interfere with it the reasons are specified? Office-work of institute in Ukrainian and so forth is conducted.

Formation of the KPI new technical school, formation of the Ukrainian language environment changed the content of educational and methodical process, curricula, programs, courses of lectures and practical training. Time demanded new textbooks, grants, educational and methodical materials,  which directly would answer with the imminent educational task. Considering the commission on an Ukrainization attended lectures and checked knowledge of Ukrainian of teachers, warned about discharging of KPI of professors, did not pass test. Persons, not passed examinations in Ukrainian, released without dole.

In KPI opened 5-month-old for beginners and 3-month courses on Ukrainian. Classes were given after work till 2:00, and by those who lagged behind, paid for education.

Process of an Ukrainization of the higher school was slowed down by a lack of the general and special educational literature, means, rooms, insufficient knowledge of students, formal and even hostile attitude towards her of many Russian-speaking teachers. Almost in all documents of that time it was noted that students ukrainized quicker, than the faculty.

By results of examinations in faculty Ukrainian "the first category seven professors received, the second - six, a third - fourteen, the fourth - fifty". For persons who didn't pass examination the decision to carry out one more certification was made.

To accelerate rates of an Ukrainization, changed students of KPI curricula and programs, on the first courses entered new discipline of Ukrainovedeniye, to professors and teachers who couldn't teach technical disciplines prolonged the term of transition to teaching in Ukrainian, published the textbook "Chemical Technology", it is for the first time written in Ukrainian. Buying scientific and educational literature, preference was given the Russian-language edition (also accepted one copy in Russian).

It should be noted that the major professional objects (especially theoretical) taught mainly in Russian, and some general education disciplines - in Ukrainian. In 1929/1930 academic year all higher education institutions considered ukrainizirovanny for 40%, the professorate for 39,5% was Ukrainian, quantity Ukrainian among students grew to 62,8%, in 1930/1931 academic years - more than 70%.

The Ukrainization of the 20th - the beginning of the 30th of the 20th century promoted expansion of spheres of functioning of Ukrainian, increase in its prestigiousness among professorial shots of KPI, as well as education in general, gave the chance, despite their gradual folding, to create real prerequisites for preparation of national shots and to lay the foundation for further development of the Ukrainian scientific and educational book.  However over time lack of real state sovereignty of USSR, inconsistency and incompleteness of national policy of the government, strengthening of ideological pressure upon teachers considerably limited possibilities of scientific work and lowered the social status of the scientific intellectuals, eventually gave full turning of creation of the Ukrainian model of education. For a long time in KPI stopped teaching in the native language and the edition of scientific and educational literature, negatively affected development of technical Ukranian-speaking and other professional literature.

It becomes prestigious now to talk the refined Ukrainian, the understanding that profound knowledge of language - important a professiogramma of people of different specialties appears. Revival of language is urgent and uncontested. There is no language - there is no nation.