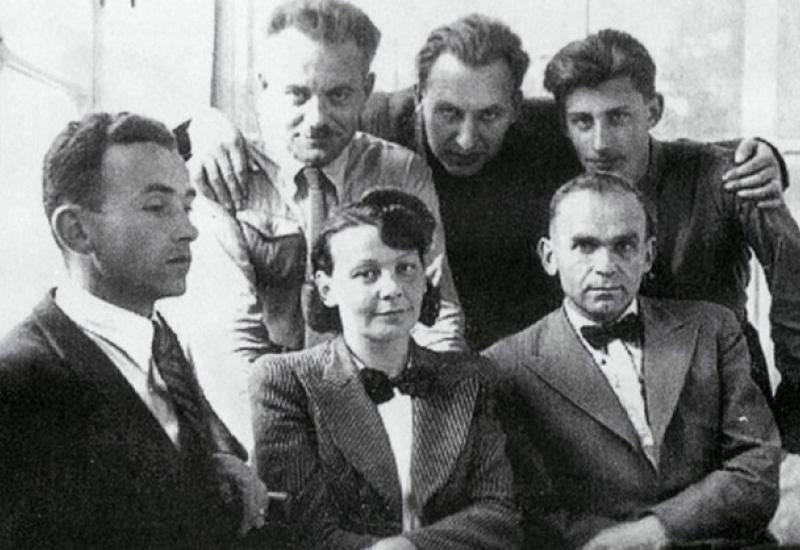 You can live your life in different ways. You can go long and silent, leaving unnoticeable traces on the sand of existence, which will be washed by time, but you can inflame shortly and lively, dazzling by shine everything around you. The history knows a lot of examples of such stars, whose lives burned instantaneously for the sake of the idea, but whose scarify we are honoring. Last year the 22th of July we celebrated 100 years from the birth of a talented Ukrainian poetess and patriot – Olena Teliga, whose star went out on the bloody sky of war just when she was 34. Her last bower she found in Babyn Yar, leaving some poetry collections and a great trace in Ukrainian history.

And in the net of crossing shades,
I’m blindly dreaming till the very morning,
Of God to handle the fabular gift:
The flaming death, not just the winter shrivel.

Olena Teliga (birth surname Shovgenova) was born 21 of July in Illinsk, near Moscow, in the intelligent family. Uliana Stepanivna, a mother of the future poetess was from Podillia from the orthodox family, a father, Ivan Opanasovich was a famous hydraulic engineer. When Olena was 5, in 1911, the Shovgenovs with 3 children (a daughter and two elder brothers Andriy and Sergiy) left for St. Petersburg, and in 1918 the family moved to Kyiv, where Ivan Opanasovich started working as a professor of Kyiv Polytechnic Institute in the direction of hydraulic and ameliorative engineering at the engineer faculty. It is Kyiv with which the future poetess will connect the best moments of her life, will repeatedly recall it in her letters and poems.

Life in Kyiv was definitely different from St. Petersburg’s, as here the Shovgenovs was caught by The Ukrainian revolution. Ivan Opanasovich became a minister of the Ukrainian National Republic government, and the elder brother became a soldier of the UNR army. At that time Olena was still in the captivity of the teenage dreams. From the very childhood she was attracted by nature, gardens and parks, picturesque squares of the city. May be this admiring awoke in her the poetical imagination. It’s necessary to denote, that in her family a younger brother Andriy became a poet too.

After a defeat of Ukrainian nationhood in 1920 her father and elder brother had to emigrate. And Olena with her mother and younger brother stayed in Kyiv. To make a living the mother was selling some domestic things, and 13-years old Olena was working at the communistic land parcels for a ration, got a job of commissionaire in the already native Kyiv Polytechnic University were her father had lately worked. “With a mysterious glad smile I was washing the floor and besmirched utensil, with the same smile I was running and sending notifications or sawing the woods, − admits Olena in the latter to her friend. – All those things didn’t troubled me, and I was doing it like in a dream, doing diligent, but aren’t being penetrated ”. that was the beginning of the mental hardiness.

In July 1922 Olena with her mother and brother left for Czechoslovakia in emigration, where her father Oleg Opanasovich became the first rector of Ukrainian economic academy in Podebrady. On graduating the courses in Podebrady, she becomes a student of literature-historical faculty of the Highest Ukrainian teacher's institute in Praque. Involving herself in the impetuous student life, Olena takes part in the literature evenings and discussions, communicates with N. Livycka-Holodna, E. Malaniuk, Y. Dragan, O. Olgych, L. Mosendz. But for unknown reasons she didn’t receive a diploma.

During her student years Olena Shovgenova met her future husband – Myhaylo Teliga, a Cuban Cossack, bandura-player, recent major of UNR army, who she married the 1 august 1926.

Just in 1927 Olena is being talked as a poetess, though it’s not found the publications of her first poems. Without the author’s permission her friends send a latter with Teliga’s poems to the editor of “Sci-literature reporter ” D. Dontsov, who was the first to make out the real poetical talent in yet imperfect works of the young poetess.

Soon the couple moves to Warsaw. That was the time when they’ve been followed by poverty. It’s said she had to perform musical programs in night cabaret or even work as a model, until she could get a job of lower grades teacher. During these years she is actively published in “Visnyk” and other journals, where were not just her own poems, but also prose and publicistic works. So in 1933 was shown the fragment of short-story “Abo-abo”, as a basis of which were taken her impressions of living in Kyiv during Soviet political regime. Olena responds to appearance of other writers’ works, tries to interpret common objects and figures in her own way.

In December 1939 the Teligas left for Krakiv, where Olena met her old friend Oleg Kandyba-Olzhych – a famous poet and scientist, a political and civil figure, one of the representatives of national movement. The conversation with him was significant for her future, as exactly from that time she started her struggle in OUN.

A heavy work thrust upon her shoulders. Olena was preparing ideological materials, which were being sent to Ukraine, was making texts for letters. Firstly revolutionaries didn’t take a tender young woman seriously, they thought she hadn’t been suitable for hard revolution work, but then they saw a real patriot in her.

Although her life in Poland was really blusterous, she had something in her soul that was magnetizing her to Ukraine. She couldn’t resist it so in July 1941 Olena with one hiking group and a writer Ulas Samchuk crossed Sian and moved to Lviv, in Kyiv she was the 22 of October. That was a realization of her dream.

That half-destroyed capital met her daughter unpleasantly: “I was passing by familiar Sviatoshyn, but… there were no familiar faces; all the faces were sad and withdrawn, instead of joyful motherland – blacken and bent Karavayivski dachi, as a symbol of general humiliation. Rundown Politechnik, tacky park, where were passing the childish amusements. Everything changed… everything new…”

Unsparingly, Olena Teliga and hundreds of her mates began reconstructing the civil, political and cultural life in Kyiv. In literature organization there were only disruptions, but the poetess organized a Ukrainian writers’ community, opened a food services area for her companions.

That time was living a poetess in “some alley in an old two-floor house, her apartment was on the ground floor. The windows from all the chambers looked in the yard. The mistress was an old lady… At the two walls – all-over paintings, portraits and icons. Lots of dictionaries – Ukrainian, Russian, Czech…” But, regardless such conditions, every morning the poetess was nicely dressed and had a glad smile on her face.

To realize her tasks more widely, Olena Teliga started editing the weekly publication “Lytavry”. The newspaper concerned about different questions and had a bright anti-imperial color. It was difficult to work for a poetess, as there were few veterans of pen alive, young people had already the soviet mentoring, and the articles, in which authors were panegyrizing the Fuhrer and his “New Order”, Olena Teliga refused to publich despite of the fact, that was a reason for delation to Gestapo.

The poetess didn’t take into consideration the enacting of German regime, impudently and principally ignored all the directions. So “Lytavry” was prohibited, the arrests began. Though she was alerted that Gestapo was planning entrapment in the building of Community, in the private conversation with M. Mykhalevych O. Teliga accented: “I won’t emigrate from Kyiv again! I can’t… ”

The poetess made the choice herself, and so did her husband Myhaylo. While being arrested he named himself a writer to be with her. The 21 of February in Babyn Yar Olena Teliga with other OUN figures were shot by fascists. In Gestapo O. Teliga was in the jail ward №34, where soon was found a sign, made with her hand: “Tere was and from here went for an execution Olena Teliga”. Upper was scratched a national symbolically shown as a sword trident. And one of the German officers after her death admitted: “I have never seen a man who died as heroic, as this beautiful woman”.

Dozens of years we knew nothing about a figure of our poetess and patriot Olena Teliga. Her name arose from oblivion only 50 years after her death, when in February 1992, in Kyiv in Babyn Yar was built a memorial cross in her honor, the street and Ukrainian Woman Community were named after her, founded International art and literature award. Nowadays we know only 41 poems by the poetess. During her life she couldn’t publish any of her collections. Though she hasn’t left a huge artistic legacy, her life was short, but bright and full of great deals, so it must be in our memory forever.