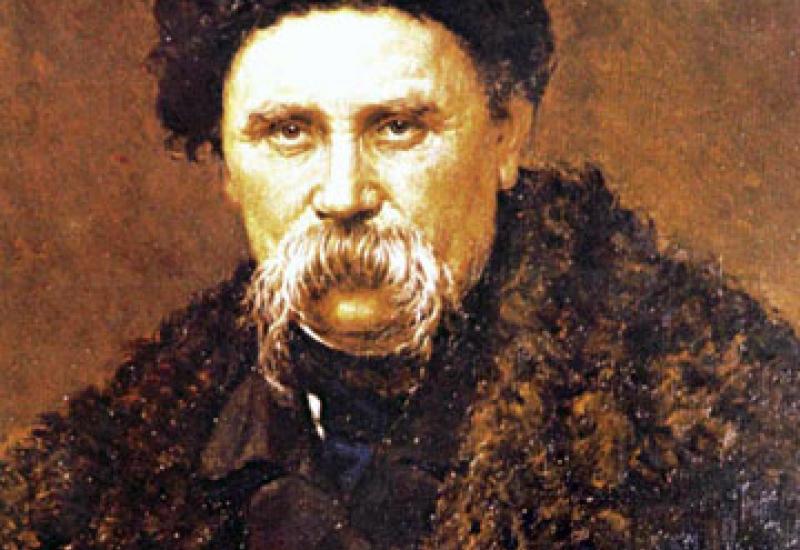 Given the fateful and tumultuous events in Ukraine, we see that Shevchenko, as this tragic new-found Heavenly Hundred of modern young heroes of proud and invincible country who died on Independence Square, lives among us, adds boldness and confidence in dealing with our overt and hidden enemies .

Taras Shevchenko will live forever for Ukraine and in Ukraine. He is now more than ever, organically merged with its big, unconquered people and steps firmly everywhere in a free state, subconsciously and consciously by the mouth of each of the martyrs of the nation, regardless of the age, said to the offenders:

...will not escape
and will not hide: everywhere
truth-revenge will find you; and people
liy in wait for you,
catch you and will not judge,
will shackle you tightly,
and will lead you in the village to execute...
("Оsia. Chapter XIV").

Shevchenkovo ​​innocent suffering - a symbol of years of the crucifixion, the destruction of the Ukrainian people. Martyrdom Shevchenko made ​​his personality enlightened and saturated with terrible foreboding and apocalyptic scenarios terrible inevitability in the fate of Ukraine for centuries:

Will diy, will perish Ukraine,
No trace will be left on the ground...
("Оsia. Chapter XIV").

In contrast to these words  the artist will write and those where unconditionally believe in the triumph of truth and justice:

Will be truth in humans?
Should be, because the sun will rise
And polluted the earth will be burn.
("O people, poor people!").

Poet, being in 1843 and 1845 in Chyhyryn, would tell its most outrageous and bitter feelings about defiling center of Cossack glory in XVII-XVIII centuries, turning it into a void in 1793, during the accession of the Russian Empire:

Hetmans, Hetmans, if You
would get up,
Would get up and look at Chigirin,
Which you build, where you dominated!
Would wept bitterly, because you would not know
Cossack glory in squalid ruins.
("Haydamaky").

So  afraid of him, and so did not want to hear his call-up prayers, messages. In today's world really one more people came to life, beautiful and full of dignity, which was surprised to find himself, identified himself not only of ancient glory, not only with the blood of the land on which walked for hundreds of years; people, despite external threats, invasion at the beginning of the XXI century, enemy troops from the northern neighbor to the territory of a peaceful sovereign country, despite the torture, blood, murder at the hands of legitimate banditry in the face of a stranger Ukraine, yet the Ukrainian government finally saw the light of great prospects and future.

Kobzar felt extremely bitter loss  of great Cossack liberties because of indecision and lack of foresight  in Ukrainian leaders. To this period, the spokesman ancestral aspirations for freedom of the Ukrainian people dedicated his paintings ("Gifts Chyhyryn", "Chyhyryn, view from Subotovskiy path", "Chigirinskiy Nunnery") and literary ("Chigirin, Chigirin ...", "Cold Ravine" , "For what we love Bogdan", "Dug grave"). Big revivalist of slumber, and partly deformed Ukrainian psyche, as the representative of "Executed Renaissance", literary critic Sergey Efremov said, "opened the lid of our coffin, which guardsmen Russian Empire nailed." Today, in this coffin for hundreds of years by the grace of God resurrected Ukraine, paying hundreds of lives and shed the blood of the holy martyrs and heroes. Shevchenko, expressing in verse bitter and dramatic past of Ukraine, made a visible projection of its future. So  afraid of him, and so did not want to hear his call-up prayers, messages. In today's world really one more people came to life, beautiful and full of dignity, which was surprised to find himself, identified himself not only of ancient glory, not only with the blood of the land on which walked for hundreds of years; people, despite external threats, invasion at the beginning of the XXI century, enemy troops from the northern neighbor to the territory of a peaceful sovereign country, despite the torture, blood, murder at the hands of legitimate banditry in the face of a stranger Ukraine, yet the Ukrainian government finally saw the light of great prospects and future. This people - Ukrainian, who never so called by Taras Shevchenko. Unforgettable Peter Yatsyk, philanthropist, a Canadian citizen of Ukrainian origin, who financed language competitions dedicated to raise the prestige of the Ukrainian language, said:" in all the works of Shevchenko, we often encounter the word" Ukraine ", but not in the same place if there are any words "Ukrainian". There was no state - there was no people in the perception of the poet. territory was terribly punished  "for Bogdan",  " for mad  Peter", for "so bad lords over" ... punished long ago, was punished recently, punishable by now visibly on all areas of the vast region. Unconditionally and without looking, nice modern heroes with sacred slogan "Glory to Ukraine" - "Heroes of the glory."

Holy righteousness in the land
they predicted, and they were crucified
For the freedom, holy freedom!
("Mary").

Now suffering of every Ukrainian, with a worthy and fearless heart blessed by holy grace of God, where through an indescribable sadness we confidently moved in hope, action and spirit of this revolt against any harm caused by both internal and external enemies.We straightened and felt ouselves higher; do not bend, crawl before the invaders with  pro-imperial intentions again colonize the free people and pseudo government officials who love "on his brother's skin and not the soul. "Finally, we do not whine, and fearlessly overcome danger, walking through hell fire debris of the Soviet system, throw a veil from our eyes and go on road freeing ourselves from all, fake warranties false idea of ​​"common Slavic Russian world." Ancient executioners and torturers today Shevchenko will provide fateful sentence in the poem "Osia. Chapter XIV" with the hope that in the near future  ruthless offenders of his people will suffer just punishment from free people  "Next, on the cross without executionaire and without a king you who were possessed with devils,  tear, crucified, and with your blood will be given  dogs to drink ... Reflecting on the fate of many talented and gifted, all the more you realize that the appearance of Shevchenko  in the spiritual space of Ukraine is an enigma,  mysterious and unexplained until the end. Activist, thinker, rebellious and not able to adapt, to serve before the power, does not disappear from sight of those interested in the phenomenon of human fullness and rapid response to their environment, as well as those whom calls Shevchenko may not seem very clear. The value of the figure of the great creator over the years more and more insistently becomes aware of the people for himself, and the works he is given a new meaning. In spite of the century, this figure is still alive. It is  accepted both by  highly educated people, and those citizens who are far from education, but most treasured them are not only a sense of freedom and human dignity, but also the dignity of all of the great country and its people.

Shevchenkovo ​​life - a symbol of the thorny path of struggle for freedom. It appeared before the Ukrainians as  living example of how to step by step freed from captivity, depression, discouragement, inferiority complex and a national depression. Years pass, century, and the sharpness of the power of words and Shevchenko lives. The spirit of freedom, human dignity - the great universal concepts - through the centuries trials experienced by Kobzar come to Ukrainians and give them confidence in their own self-affirmation. Eugene Sverstyuk in the book "Shevchenko and Time" examines the poet rebellion not only to denunciations, which has always encouraged the despotic system, not only the indestructibility of persecution, but also the mystical inner strength to believe in your endurance and sacrifice, being so close to the fire hazard: "Hugo wrote his pamphlets on the Little Napoleon in exile in Brussels. Heine his satire "Germany" - in Paris, and a man, bought out from serfdom in the country of original despotism,  interpreted the concept of the freedom as well, that he wrote his famous poem "The Dream" at the Academy of Fine Arts - opposite the royal palace. "  Shevchenkovo ​​word addressed to the reader with a pure heart, confident in its position. Kobzar word is not for townsfolk, amorphous people who are prone to slavery, without a clear position where you want it to say, lackeys, which at the most dramatic moments of contemporary history want to serve everyone, declaring their neutrality, but in fact support the evil , lies, and despotism. These people swear even in love and respect for Shevchenko's work but better without severity, "to something easy to not bother," a matter of conscience spoke to, did not affect the problem of honor and dishonor, the problem of honesty in front of his "I" . Not one speaker, leaving the scene, drops false tears of Shevchenko "Sadko cherry colo hati", from the buzz of beetles and many more which "innya." Of course, this way easier to avoid for yourself whatt will hook  sleep conscience, awakening from sleep of indifference. But few people dare to quote the words in which the author raises the issue of national shame, dignity, honor and responsibility to their own people:

Shevchenko is a very inconvenient both for as  pro-imperial forces , as well as hypocritical rulers who, with one hand on the Gospels, like swear allegiance to his people, promising peace and stability, and a second hand give ammunition to kill innocent civilians. Belonging to the Cyril and Methodius Brotherhood, Great Kobzar, like his friend Nikolai Kostomarov, considered it their duty to speak about the most tragic pages of history of Ukraine, namely, the elimination of the Zaporozhian Sich, the division of our country between Poland and Russia in the XVII century. In "Act of God", written by N. Kostomarov, there is a wasp-explained analysis of the main problems that led to the unfortunate experience periods of Ukraine "was captured, because it is not in its simplicity to learn that there was a king  and  the king of Moscow was the same as the idol and the torturer. "Ideas proclaimed by Nikolai Kostomarov, are consonant with the works of Taras Shevchenko. This applies to poetry "Irzhavets," "Dug grave," anti-imperial poem-comedy "The Dream". According to Ivan Franko, this poem - "this is a great appeal of the" dark kingdom "for all current and past grievances of Ukraine."

Motives of greediness, aggressive attitude to Ukraine from Russia empire, unwillingness and reluctance to accept it free, estimation of it as a threat to overthrow the tyranny of the original sound today are again acute and urgent. Scenes of hate attacks on our state, which he wrote and languished in prison Taras Shevchenko strike not only Ukrainian, but also the whole civil world. Therefore creativity of Ukrainian artist, the 200th anniversary of his birth we celebrate,is  so important to us that speaking about Ukraine's past, he predicted our future.