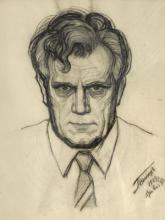 The university art gallery is unique among universities' art galleries in the world both in artwork and activity. It is not only the epicenter of artistic events at the university, but also an integral part of the educational process, as well as aesthetic and spiritual guide for technical youth.

The first KPI rector V.L. Kyrpychov believed that an engineer must be skilled as a scientist, be able to implement technical ideas into practice and do it according to the laws of beauty as an artist. This principle of the unity of humanitarian and technical training V.L. Kyrpychov followed not only theoretically but also practically. Fundamentals of philosophical culture at the engineering institute were laid by coryphaeus of the world’s philosophical thought S. Bulgakov and later – the head of the Philosophy Institute – P. Kopnin. Architectural schemes were taught by an architecture academician O. Kobeliev, now – the Doctor of Science A. Pavlov. Drawing was taught by a renowned Ukrainian artist P. Pymonenko, and in modern period – the hon. artist of Ukraine G. Synytsia (1908-1996). Currently, the hon. figures of arts of Ukraine L. Dmytrenko and artists such as S. Biliaev and V. Veselka work hard at the institute.

Much attention to the problem of the humanization of technical training pays the current rector M. Zgurovsky. In articles on this subject, inter alia, he writes: "The obvious conclusion is that the current time is the age of science engineering and technology, the development of which must correspond to the highest humanitarian idea of the world ...". The idea of the first rector of KPI to create the art museum (Zurich Polytechnic as an example), was incarnated a century after in the form of the university art gallery. Art gallery was established in 1992 and became one of the first university art galleries in Ukraine. The basis of the gallery was laid by an artist who for the half of a century was considered to be a formalist, nationalist and the follower of M. Boichuk’s art school. G. Synytsia still remained loyal to the ideas of the Ukrainian school of monumental painting; he developed and adopted these ideas in his work. He revived the Ukrainian coloristic school of monumental art and was nominated for National Prize of T.G. Shevchenko by the polytechnic staff, which he did receive in 1992.

With the participation of the Philosophy, Sociology and Law Department, a new program has been created in the art gallery. It involves elements of popular culture, aesthetics, ethics, and language in the educational process – the elements that shape national identity. In addition to the permanent exhibition of G. Synytsia’s works, the gallery organizes various exhibitions: "Scientists that paint", "Computer Graphics" and so on. Works of famous and young artists and art groups are also exhibited. Each year the university traditionally holds general exhibition-competition "Talents of KPI" – the best work of art among students, professors and employees are exhibited. In the gallery are also art studios for students and children of professors and employees. To revive the ancient Kyiv folk woodcarving traditions, children experimental folk painting studio "Oranta-KPI" has been created. The studio uses a special method of awakening of artistic ethno-genetic memory developed by an art critic G. Mestiechkyn, the associate of G. Synytsia. The technique helps to liberate an artistic memory of kin embedded in the subconscious. Thanks to this - unique and extraordinary works of art created by children are exhibited in the museums of Kyiv.

G. Synytsia Art Gallery has united famous artists and cultural workers: architecture academic L. Tots’kyi; sculptor of monuments, engineer, historian and astronomer, G. Synytsia’s associate – G. Marchenko; folk artist, winner of P. Chubynsky Prize – I. Prikhod’ko; folk poetess N. Vinars’ka, master of painting L. Maydanets; art critic, folk-education talent G. Mestiechkyn; sculptor of monuments, pedagogue M. Shkaraputa; culture expert, gallery director S. Tymchenko and others. At the art gallery, "Art salon" is also established, which is known as the spiritual center of Kyiv, where famous scientists, artists, culture and art workers perform. Thus, the art gallery, as the systemized model of humanization of technical education through art, forms high-spiritual personality, contributes to the awakening and development of artistic skills, develops aesthetic feelings and tastes, increases the overall level of cultural identity. Clearly, the art gallery is an oasis of aesthetic and spiritual recreation at the technical university, promotes the image of the university in the eyes of visitors, foreign partners and perspective students, contributes to the process of humanization of education, and affects the psychology of relationships at the institute.