A New Magna Charta Universitatum Give Responses To Contemporary Challenges 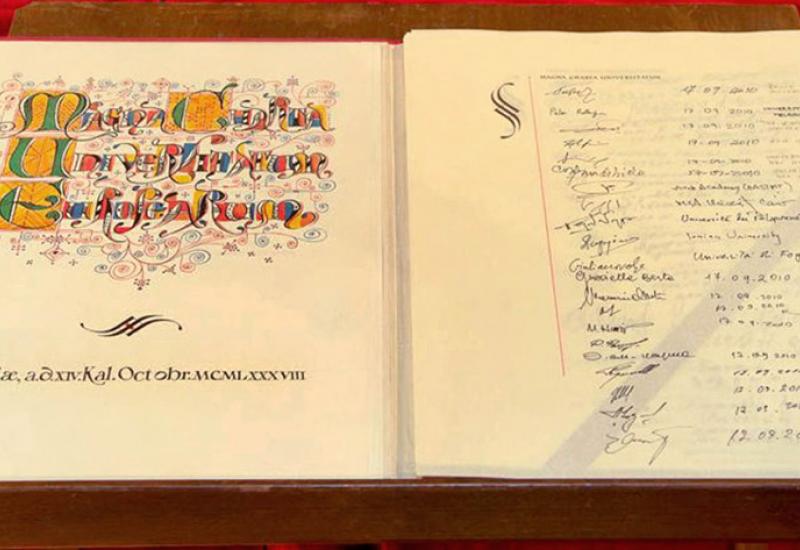 Rector of Igor Sikorsky Kyiv Polytechnic Institute, Academician of the National Academy of Sciences of Ukraine Michael Zgurovsky has signed the new version of the Magna Charta Universitatum: the MCU 2020.

The document reflects the values ​​shared by the global academy and the responsibilities they assume, given the role of universities in preserving the planet and promoting health, prosperity, and enlightenment throughout the world. It summarizes the common vision of universities of their role in the modern world and the principles upon which the mission of universities should be based, based on the need to respond to the challenges faced by humanity after the publication of the first version of the Magna Charta Universitatum.

This original version was signed in 1988 on the occasion of the 900th anniversary of the University of Bologna (Italy) - the oldest higher education institution in Europe. At that time, 388 rectors of leading European universities who took part in the celebrations in the main square of Bologna - Maggiore signed the Magna Charta Universitatum.

The Magna Charta Universitatum has defined a new role for universities that have proliferated around the globe, dramatically increasing in variety as well as scope and mission. Universities have increased the number and diversity of students seeking an academic education. Such changes have rapid technological development. At the same time, the document emphasizes preserving the centuries-old traditions of higher education. Therefore, the fundamental principles of modern universities are as follows:

1. The university is an autonomous institution at the heart of societies differently organized because of geography and historical heritage. It produces, examines, appraises, and hands down culture by research and teaching.

To meet the needs of the world around it, its research and teaching must be morally and intellectually independent of all political authority and economic power.

2. Teaching and research at universities must be inseparable if their tuition is not to lag behind the changing needs, the demands of society, and the advances in scientific knowledge.

3. Freedom in research and training is the fundamental principle of university life. Governments and universities, each as far as in them lies, must ensure respect for this fundamental requirement. Rejecting intolerance and always open to dialogue, a university is an ideal meeting ground for teachers capable of imparting their knowledge and well equipped to develop it by research and innovation and for students entitled, able, and willing to enrich their minds with that knowledge.

4. A university is the trustee of the European humanist tradition. Its constant care is to attain universal knowledge, to fulfill the vocation it transcends geographical and political frontiers and affirms the vital need for different cultures to know and influence each other.

Therefore, as in the earliest days of their history, according to the MCU, they consider a general policy equivalent status, titles, examinations (without prejudice to national diplomas), and award of scholarships essential to the fulfillment of their mission in the conditions prevailing today; furthermore, they encourage mobility among teachers and students.

Today, the Magna Charta Universitatum has been signed by 904 Universities from 88 Countries. More than 70 of them are Ukrainian; it is the largest among the higher education institutions of the former Soviet Union. Igor Sikorsky Kyiv Polytechnic Institute is, of course, one of these Ukrainian universities.

In April 2000, in Bologna, the MCU Observatory Board was established to monitor the implementation of the main provisions of the document. According to its members, “The Observatory Board ensures the integrity of intellectual and scientific work in institutions and society, so that to strengthen trust in the relationship between universities and their communities, whether local, regional, national or global.”

Of course, since the first version of the Magna Charta Universitatum was published, the world has dramatically changed - politically and economically. Large-scale and rapid social transformations in many countries could not but affect the global academy. That was the reason for this new declaration of the MCU.

In 2020, an international group of experienced higher education professionals from different countries prepared a new draft of the Magna Charta Universitatum - MCU 2020. Its text was approved by the Observatory Board on March 12, 2020.

The new draft Magna Charta Universitatum removes nothing from the original fundamental values to which universities signed up but also expands it. The authors of the document strive to be responsive to and resonate with contemporary challenges and concerns. Therefore, the new Charter still reflects the fundamental principles of autonomy and independence of universities. It also recognizes the more global nature of what universities do and the wider range of local responsibilities, which they have. The MCU states the core values vital to strengthen the role of universities in the preservation of the planet and promoting health, prosperity, and enlightenment worldwide.

The official implementation of the new version of the MCU will take place at the forum “University Values ​​and Responsibilities: Responding to the Challenges of the Future”, which will be held by video conference on June 16 and 17. It is preceded by the signing by the universities of the Magna Charta Universitatum-2020 individually.

It was this new draft of the document that Rector Michael Zgurovsky signed as the signatory of the first version of the Magna Charta Universitatum on May 11, 2021. Igor Sikorsky Kyiv Polytechnic Institute is invited to participate in a virtual forum. The University will also join the discussion of global perspectives on higher education and its role in responding to the challenges facing humanity.