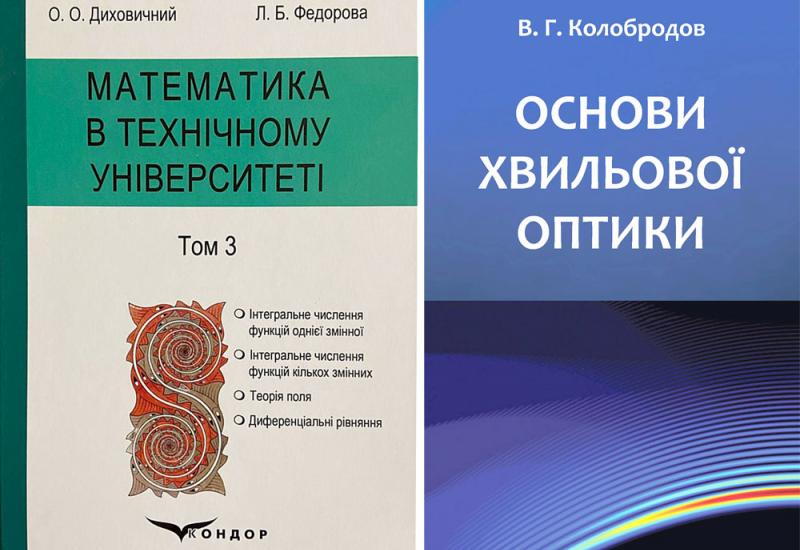 According to the decision of the Academic Council of the National Technical University of Ukraine Igor Sikorsky Kyiv Polytechnic Institute from 29.06.2021, the winners of the competition for the best textbooks, manuals and monographs in 2021 were announced.

The first prize was awarded to I.V. Alekseeva, V.O. Gaidei, O.O. Dykhovychnyi, L.B. Fedorova for a textbook in three volumes "Mathematics at the Technical University”.  "Mathematics at the Technical University" is an educational complex consisting of a textbook and a workshop. The theoretical and practical parts of the complex correspond to the curricula of higher mathematics of the bachelor's degree of technical universities. The complex can be used to provide both full-time and distance or mixed form of studying.

One of the authors, Oleksandr Dykhovychnyi, informed that the three-volume book is a joint work of four KNU graduates, now candidates of physical and mathematical sciences, associate professors of the department of mathematical analysis and probability theory: Iryna Alekseeva, Viktor Gaidei (he is no longer with us), Lydia Fedorova. We started within the framework of the pilot project "Distance learning for bachelors in the field of" Metrology and Measurement Engineering "in 2009. Then we created and posted on the distance learning platform "Sikorsky" a series of distance learning courses "Mathematics for Engineers and Economists" and a bank of computer tests. Now work is underway on statistical analysis of the effectiveness of the tests created on the basis of modern mathematical models.

Two second prizes went to G.S.Vasylyev and Y.S. Gerasymenko for the monograph "Development of the method of polarization resistance and construction of corrosion control devices based on it" and V.G. Kolobrodov for the textbook "Fundamentals of wave optics". By the way, the gap between first and second place was only two points.

The monograph is devoted to the development of a method for determining the rate of corrosion destruction of metals by polarization resistance. The publication covers the work begun at the Department of Technology of Electrochemical Production under the leadership of the world-famous electrochemist, corresponding member of the USSR Academy of Sciences, L.I. Antropov joined by Y.S. Gerasymenko, now Doctor of Technical Sciences, Acting head of the department, and continue to this day with the participation of Associate Professor G.S. Vasyliev.

Data on modern approaches that allow measuring polarization resistance quickly and with high accuracy will be useful for scientists and professionals. The monograph for the first time collects and systematizes the main cases of errors in measuring the corrosion rate by the method of polarization resistance, which will be needed to better understand the possibilities of the method when applied in practice.

A simple and clear style of presentation of the material allows you to use separate sections of the monograph in the educational process in the study of disciplines "Theory of corrosion of metals", "Corrosion and corrosion protection" and other disciplines speciality 161 "Chemical Technology". The monograph will also be useful for researchers, teachers and students of other chemical and materials science specialities, specialists in various fields.

The textbook of V.G. Kolobrodov contains basic information on optics, which is studied in higher education institutions: The stages of development of optics, electromagnetic theory of light, reflection and refraction of light based on electromagnetic theory, basics of electronic theory of light dispersion, light interference, scalar theory of light diffraction, optical holography, light polarization, optically anisotropic media and light scattering are considered. Complex theoretical provisions of optical phenomena are presented in an accessible form for students of technical specialities. For the practical assimilation of theoretical material, considerable attention is paid to examples of problem solving.

Valentyn Georgiyovych is a well-known and respected person at the university: Doctor of Technical Sciences, Professor, Head of the Department of Optical and Optoelectronic Devices since 1994. The main field of scientific activity is research, design and testing of thermal imaging systems for military, space, scientific and civilian purposes. He conducts research on the creation of fundamentally new optical systems based on diffraction optics. He is the author of more than 500 scientific papers, including 16 textbooks, 15 monographs, three of which were published in Germany and China, 54 patents. Three textbooks were once recognized as the best among Igor Sikorsky Kyiv Polytechnic Institute scientific publications. He has prepared 9 doctors and 18 candidates of sciences. "Honored Professor of NTUU” Igor Sikorsky Kyiv Polytechnic Institute", laureate of the State Prize of Ukraine in the field of science and technology in 2014," Excellent Education of Ukraine "," Outstanding figure of NTUU "Igor Sikorsky Kyiv Polytechnic Institute".

As noted by the Chairman of the Verkhovna Rada Commission on Research and Innovation Prof. O.V. Linyuchev, the competition was held in two rounds. A total of 14 publications were submitted for consideration: 7 textbooks, 6 monographs and one English-language work. All publications were reviewed: three reviews are external and one is internal. Feedback was completely positive. Some remarks concerned only the method of presenting information, registration, etc. "The first prize was awarded unanimously," Olga Volodymyrivna comments. - The textbook is well published, presentable, with a large number of tasks and tasks. Hard work. The other two publications are also rich in content. "

Congratulations to the author's teams and we wish you further success!