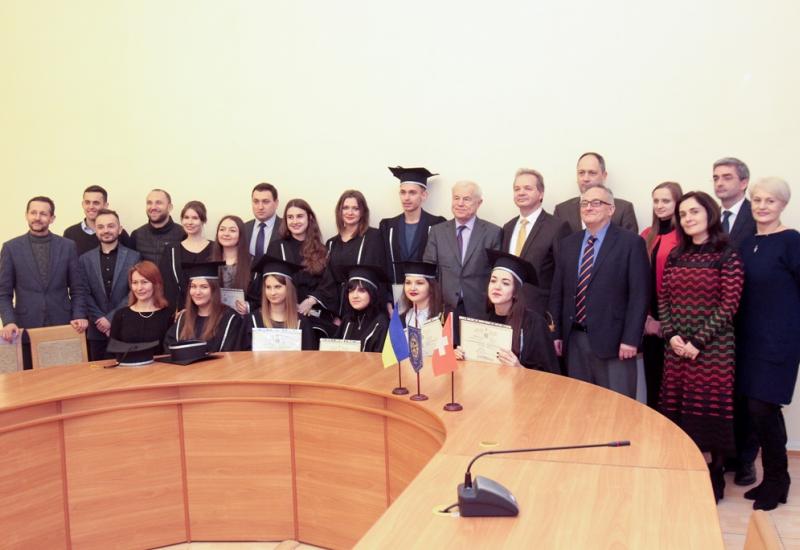 In the KPI it lasts the graduation ceremonies for postgraduates of institutes and faculties. Not only former students, their teachers, parents, and friends take part in the ceremonies, but also the guests of honour.

Therefore, on January 17,  Extraordinary and Plenipotentiary Ambassador of Switzerland to Ukraine Claude Wild, Director of the British Council in Ukraine Simon Williams, Head of the Centre for Security Studios, Minister for Temporarily Occupied Territories and Internally Displaced People in 2016-2019 Vadym Chernysh, scientist at the Centre for Research and Conflict Resolution of the Federal Higher Technical School in Zurich (Swiss Confederation) Anna Hess and others came to congratulate the graduates of the Faculty of Sociology and Law, who studied under the educational program Conflict Resolution and Mediation.

According to the Dean of the Faculty of Sociology and Law in the KPI Anatoliy Melnychenko, eight postgraduates, who attended full-time education, got a Master's degree (four of them with honours) and three students, who had distance education (one of them - with honours). It is the second graduation of specialists in this new specialisation for our country.

The distinguished guests attended the graduation ceremony of the FSP postgraduates not by coincidence. It should be reminded that the master program "Conflict Resolution and Mediation" was opened in the KPI in 2017.  It was developed by faculty and academic staff together with workers and experts from the Ministry of Temporarily Occupied Territories and Internally Displaced Persons of Ukraine and partners from the United Kingdom and the Swiss Confederation. The purpose of the implementation of this specialization is to prepare the specialists of peaceful conflict resolution, which are absolutely necessary for Ukraine today. But not only they are needed in our country, that`s why people who can be skilled in conflict prevention and reach a peaceful agreement on sensitive issues, are also being trained at universities in countries that are considered to be well-off, for instance, Johns Hopkins University, University of Westminster (UK) and others.

However, for Ukraine, which is now in a state of undeclared war, but will sooner or later have to solve many reintegration problems, mediation and conflict experts are especially valuable, especially those who fully possess the tools that provide psychology, sociology, the science of public administration and other disciplines mastered by graduates of the Faculty of Sociology and Law.

"When we started this new program for Ukraine with the help of our partners in 2017, we, of course, hoped that our graduates would work in post-conflict conditions," said the first Vice-Rector of the KPI, Academician of the NAS of Ukraine Yuriy Yakymenko. - Unfortunately, we see that the situation has not changed yet. And it even increases the need for the professionals in mediation and conflict resolution that we educate in our university. Today, with the participation of our partners, we have succeeded in creating a comprehensive training program for such specialists, and their first graduates have proved that they are in high demand in our country. So today we are honoured to award Master's Degrees to new graduates of the program. We hope that their major, qualification and interest in work will be useful in solving the problems and conflicts that our country has faced.

"After the official greetings and speeches, the first Vice-Rector of the University Yuriy Yakymenko and the Extraordinary and Plenipotentiary Ambassador of Switzerland to Ukraine, Claude Wild, gave the graduates their master's degrees.

It should be emphasised that the Igor Sikorsky Kyiv Polytechnic Institute became the first university in Ukraine that prepares masters in mediation and conflict resolution. Moreover, according to Anatoliy Melnychenko, preparation for this educational program will extend to the bachelor's, as well as on the scientific-educational (training of PhD) levels. And one of the important features of training such specialists in the KPI is their immersion in the real issues and activities of the relevant authorities, as well as cooperation with the best European experts.