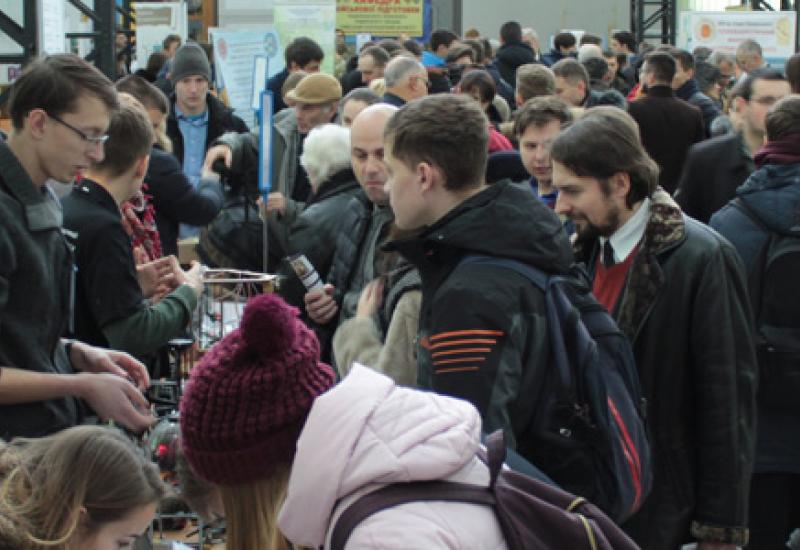 The Open Doors Day, which took place at Igor Sikorsky Kyiv Polytechnic Institute on December 15, began at the State Polytechnic Museum at the University. Institutes and faculties have deployed their information stands in its largest exposition hall. Therefore, visitors had the opportunity to communicate with teachers and students and get answers to questions about training directions, organization of practices and internships, employment opportunities, etc., and after that to explore museum collections and exhibits, among which there are many truly unique ones.

Subsequently, future entrants and their parents received general information about the upcoming campaign next year from the Academic Council. The first to have a speech before them was the first pro-rector of Igor Sikorsky Kyiv Polytechnic Institute, academician of the National Academy of Sciences of Ukraine Yuriy Yakymenko. He briefly told the guests about the university, its academic schools, traditions and study features. He focused more on the possibilities to build their own educational trajectory within the chosen specialties, as well as taking into account the emergence of various interdisciplinary programs and programs of double diplomas with foreign higher educational establishments. He informed the audience about the employment of Igor Sikorsky Kyiv Polytechnic Institute graduates, their compliance with the requirements of the labor market and prospects of career growth, which are provided by the knowledge gained at the university and its diploma.

Deputy Secretary of the Admission Committee Radmila Segol told about the terms of admission to the university. She called her speech “What should I know as an entrant of Igor Sikorsky Kyiv Polytechnic Institute – 2019”, but at the beginning she noticed that the dates of the introductory campaign and information about the competition and its peculiarities are still tentative, since the order of the Ministry of Education and Science of Ukraine, in which all issues related to the entry into higher education in 2019 will be finalized soon, and are currently in the Ministry of Justice for approval. Immediately after the release of this document, the calendar of the campaign and its terms will be posted on the website of the Admission Committee of Igor Sikorsky Kyiv Polytechnic Institute at pk.kpi.ua. However, the preliminary information on the course of the admission campaign next year, as well as on the faculties and institutes of the university and the specialties on which it is possible to obtain higher education, was very useful.

Valeriy Mozharovskyi, deputy head of the University's Admissions Committee, added something to Radmila Segol's speech. He told about the selection procedure and answered the questions of the audience.

The deputy chairman of the Admissions Committee has been replaced by the chairman of the military training department of Igor Sikorsky Kyiv Polytechnic Institute, Colonel Oleksiy Tsarenok. His information was devoted to how a military specialty can be obtained at the university and to become an officer of the reserve, and about the directions in which the training is conducted at the department.

Oleksandra Kozyryatska, a representative of the Academic Mobility Department of the University's Department of Educational Studies, told about the opportunities that Igor Sikorsky Kyiv Polytechnic Institute’s students receive for education in exchange programs with foreign higher educational establishments and double degree programs.

This part of the meeting ended with a presentation by Viktoria Popova, head of the professional orientation work with youth. She told guests about the opportunities that students of the Igor Sikorsky Kyiv Polytechnic Institute not only have for professional development, but also for sports, reasonable leisure, development of their artistic skills, etc.

The further work of the Open Doors continued at the faculties, departments and laboratories of the University.