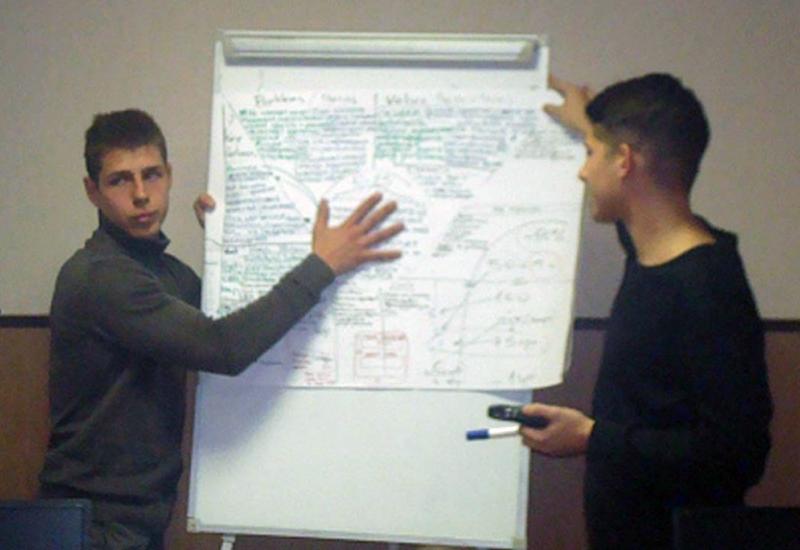 For the scientist from the Faculty of Management and Marketing, the 2017 was a happy year. They became the first project team of the Igor Sikorsky KPI that won in the competition of the Jean Monnet Program with the project: "European business models: transformation, harmonization, and im­plementation in Ukraine".

The toughness of a competitive struggle between the scientists for the victory could be seen even from summarized statistics: within the framework of four contests from 2014 to 2017 in projects of technical assistance in the European Union Erasmus+ from the direction "Jean Monnet Programme ", during which from Ukraine were received 410 projects. From this amount of projects for funding were selected 41 projects (that is 10% from all submitted applications).

The Jean Monnet Programme is an educational programme of the European Union, whose main goals are increasing of knowledge level and increasing of the international community awareness in the matters of European integration by promoting teaching and research activity in this sphere.  There are such major projects in the Jean Monnet Programme: module, project, department, and centres of excellence.

The Jean Monnet module is a short teaching programme (or course) in the study and dissemination of positive experience of the European Union in higher education establishments. Therefore, the aim of the project, developed by the FMM experts, was to study the preferences of European business models and to study the expediency of their implementation in Ukraine. To achieve this goal, the project team planned the realization of a set of tasks:

1) widening and deepening of the knowledge about the EU and the benefits of European business models among the mixed audience (that are students of different ­specialties).

2) promoting changes in the labour market and in the educational space by giving students an extra incentive for employment and self-employment;

The project started on September 1, 2017. The team has paid a huge attention to the project and on the 25th of October project participants have held their first event - a round table on the theme "Academic entrepreneurship and start-up activity of students in conditions of European integration". Among the participants were representatives of different target groups - teachers, researchers, graduate students, and business practicians. It is worthwhile to note the relevance of the online speech of the Polish expert of European training, Dr. Małgorzata Kreglicka (Czestochowa University of Technology), which highlighted the differences in academic entrepreneurship between the EU and Ukraine. The round table meeting was very fruitful. There was a constructive discussion between the participants on academic mobility and start-up activity development of KPI students which, in particular, resulted in the  arrangements on future cooperation between the present representatives of science, business, and students.

Thanks to the active work of the project team, the next event followed on October, 31 - candidate of economics and docent, M. A. Pichugina, has held an open seminar "The European Model of Business Excellence". More than 90 participants were involved in the teamwork, particularly, in the tests resolving, quizzes participation, projects development, evaluation of the business skills attributes etc. The high tempo and dynamics of the event were provided by the knowledgeable use of multimedia. According to the opinion of the organizers, the acquired skills in working with the European model of business excellence will help the participants to understand the approaches of the leading European companies and not only to assess the activities of Ukrainian companies but also to compare their results with the leaders in a competitive market.

On November, 7-16, all who were interested in the European integration topics, were able to participate in the training courses "European Union as a ground-breaking entrepreneur" and "Benchmarking and strategic implementation of the European business model for Ukraine". The main purpose of trainings was the presentation of the EU as an entrepreneur which gives the advantages and prospects for individuals and for society as well. These courses were attended not only by the Igor Sikorsky Kyiv Polytechnic Institute students but also by the students from the Taras Shevchenko National University. The participants received practical skills in the development of their own business models and business projects focused on European competition policy that will allow them to become competitive in the European business market.

The past events have caused a great interest among the students and staff of the university, and a number of events dedicated to the project theme are planned on November- December.

Therefore, we wish the FMM team a successful completion of the project and continued success in the Jean Monnet Programme, and we also encourage other departments to adopt this successful experience, to join the project activities and to win new projects.