The achievements of students of the Department of Engineering Technology 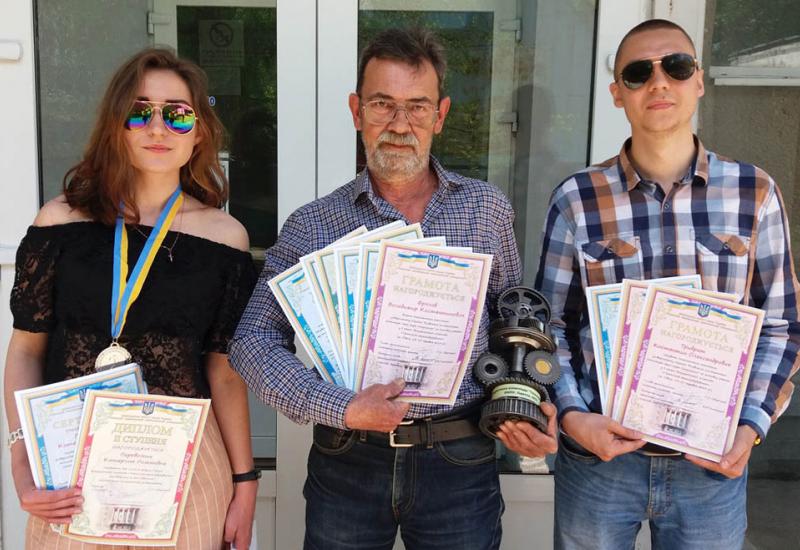 As opposed to the famous proverb about chickens, which are counted in the fall, in the spring it is time to take stock of various student competitions and olympiad.So at the Department of Engineering Technology MMI people do not get tired of welcoming their wards, who bring significant achievements in the victory jar.

On April 24-26, 2019 the final scientific-practical conference of the second round of the All-Ukrainian competition of student scientific works in the specialty "Applied mechanics (engineering technologies )" was held at the Zhytomyr State Technological University. To participate there, the authors of the best works, which were selected on the basis of peer review and open discussion of 47 student's scientific works,which were received to the competition from 24 universities of Ukraine, were invited. Twenty authors of scientific works eight scientific supervisors from fourteen educational institutions came to this event. The Competition Commission of 24 teachers-scientists listened to 18 works, including 4 works  by Skype.

The students of the Department of Engineering Technology MMI are among the winners: Kateryna Perevoznyk is awarded by the second degree diplomas(group MT-51,

Vladyslav Shugai took the third place among more than 30 participants at the 22nd All-Ukrainian Olympiad in the field of Computer aided design and computer simulation in mechanical engineering.The Olympiad was held at National Technical University "Kharkiv Polytechnic Institute" at the Department of Theory and Systems of Automated Design of Mechanisms and Machines.This is one of the most specific olympiads where participants choose one of several tasks and the process of work has a lunch break. Problem solving requires both automated design engineering system and programming skills.

For the results of the Gratitude Olympiad B.S. Vorontsov, student scientific adviser,professor was awarded for for fruitful work in the jury and participation in the organization of the Olympiad) and Igor Sikorsky Kyiv Polytechnic Institute (for participation and assistance in organizing and holding the Olympiad).

According to the results of the second stage of the All-Ukrainian Student Olympiad in the discipline "Programming Machining on CNC machining station", which was attended by 18 students from 8 universities of Ukraine, only 10 of them were allowed to the practical part of CNC Machining - those who showed the highest results in theoretical tour.

The winner of the Olympics was Kostyantyn Trybrat and took the third place in the team standings of Sikorsky Kyiv Polytechnic Institute.

On May 14-17, 2019, the II stage of the All-Ukrainian Student Olympiad "Mechanical Engineering Technology" in the specialty "Applied Mechanics" was held in the Odessa National Polytechnic University. It was attended by 48 students from 22 technical universities of Ukraine.

The first place in the team standings (prize in the photo) was taken by a team of students of the Igor Sikorsky Kyiv Polytechnic Institute Engineering Technology Department consisting of K.Trybrat (gr. MT-81mp),K.Perevoznyk (gr. MT-51) and V.Shugay (gr. MT-51) under the guidance of associate professor V.K.Frolov. K. Perevoznyk won the second place in the individual standings. The All-Ukrainian competition of Master's theses and Diploma projects of specialists and bachelors on specialization "Engineering technology" was held at the same time with the Olympiad.As a result, the diploma of the first degree received the diploma project of the bachelor of V.Artyushenko (gr. MT-41) "Design and technological support of manufacturing of the detail" "Hydraulic turbine lever "(head - assoc. Prof. V.K. Frolov); diploma of the third degree - master's thesis by I.Shtefan (gr. MT-71mp) "Modeling of dynamic phenomena in cutting using ANSYS" (head - Prof. Yu.V. Petrakov); diploma of the first degree - master's thesis of N. Zylyov (gr. MT-61m) "Quality assurance of finishing of the head of the hip endoprosthesis from cobalt-chromium alloy" (head - assoc. Prof. V.K. Frolov);diploma of the first degree - master's thesis of R.O Rudenko (gr. MT-61m) "Optimization of the form of instrumental frames in processing of recess deep holes" (head - assoc. Prof. V.K. Frolov).

Congratulations to our winners, thank for the successful performances and best wishes with further achievements.

Inf. of the TM Department