Joint meeting of the Administration and student assets of the University 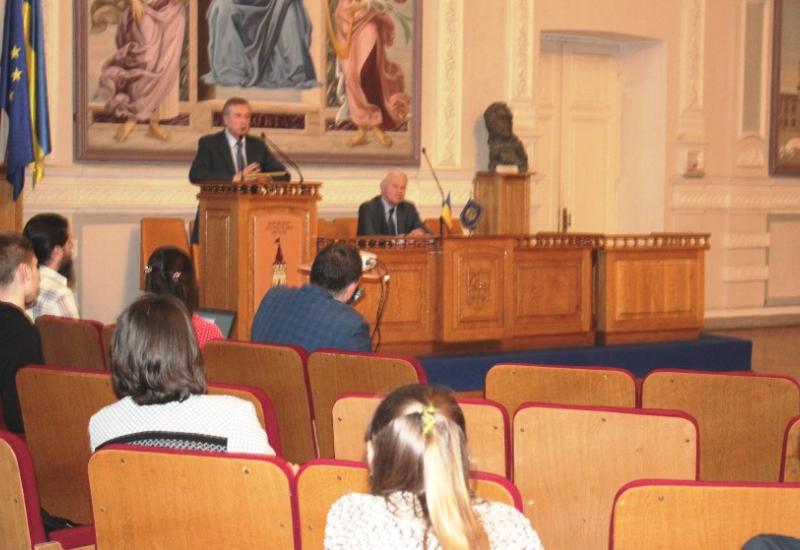 On May, 23, members of administrative council of the university - vice rectors, directors of institutes, deans of faculties and also heads of a number of structural divisions, representatives of administration of the campus and other employees of Igor Sikorsky Kyiv Polytechnic Institute met newly elected heads of student councils of all levels, activists of student government and representatives of student's labour union.

The meeting was held in the Hall of the Academic Council. It began with a brief information from the University's Managing Director Yana Tsymbalenko about the structure and management system of Igor Sikorsky Kyiv Polytechnic Institute. The information is extremely useful: this system is quite complicated, since the university has more than 200 units - educational and scientific, all-university and administrative, - so newly-created student activists should, first of all, be well aware of how it works to establish effective cooperation with it.

Then the moderator of a meeting the first pro-rector of Igor Sikorsky Kyiv Polytechnic Institute Yury Yakimenko gave the word to the new head of student council of the university Daniil Yaremchuk. The head of the student government told the audience about what problems, according to the point of view of the student council, are more important for Igor Sikorsky Kyiv Polytechnic Institute. He divided them into several groups: the issues of maintenance and the state of corps, taking measures for unscrupulous teachers, installing turnstiles, etc.

For each of the issues, that were violated, the audience received information from those heads, who are directly responsible for their decision. A very active part in the discussion was taken by the heads of the Students of the separate faculties and institutes. Questions were addressed directly to the university leaders. However, simply during the discussion it became clear that the overwhelming majority of troubles, which activists said, can and should be eliminated on the ground, that is, in the relevant units. In addition, only talks and indignations in social networks in order to overcome problems, which prevent normal study and work, is not enough - you need have an active position, sometimes make written appeals, sometimes - your own initiative and just work.

In general, the range of issues discussed was very broad. The conversation turned out to be open and frank. Therefore, most of its participants agreed that the meeting was useful, and such measures should be regular.

It is worth noting that this was not just about problems. Oleg Beletsky, chairman of the Young Scientists' Council, cited his own experience, said: "We have a large coefficient of democracy in Igor Sikorsky Kyiv Polytechnic Institute. You will be heard and heard already now. The main thing is that you offer something useful. "

1. To introduce regular meetings of heads of departments / institutes with students' assets of relevant departments and dormitories.

2. To create an information and dialogue system of the university for the increase of effective management and prompt response to the requests of students and employees.

The rector of the university Michael Zgurovsky, who lined meeting results, suggested to include one more point to which all agreed in the decision:

In the photo: the rector of the University Michael Zgurovsky speaks to the meeting participants