The lecture hall named after Kovalka M.P. was opened at IEE 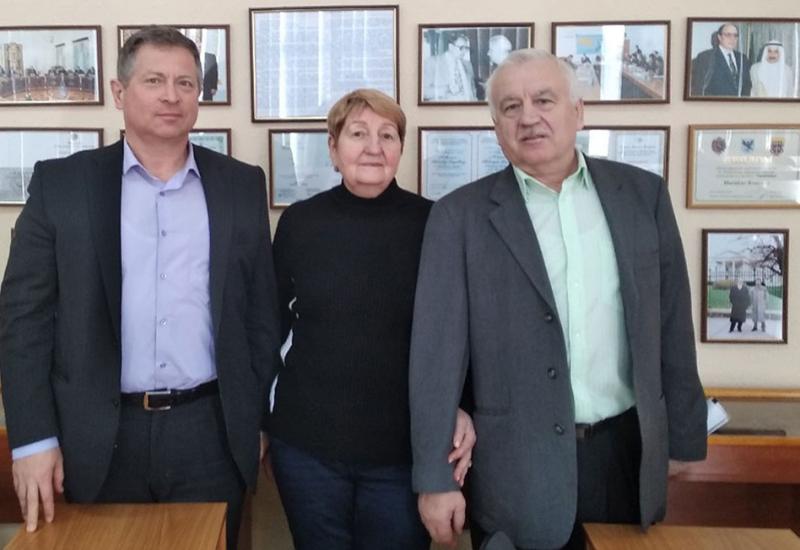 In the Institute of Energy Saving and Energy Management in the solemn atmosphere the lecture hall named after Professor M.P.Kovalka ( an outstanding scientist, specialist in the field of energy, state and state figure, doctor of technical sciences, laureate of the State Prize of Ukraine in science and technology)was opened.

Mykhaylo Petrovych Kovalko played an important role in the establishment of the IEE and the opening of the new specialty "Energy Management" for Ukraine. The formation of the IEE began in 1997 with the approval of the Cabinet of Ministers of Ukraine of the Integrated State Energy Saving Program, developed under the direction of  Kovalka M.P. The IEE was created by a joint order of the State Committee for the Protection of Consumers, headed by Kovalko M.P. at the time, and the Ministry of Education of Ukraine in Igor Sikorsky Kyiv Polytechnic Institute, which was determined by the basic organization for training and retraining of specialists, for raising the skills of specialists, promoting education and training in the field of eco-saving and energy management.

Since 1999 Mykhaylo Petrovych had worked part-time as a professor at the Department of Power Supply at the Institute of Energy Saving and Energy Management of Igor Sikorsky Kyiv Polytechnic Institute, was a member of the specialized academic council for the defense of candidate's theses. He has prepared and taught new courses: "Energy Forecasting and Planning", "Ecological Problems of Energy Use", "Global Problems of Energy and Ecology".

The newly formed audience named after Kovalka M.P. is equipped with modern equipment, so, there is possible to hold scientific discussions, lectures and practical classes. The stands show the life path of Mykhaylo Petrovych, photos tell about important events from the life of a scientist, statesman and poet. Also, a corner with its teaching aids, monographs, and poetry collections is decorated.

Kovalko M.P. is the author of more than 90 publications in scientific journals, monographs on energy conservation and energy efficiency, the formation of the fuel and energy complex of Ukraine, the executor of numerous scientific studies, has 35 inventions. Kovalko M.P. is a laureate of the State Prize of Ukraine in Science and Technology (1999), the Honored Inventor of the USSR (1989) and Ukraine, the Deputy Minister of Industry of Ukraine (1994), the President of the Ukrainian Oil and Gas Academy, honorary professor of Ivano-Frankivsk State Technical University of Oil and Gas, member of the Academy of Mining Sciences.

The profound knowledge of theoretical knowledge, practical experience, analytical mind allowed him to become a specialist and organizer of the energy complex of Ukraine, to be able to see and apply in practice the trends of development not only of individual processes in the industry, but also in general to predict the development of the economy of the entire state. He has always promoted the idea of energy conservation, increasing its own resource base of energy resources, reducing energy dependence on oil and gas imports, and transparency of solutions in the energy sector of Ukraine.

Mykhaylo Petrovych was a man with a wide range of interests, in his character combines vitality and equilibrium, finick and amiability, kind-heartedness and businesslike, pragmatic and romantic. He is a famous poet, songwriter, published over 10 poetry collections. Among them there are poems devoted to the Kiev Polytechnic Institute, students, the process of scientific knowledge.

Colleagues in Ukraine and abroad listened to the opinion of the scientist-practice. He has repeatedly represented our country on an international level, participated in conferences, congresses, symposiums, government and scientific delegations. He was known as a specialist in the field of energy conservation, development and exploitation of oil and gas fields, initiator of the introduction of a number of fundamentally new technological studies and their introduction into production.

We sincerely thank Mykhaylo Petrovych for his significant contribution to the creation of the IEE, the establishment of energy conservation as a priority area of state policy of Ukraine, for his fruitful scientific, pedagogical and creative activities. A manifestation of our respect and gratitude is the audience created in honor of Mykhaylo Petrovych. Honor of his memory lives in our hearts.

Zakladniy O.O, assistant professor of the department of Energy supply