Theater With No Face 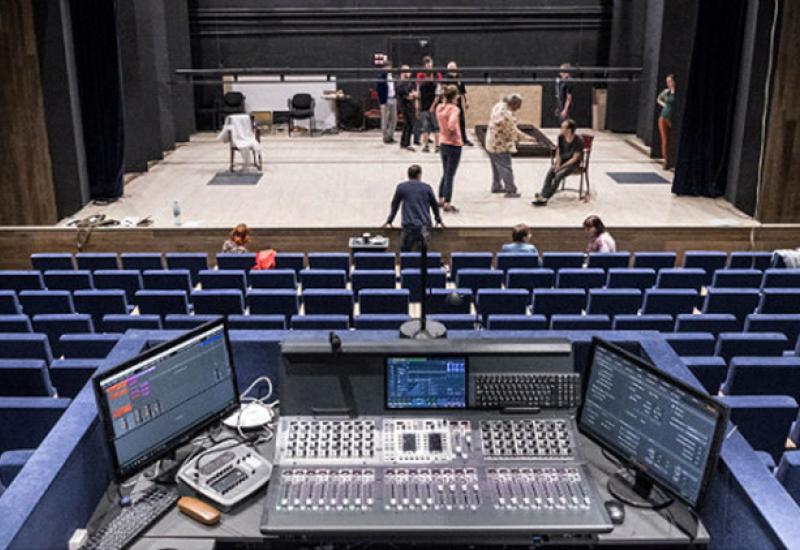 That is how Kyiv tour guides are calling the new theater building on Podil. The modern architecture allows the viewers to enjoy the things that are happening on the stage while not getting distracted by decorations.
The heart of the theater is an ultra-modern scene that rotates, moves up and down and is able to be trans-formed backstage. Stretched cables are everywhere, any kind of light with all colors and intensity from al-most any point can be utilized. The sound operator performs wonders like changing the pitch and tone of voices, creating effects of remoteness, “being there” (presence) and uses point and quadrature sound.
Scenery artists can relax – all kinds of pictures are projected on the back and walls like smart mechanisms of a very high quality create rain, snow, wind, thunder etc. The hall is designed for 200 seats. There is a huge reservoir with 7 tons of water in the basement, in case of fire.
Looks like the architect put his heart and soul into creation of the stage space and the rest of the building made as he pleases. But, according to “Kyiv citizens” opinion, the ability to raise scenes screen-back, (that’s why it is said that the top of the building was distorted), does not justify coffin-like appearances of the building. Yes, the interior space is quiet modern and functional, convenient for actors and audience, and pro-vides seats for people with disabilities, hearing and vision impairments. But what about outside space?
Even the opportunity to invite foreign troupes on tour, with a bunch of technical innovations that can be implemented in the new theatre, does not improve the impression of the theatre-monster, that appeared on Andriyivskiy. And, of course, the sign in plain sight: built with the support…
For the record
Kyiv Academic Drama Theater on Podil was opened in 1987 and located in the historical center of the cap-ital. The building, in which theater operates, needed extensive refurbishing. Construction of new building started in 1996, but was repeatedly frozen due to the lack of funding. In June 2015, Roshen company, under-took the reconstruction that lasted for 21 months and cost 165 million hryvnas.
“Kyiv citizens” considered that the facade of constructed theater was temporary, that new building is un-derneath it. When it became clear that this is the reconstructed theater there was a rise of considerable indig-nation due to the fact that the construction did not fit into the ancient architecture of the XIX-early XX cen-tury on Andriyivskyy descent. However, in