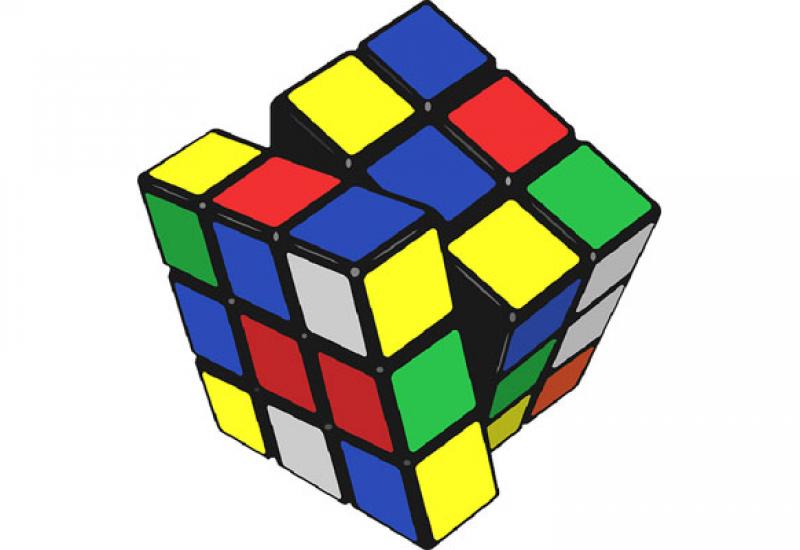 Every year on the third Saturday of September the Ukrainian celebrate the Day of the inventor and innovator. It is greatly connected with our university as ingenuity and innovative activity is an integral part of every engineer's life. It is worth telling that inventions could be different. Among them there are those that change the whole course of history, those which ease people's daily routine and those that were created to make our lives more interesting.  The last could certainly include a brain-teaser cube which literally conquered the world in a few years. It honorably has the name of its developer in spite of the fact that soon will be fifty years since this intellectual «toy» appeared; but it still attracts more and more fans of reasonable leisure. I think you have guessed that I mean a Rubik's cube.

Somehow in the early 1980s, when I was studying in NTU KPI, my brother brought in our house a very popular and at the same time so rarely for us puzzle. It was a Rubik's cube. Having taken that cube for the first time I started to twist it and even did not notice that it got dark outside. What is more, when I stopped playing with it there was almost dawn. To be honest, during the night of persistent "torsion" I was able to collect only two layers of traditional three-layer cube. My further attempts appeared to be in vain. Only after publishing in scholarly and popular magazine «The Life and Science», that had a three million circulation, a series of articles «To make a cube? It is not difficult!» and «Creating a catalogue of cube rotations», I somehow understood how to deal with Ernier Rubik’s (Hungarian civil engineer) creation. So it was how I got acquainted with such an amazing puzzle and which continues for more than four decades (that well-competed real copy of the cube I still make up almost every single day)…

On January 30, 1975, Rubik filed an application to the Hungarian Patent Office for an invention which he called "Terbeli logikai jatek" ("Logic toy"), and at the last day of December 1977 he obtained patent №170062. Also, at the end of that year, the first industrial batch of a colorful miracle was released. It went on sale at the Budapest toy store and immediately found its fans. At the beginning of 1980 the puzzle was presented at toy fairs in London, Paris, Nuremberg and New York and eventually, in a year, it appeared in USSR too.

Classic Rubik’s Cube is a plastic cube measuring 3x3x3 that consists of some visible elements which look like 26 small cubes with 54 colored square label faces. The faces of a large cube are able to rotate relative to the three internal axes of it. Each of the six faces consists of nine squares and it is painted in one of the six colors. In a common version of the cube, the colors of the opposite sides are: red – orange, white – yellow, blue – green (though firstly the inventor considered other design options, in particular using numbers, as well as images of animals or fruit). The rotating faces allow you to organize colored labels in many ways. The number of possible combinations is 43 252 003 274 489 856 000 (or more than forty quintillions!)

A player’s task is to "solve the Rubik's Cube". This means he or she should turn the faces in such a way to return it to its original state, when each of the faces consists of labels of the same color. Despite amateurs, there are almost professionals (they are known as speed cubers). They often take part in the annual European and World Championships (the first International Rubik's Cube Championship was held in Budapest on June 5, 1982). It is worth telling that almost every participant of these competitions is able to cope with the compilation in a few seconds! It has also been proven that to make a cube of any initial arrangement of labels, 20 moves are enough (It will be good to know only which ones!).

There are other puzzles similar to the Rubik's cube, which take the form of a tetrahedron (or just a pyramid which was invented even earlier than a cube), an octahedron, a dodecahedron, a rhombic dodecahedron, as well as some others. Three decades later after his main invention, Ernier Rubik created a new puzzle – the Rubik ball, which is made in the form of three transparent spheres located in each other, in the center of which there are six colorful balls that need to be brought out.

It would seem that such a simple thing as drafting a multi-colored cube has no harm to anyone. However, with the speediness of the toy, more and more patients began to visit doctors with various problems acquired as a result of "communicating" with a cube. Among them was headache, insomnia, wrists’ pain. Some who particularly admired the puzzle ended up in hospitals with mental disorders. Even a new term appeared in medicine – «Rubik's Cube Addiction Syndrome». There were also some cases when people, desperate for the opportunity to make an unfortunate cube, secretly re-glued color labels and then proudly showed the "solved" puzzle to shocked friends.

... With the development of computer technologies, a huge number of new games and puzzles have appeared. Now even Ernier Rubik himself is involved in the development of video games. However, only few of these new intellectual amusements can have such a glory as this seemingly simple multi-colored cube at the end of the last millennium. There are more than 350 million copies of cubes all around the world that is a great number for just a simple toy!