Victor - means the winner or recipe for success on champion 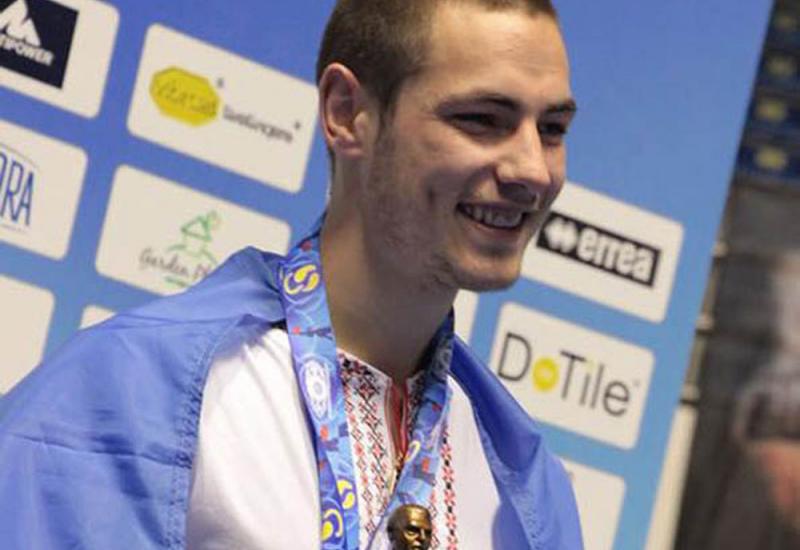 Meet the champion of Europe among juniors and men, world champion among juniors, students and women in weight lifting, fourth year student of the Faculty of Biomedical Engineering Viktor Ivakhnenko.

The list ranks Victor shows that despite his young age - he was only twenty years - he has achieved a lot. So edition of "Kyiv Polytechnic" asked him to share with readers their own recipes for success.

But the conversation with Mr. Ivakhnenko in wording began not with his victories, and from the weight sport and its history. Victor told enthusiastically that the roots of fun power reaches of ancient Greece, and survived numerous pictures and sculptures of ancient athletes while performing various exercises with stone objects, like modern weights.

Today the sport has clearly defined rules. Athletes competing in the amount rises weights for 10 minutes in two exercises - snatch and jerk. Snatch - is lifting weights at first one by one, then the second hand one motion. Shock - two weights pushed on his chest and fixed on straightened arms. Athletes also compete for the championship in push "long cycle": two weights thrown on his chest, then pushed up, sink to his chest, then down without touching the platform, and then everything is repeated again. International competitions are held with weights weighing 24 and 32 kg. Clearly, weight lifting sessions educate not only fair power, but power endurance, perseverance, ability to tolerate, expect power and much more. From these champions as required, probably in double quantities for a high rank should not only win, but also in the highly competitive defend. It is only to stop and catch the best you have to have. However, this is true for any sport. But is only sport ...

As for Victor, then his ascent to the heights of sportsmanship he began in his native village of Makeyevka Belotserkovsky district, Kyiv region. There he was born there in nine years, began to exercise his father Vasily Ivakhnenko. And under the guidance of coach Eugene Svirsky eleven years began to play sports. Of course, no first weights were not, and were sports, jogging, etc. - what is called general physical preparation. Only thirteen he tried to "iron" and not fall apart with him to this day. Perhaps, he says, is good.

However, to achieve high results were not shown.

Not so long ago, in 2014, Victor was extremely pleased by following the championship Kyiv rate of the first category in shock "long cycle". But to dwell on this and he was not going to immediately planned soon and fulfill the norm Candidate Master of Sports. He succeeded quite quickly, and at prestigious international competitions - the World Cup among the students in Lyon (France), where he not only became a candidate for master of sports, but finished fourth. The next year in Hungary, in the symbolic name of Pécs (symbolic that in the days of the competition there was extreme heat - up to 39 degrees), it even became a double world champion - among students and juniors! And then gone ...

The most fruitful for the victory was for Victor Ivakhnenko year 2016. He first won the championship of Ukraine among juniors and men, then in Porto (Portugal) became European champion among men and junior world champion among students (all these competitions were held in parallel, with the results of the European Championship for juniors shall be the "adult" championship). At the end of October in the Italian city of Turin won the world title at the push of a long cycle in the weight category up to 70 kg among juniors and adults! Victor pushed weights 32 kg weight 43 times. Participation in this tournament were athletes from 27 countries.

By the way, Ukrainian artists ordeal serious weight lifting is not only the competition, but even visit them. After all, unlike the extremely limited number of "hyped" sports such as, say, football and boxing, this type of officials prefer to ignore. And even the most significant achievements of Ukrainian athletes at the most prestigious world tournaments (at the world championship in Turin, our team won the overall second place team, and in the long run - first), no noticeable reaction from those who are responsible for the development of sports in the country, not cause. So go our athletes to championships and cup meetings only at their own expense or at the expense of sponsors. As well independently and equip yourslef. "In years past I mostly went to the competition with their own funds - says Victor. - I worked part where someone borrowed money, helped and parents. Go to the championship of Europe in Portugal helped me to entrepreneurs - representative of" Lear "Viktor Petrovich Pofatnyy and representative of JSC "Poppies" Vitaly Nikolaevich Govorun. The trip to the world Cup I have to pay for as impossible had - this was required at least 470 euros - and sought that amount where he could. a little help our university, but the possibilities in this regard him as in small state university. So had to revert to Victor Petrovich and Vitaliy Nikolayevich. Only with their help and I was able to go to the championship. " And we add dignity to present state, which, no matter how annoying is recognized on a spit ...

In all motivated victory - constant hard work. One could write a "very difficult" but seeing how he talks about during training and competitions burning eyes, you know that it has become Ivakhnenko. Therefore, although exhausting, but at the same time one that brings real pleasure.

Note that seriously, or as they say today, professionally, he began to exercise only when he entered the KPI to the Faculty of Biomedical Engineering. His specialty - biosafety and human health, therefore suited to training consciously and with understanding the mechanisms of increasing the special qualities required for his sport. However, the experience and advice of their trainers listen. It is generally very respectful attitude to each of the mentors who helped him reach the heights of sportsmanship: Svirs¬koho Eugene, who was the first in its sports biography Anatoly Krylov, who coached him in the hall of the sports complex named CPI. Igor Sikorsky, and Yuri Shcherbina - coach under whom engaged today (who, incidentally, now heads the International Federation of weight lifting and weight lifting Federation Ukraine).

"I train four times a week. Training lasts three hours - reveals the secrets of his victory Ivakhnenko. - In the run longer. Then slightly different set of exercises it includes more specialized and unnecessary - removed ... During one workout raise minimum up to 20 tons, and it is much more. "

The habit does not spare himself and did not complain even developed an house. According to Victor, a teenager returning from school, he said, despite the fatigue, always took up some things (in the village there is work for all members of the family) and lessons, then fled to the exercise, then engaged in homework. Time to rest does not give. Do not give now: after school - training, then prepare for tomorrow's pairs. When preparing for the European Championship before workouts also run to work, as had fake ... As he said, constantly moving, because should make early session, to earn money to participate in the championship, and of course, good to prepare for it.

Asked whether enough time for anything other than education and training, Victor replied: "Typically enough, especially after the competition, then you can chat with friends and relax a bit. Now, in preparation for the session, a little more difficult but for the rest you can find the time. "

On the preparations for the session, Victor recalls chance: it relates to teaching seriously, and therefore the average score in his rather high - 4.5 - 4.6. After trying not to miss classes, and even when you have to leave the competition - all out beforehand owned. Teachers are always met, especially as evidence that he always brings to Kyiv medals and diplomas.

So much success secrets Victor has not. You just need to strive to achieve in favorite business success to be constantly in motion and believe in yourself. Such as prescription champion.