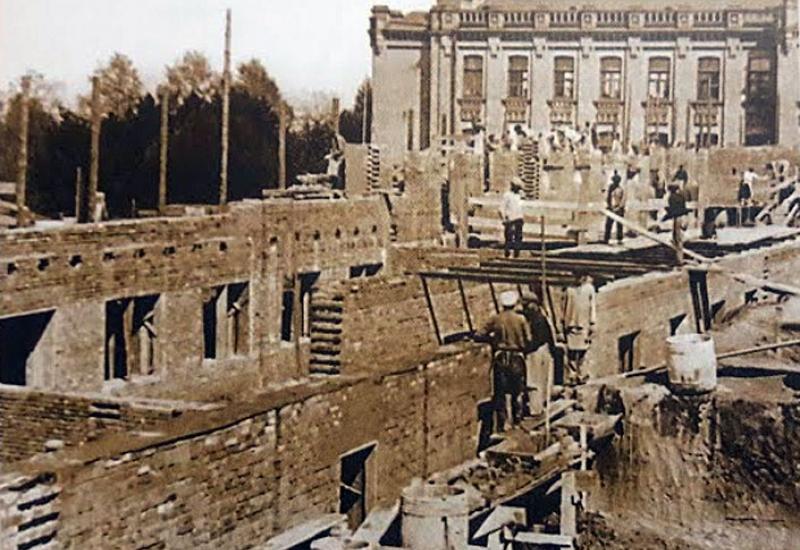 On the left, the bust of four Ukrainian scientists. Among them are a bust of the academician of the USSR (1945), Creator of the first in continental Europe computer Sergiy Oleksievych Lebedev (2 November 1902-3 July 1974).

He is the founder of the scientific school of computer technology in Ukraine, which became a major in the former USSR. According to their results, it competed successfully with the American company IBM. Under his leadership, was created and submitted for serial production of 15 types of high-performance, complex at the time of electronic computing machines (ECM). Each of them was more faster, more efficient, reliable and user-friendly than the previous one.

In may 1946, the S. O. Lebedev was appointed Director of the energy Institute of the Academy of Sciences of the Ukrainian SSR in Kiev. In 1947 after the division of this Institute, he became Director of the Institute of electrical engineering Academy of Sciences of the USSR (since 1963 – the Institute of electrodynamics). The same year this Institute was created the laboratory of modeling and computing. In the Kiev suburb of Feofania academician Lebedev led the development of the first in the Soviet Union and on the European continent computing machine SECM (Rus. Small electronic calculating machine). During 1948-1949 he developed the basic principles of such machines. It was further decided to establish a working model of the machine followed by its conversion to small electronic calculating machine. At the end of 1950 set up the layout was finished.

In 1950, Sergiy Lebedev received an invitation to work in the Institute of precision mechanics and computer engineering (IPMCE), USSR Academy of Sciences in Moscow. There he oversaw the creation of the electronic computer, called the BESM-1 (Rus. Large, or high-speed electron-counting machine). After putting the BESM-1 in 1952 academician Lebedev headed IPMCE (later the institution received his name).

Created on the basis of the Kiev Soviet mainframe computing machine (BESM, "Strila", "Minsk", "Ural", "Dnipro", "Mur", M-20, M-220 and others) provided during the period of nuclear confrontation of achieving parity between the US and the USSR.

Report S. Lebedev in Darmstadt about the success of the Kiev scientists in 1956 found that Ukrainian computer correspond to the level of the U.S. and are the fastest in Europe.

Academician Lebedev strongly opposed to the fact that in 1970-ies in the USSR began copying the American system, the IBM 360 (in the Soviet version, it was called EU ECM). He believed that scientific and engineering advances should be used for their own development and that the policy of the catching will not justify themselves...

Following the bust commemorates the first Ukrainian doctor of Geology (1911), Professor (1914), one of 12 first academicians of Ukrainian Academy of Sciences (1918), academician of the Belarusian Academy of Sciences (1928) Pavel Apollonovich Tutkovsky (1 Mar 1858 – 3 Jun 1930). The scientist studied the geological past of the Earth and paleontology. His legacy includes more than a thousand scientific papers. Very much he has done for the development of the Ukrainian scientific terminology in the field of natural Sciences.

P. A. Tutkovsky – founder of the geological scientific schools in Ukraine. A specialist in the field of regional Geology, Mineralogy, geomorphology, paleontology . He was also one of the founders of the Ukrainian Academy of Sciences, the first geologist among its members (since 1918) and 1919 – the Chairman of the physico-mathematical Department of UAN.

The first in the former Russian Empire Pavel Tutkovsky began to study fossil mcrophone. His work received recognition of domestic and foreign experts.

A powerful impetus for the development he created a scientific school was the organization in 1926 of the Ukrainian research Institute of Geology, which he led, and built in 1927 in Kiev Geological Museum at the Institute of geological Sciences and ONE in Kiev. During these years he managed to unite geologists, who for decades has made an extraordinary contribution to the development of geological Sciences in Ukraine.

Thanks to their solid professional knowledge of academician Tutkovsky in the end of XIX century the first in Ukraine environmental activities. In the circle of his interests included the issues of conservation of forest and fish diversity, protection of birds, the greening of cities, disposal of hazardous wastes from industrial enterprises. He was concerned with the fight against forest fires, strengthening of ravines, the fate of the Kiev royal gardens and zoo. In 1918, P. A. Tutkovsky for the first time in Ukraine has affected the issue of the protection of geological monuments. Then he became head of the environmental Commission in the Department of protection of monuments of nature under the Ministry of Land Affairs of the Ukrainian people's Republic. However, through the permanent change of power the board but this did not last long, but managed to overturn the felling of Holoseievski forest, and prepare the exhibits for the Museum of nature protection.

In 1919 he headed the Agricultural Committee, which did a lot for conservation, in particular conservation reserves Askania-Nova, Kaniv and Koncha-Zaspa.
In April 1920 at a meeting of the environmental Department of the Ukrainian scientific society in Kiev he proposed categories of geologic objects to be protected, among them – and amber deposits...
V. Vernadsky called P. Tutkovsky, the best expert in inorganic nature of Ukraine.