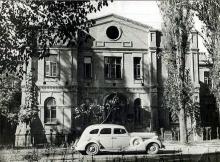 Tashkent Institute was located on the base of Central Asian Industrial Institute (SAII) and began to exist as an independent institution. In its structure 4 faculty and 12 departments functioned, where 31 students of the second up to the fifth course studied. It was planned to begin training in September and conduct classes primarily in the evening hours, part of the departments and the students were transferred to the SAII. However, in August 1941 it was decided to merge Kiev and Central Asian Industrial Institute. On the basis of the Kiev Industrial Institute as part SAII new faculties (mechanical and special) were formed, Energy and Chemical Technology departments were expanded, it was began further training in 10 specialties. 10 professors, 31 associate professor, 18 assistants, 10 graduate students, 515 students were included in CAII [5, p. 3]. This association contributed to the preparation of the engineering staff in many specialties.

The training of specialists in heat-and boiler units, industrial use of thermal energy were carried out on the departments, headed by Associate Professor B.P. Taranov and V.I. Tolubinsky. On the Chemical Engineering Department specialists in electrochemical production technology and organic dyes, process equipment pulp and paper production were prepared at the department, managed by prof. V.F. Bobrov, associate S.G. Riklis and I.B. Barmashenko (the latter soon became the dean of the faculty). Created as part of CAII mechanical faculty trained specialists in mechanical engineering and tool case, foundry and chemical engineering. The faculty was headed by V.J. Bershov and special departments were headed by Professors S.S.Rudnik and E.M. Haimovich, associate P.G. Berezin, S.I. Citkin. New special department, headed by prof. SI Tetelbaum, began training in military radio technics.

Work in Tashkent in wartime was not easy for the Institute staff, as the learning process had to be combined with the implementation of urgent economic work in factories, construction sites, fields of Uzbekistan.

Kiev team of teachers had to face serious gaps in the educational process in SAII. Wartime difficulties complicate the situation. Many students did not follow the curriculum. N 1942/43 the plan to prepare experts was made by only 69%. The distribution of specialists was met with difficulties also, only slightly more than a third of graduates were sent in 1943 to the scheduled jobs. After the change of leadership institute the requirements for the implementation of curricula were increased, which gave positive results. N 1943/44 number of students who are fully accounted for the winter session comparing with the previous year increased from 44 to 70%, and the implementation of the plan of experts has reached 89% [6, p. 39]. The Kiev institute staff made a contribution to the training of engineers for the national economy and national defense. During the 1942-1944 they were trained more than 120 people [7, p. 1].

Kiev scientists and engineers completed in Tashkent many important scientific and technical work for the national economy and national defense, have made a significant contribution to the economy of Uzbekistan and other Central Asian republics, thereby consolidating technical and economic potential of the whole country.

Under the guidance of prof. VE Vasiliev it was created in SAII public offices for the design of the first steel plant in Uzbekistan. Active participation in the design and construction of the plant was taken by the teachers M.A. Kichigin, E.M. Haimovich, V.J. Bershov, K.I. Vashenko, M.F. Savin, V.I. Tolubinsky and other staff of mechanical and energy departments. First factory was started already in 1944, Uzbekistan has received its own metallurgical base.

For the needs of engineering doctor of technical sciences, KI Vashenko developed and introduced into production methods to improve the quality of pig iron using scarce materials. Candidate. tehn. Sciences P.G. Berezin was involved in improving the technology of casting. He has developed and implemented at defense plants Uzbekistan new technology to improve the performance of foundries. Prof. S.S. Rudnik led in the enterprises of the Republic works to improve the technology of metal cutting. Prof. E.M. Haimovich completed in Tashkent thorough work on the hydraulic drive machine tools, together with Assoc. MF Savin he performed a number of tasks on production technology defense products, prof. I.D. Finerman worked on automation control engineering. Complex tasks of a defensive nature were performed by the Assoc. I.K. Martsinevsky and engineer A.Y. Golyan- Nikolsky. The energy department of prof. AV Orlovsky and Assoc. AE Khodorov drafted a power plant for the Uch-Kurgan region of Uzbekistan. Together with prof. I.I.Greben they had pre-commissioning testing of electrical equipment Ak-Tepenskoi HPP. Under the guidance of prof. M.M. Vasiliev it was examined electrical facilities of large enterprises in Uzbekistan, works on a higher power motors. Professors I.I.Greben, P.V. Okulov, associate A.B. Budnitskii, E.P. Gizila provided scientific and technical assistance to many companies in the field of energy saving.

Prof. N.A. Kichigin and Assoc. V.I. Tolubinsky engaged in the reconstruction of heat economy of power in Uzbekistan, increased trouble-free operation and efficiency of the Chirchik and Kuvasay HPP Fergana CHP. Under the guidance of professors N.A. Kichigin, A.V. Orlovsky they have developed new types of steam turbines of medium and low capacity for recovery of energy facilities. Docents B.P. Taranov M.A. Baranowski, S.Y. Keller and engineer A.D. Berkut provided technical assistance to enterprises in Uzbekistan in the design and installation of thermal units.

The team of scientists, led by prof. F.F. Bobrov, contributed to the construction of a new pulp plant at the paper mill in Tashkent, Assoc. I.L. Gurovich investigated refractory clay of Angrensky field and has developed terms of reference for the creation of the first in Uzbekistan mechanized glass factory.

Teachers and researchers under the direction of a special faculty prof. S.I. Tetelbaum on behalf of the People's Commissariat of Defense of the USSR in 1942-1943 have developed a new model of electronic weapons, received high praise from military experts. Since 1943 the tasks of Defense were performed by lecturers N.P. Vollerner, V.A. Zmorovich, M.V. Laufer, engineers Y.G. Loew, A.T. Yura et al. [1, p. 2].

Many scientific and technical work performed by Kiev scientists and engineers in Tashkent were awarded by the government, 16 employees of the Institute were awarded orders, 15 were awarded by the signs of the Presidium of the Supreme Soviet of the Uzbek SSR {8, p. 6]. Due to the shortage of specialists in the enterprises of Tashkent, some faculty and staff of the university combined work in the institute and in the workplace. This, in particular, associate M.P. Bondar, I.V. Greenberg, M.F. Savin, 3.D. Hristich. Students of the Institute took an active part in the national economy works. The fall of 1941, led by technical experts they carried out the installation of equipment of evacuated to Tashkent enterprises, with cotton harvest worked in the fields, constructed North Tashkent irrigation canal Salarsku and Ak-Tepensku HPP [7, p. 10]. In heavy military conditions the personal of the evacuated institute selflessly trained engineers, provided assistance to the front and rear.