The results of admission to the university in 2016 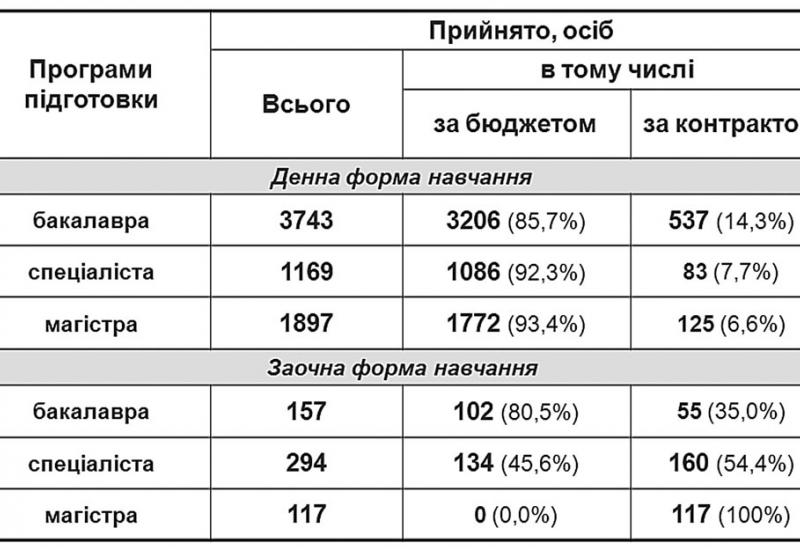 This year’s admission of students significantly differed from the reception of the past years. Firstly, this year instead of fixed amounts of state order for entering on the education level "Bachelor" on the basis of complete secondary education has been established the maximum volumes of the state in order for specialties. Secondly, entrants have been taken according to the new list of specialties in this year. Students became 41, while the previous five years was 121. However, it was more than 150 specializations. Thirdly, Ministry of Education established a single competition and identified only a passing score for entry to the specialties across the country. Fourth, entrants can submit 15 applications for five specialties in this year. As a consequence, the competition according to statements in our university constituted 15,4 whereas in 2012-2014 there were 7-8.

On the 1st course 3743 persons are enrolled (3206 - the budget form of education, 537 - contract form of education) in this year. This is about the same as last year (3315 and 528 respectively), but much less than in 2012-2014, when the first course is entered more than 4,000 students. 32.4% of enrolled - graduates of pre-university training systems (SPD). It is the entrants who consciously choose our university for nearly a year before the entry, who studied a few month extra. They are interested in receiving the higher education in KPI, and they are well prepared. Unfortunately, not all faculties use SPD properly for search of "the" entrant: if among first-year students of FPM and AISA respectively 121 and 144 - graduates of SPD (on FICT even 246), that is faculties where less than ten listeners of SPD have entered (diagram 1).

The greatest tender according to the submitted applications on places of the state order was on such specialties: "Science of Law" - 109 applications in place, "Journalism" - 91.9 "Philology" - 80.6 "Marketing" - 51.9 "Economics" - 46.5 "Sociology" - 37.6. It corresponds to the general tendency across Ukraine: youth chooses such - "fashion" in the last decades scope of future activities.

Among technical specialties the greatest tender according to the submitted applications on places of the state order was on such specialties: "Software Engineering" - 28.3 "Сyber Security" - 21.3 "Computer Engineering - 17.2" Biotechnology and Bioengineering "- 17.0" Biomedical engineering "- 16.8. If the first three positions were taken by specialties, traditionally subsequent are in demand, then two - rather new for KPI. It is possible to make a conclusion that the decision on creation of the relevant faculties connected with biotechnologies and medicine made in due time was correct.

Unfortunately, the small competition was on specialties which is basic for our country - "Power engineering" (3,69), "Branch mechanical engineering" (3,65), "Ecology" (3,1). Besides entrants often noted such specialties as the least priority. The shortage on such specialties turned out to be consequence. At the same time these industries are very important for Ukraine today, and the fact that they aren't in demand, is a problem which should be solved not at the level of university, but also the state.

In this year, the only competition was on the faculty and the passing score was determined by the Ministry of Education, which depends on the competition situation in certain specialties across the country. The highest passing scores (171.4 - 158.8) is set for the following ten specialties (of those, which is preparation of our University): "Germanic languages and literature", "Sociology", "Biotechnology and Bioengineering", "Right" "Romance languages and literature", "Marketing", "Management", "software Engineering", "Business", "Biomedical Engineering". As we see, among them - only three technical.

Our university hasn't pursued the number of entrants: for one of profile objects it has been established the minimum point for participation in competitive selection 140, and also left an obligatory competitive subject physics. Other universities often laid down conditions: "physics or foreign language", "physics or foreign language, or history". Despite it, our university has taken the seventh place among 150 higher education institutions of Ukraine on the level of implementation of the state order.

This year in comparison with the past, the number of the students accepted in a magistracy - from 1237 to 1897 has significantly grown up. It has occurred thanks to growth of the state order. This year reception on the educational and qualification expert level - 1169 people is last time carried out. Next year reception will be only in a magistracy. It should be noted that this year 14% of masters - bachelors from other universities.

The general results of reception it is presented in the table.

Results of an introductory campaign shall become a subject of the detailed analysis in educational divisions of university by results of which the director of institutes, deans of faculties, managers of departments shall develop offers for providing the contingent of students, including optimization of specializations and structure of divisions. For the purpose of quality assurance and the number of entrants all faculties, institutes and departments have to participate in professional orientation works in average educational institutions of all types and regions. It is necessary to expand system of pre-university preparation, having included in it all faculties and institutes. It is necessary to strengthen a cooperation with Small academy of Sciences according to the Future of Ukraine program, to make active the organization and holding the Olympic Games, exhibitions, creative tenders among school students, to participate in creation of the centers scientific техничнои youth. Besides, neobkhodimono to develop offers to Regulations of Admission in university in 2017 and the recommendation about the organization of educational process at university, in particular about opportunities of training in educational programs.

According to the materials of the report by first pro-rector Y.I. Yakimenko at a meeting of the Academic Council of NTUU ‘Igor Sikorsky Kyiv Polytechnic Institute’ 5.09.2016