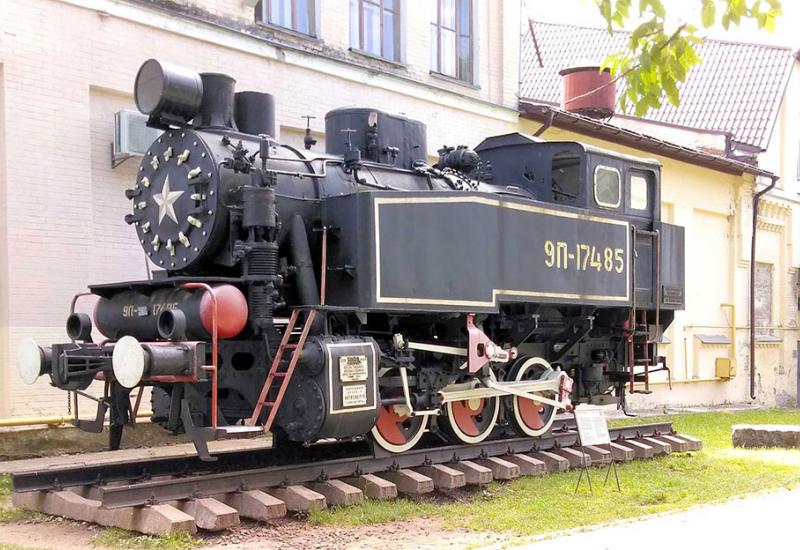 One of the well-known attractions of the Igor Sikorsky Kyiv Polytechnic Institute campus is the tank engine 9P. It is an open-air exhibit of the State Polytechnic Museum. It became recognizable not only because it is located in a popular place of rest - next to the open-air pump room and Museum Square. It is also the first massive exhibit of the State Polytechnic Museum of Igor Sikorsky Kyiv Polytechnic Institute. Therefore, many visitors have seen it. The tank engine 9P was donated to the University in 2001 when the museum was only three years old.

The history of such engines is fascinating.

As early as the end of the 19th century, when the railway network and the proliferation of steam locomotives for various works expanded, it became clear that such powerful machines could not do some cargo transportation. Factories, mills, and metallurgical enterprises did not require high speed and powerful machines.  On the other hand, there was a need to move with frequent stops, on curves with a small radius, etc.

In the Russian Empire, the first shunting tank engine appeared in the 70's years of the 19 century. Their feature was the lack of a tender - a car with a supply of water and coal. Tanks (so-called tanks) with water and fuel were on the locomotive, hence the name – “tank engine”.

The rapid development of industry in the '30s of the twentieth century has identified a great need for a powerful tank engine for helping at metallurgical plants. In 1934-1935, the Central Locomotive Design Bureau of the People's Commissariat of Heavy Industry developed three tank engine projects. The best was the 9P one with an axial formula of 0-3-0 and a towing weight of 45 tons. In 1936, the Kolomna Locomotive Works built the first 55 engines of the 9P series.

The engine had a two-cylinder single-expansion steam engine. To simplify production, the left and right cylinders were the same. Pistons and cylinders are cast iron. Details of the crank mechanism were subjected to cementation and high-frequency hardening. To reduce the turning ambit, the middle axle wheels did not have flanges. It allowed them to fit into the curve with a radius of only 40 m. The maximum speed was only 35 km/h.  The transportation of goods through the territories of plants or for shunting work at hub stations did not require more.

In 1939, the Kolomna Locomotive Works made many changes to the design of the 9P. The developers increased the volume of water tanks from 5 to 6.5 m3 (located on the sides of the boiler), installed a steam dryer, installed electric lighting. They also changed the design of the booth and the coal box behind it. The boiler became welded. Axle bearings began to be produced of steel with lead bronze surfacing instead of bronze. The engine 9P became the basis for a fireless (i.e., in which there was no furnace) locomotive. The boiler was used as a steam accumulator. It was filled with steam from another special boiler. Such a locomotive worked on explosive objects and in explosive conditions.

The steam locomotive was popularly nicknamed “Klop” (“Bug”). A total of 2,900 such locomotives of various modifications were manufactured at various enterprises. 9P was used almost throughout the USSR at mines, mills, railway stations. 9p could work on coal, oil, peat, firewood. The engine is famous for its reliability, simplicity,  and efficiency. No wonder the last working engine in Ukraine (meaning not entertaining “pokatushki”, but hard work) was exactly 9P. It worked at one of the hub stations of the railway in Kirovograd even at the beginning of the 21 century!

In the USSR, the 9P engine is the most perfect and mass-produced industrial locomotive. In general, the country stopped producing engines in 1957 when it started to produce diesel locomotives. However, due to the specifics of these machines, they are still indispensable in some regions and countries. While the operating height increases, the locomotive power increases, in contrast to the diesel locomotive. Therefore, they work on railways in the highlands (Chile, Peru, India, China). Today, about 35 locomotives of the 9P series have survived in museums worldwide as monument locomotives. In Ukraine, there are 8.

Our locomotive monument is a vivid illustration of one of the stages of development of railway equipment. At the same time, it is a reminder that Igor Sikorsky Kyiv Polytechnic Institute has significant achievements in introducing and distributing railways and developing railway equipment. This information needs more detail.

In 1930, a separate Institute of Railway Engineers was established based on the Faculty of Railway Engineers of the Igor Sikorsky Kyiv Polytechnic Institute. The locomotive was manufactured in 1954 by the Murom plant. The engine served in 1954-1965 for shunting operations at the Darnytsia Thermal Power Station. From 1965 to 1974 - at the Kyiv Thermal Power Plant #3 “Kyivenerho”. After a long parking lot, it has been repaired and given to the museum. Students of the Faculty of Heat and Power Engineering of Igor Sikorsky Kyiv Polytechnic Institute took over the patronage of the tank engine. They regularly repaint and restore it after acts of vandalism, which, unfortunately, sometimes happen.