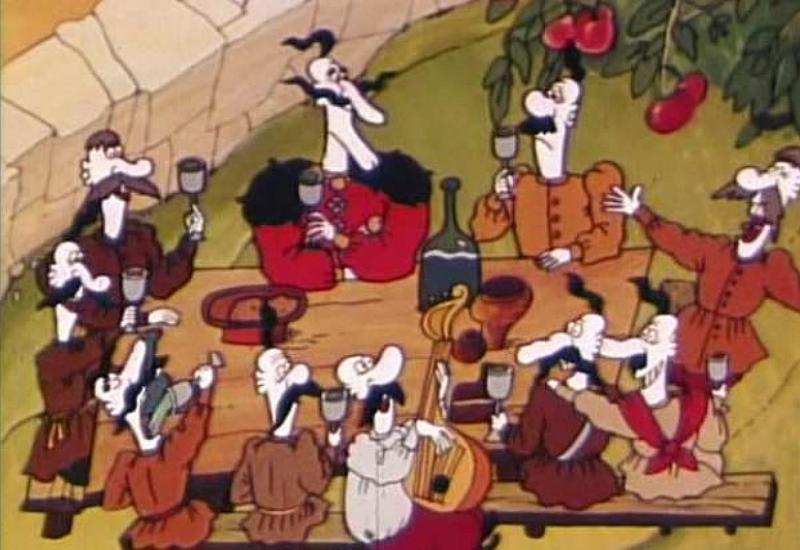 1798 year is remarkable in Ukrainian culture. That year the "Aeneid" Ivan Petrovich Kotlyarevsky (the first three parts) was published in St.Petersburg, from which begins a new era in the history of Ukrainian literature and language. "The 1798 year, a year of" Aeneid ", was turning a historic date in the development of Ukrainian language, because it was the cornerstone" (I. Ohienko).

"Aeneid" Kotlyarevsky was a purely national product. The ordinary people are the characters of it. "Trojan army, led by " Aeneas " are the representatives of the Ukrainian people. These are people of exceptional care, the flesh of the mighty, able to bear the brunt of the mountain. When they start to fight, and they come to battle willingly, it is only heard crunch of broken teeth, shouting and swearing - swearing targets in various stages of word combinations. But these "charlatans", "hartsyzyaky", "hooligans", "drunkards" are at the same time, knights and heroes. All his poem Kotliarevsky demonstrated extraordinary strength and will of the people to life. And it was not his romantic notions of the native people - he saw that power in villages and towns, on the battlefield, in the images created by the national genius. Ukrainian people in the ancient poem act under pseudonyms. But it is enough to look at each of the hero of the ancient Roman name, and in front of us, "as beets, red, fist fighter, terrible and true Stepniak" - Cossack, one of those Kotliarevsky knew not only of folklore, but also personally. Despite burlesque image the poem was not so "heroic-comic" as heroic "(O.Biletsky). 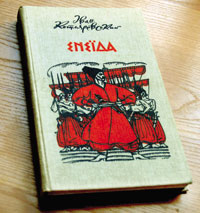 In the images of Trojans Kotliarevsky describes the power of the Ukrainian people, brave Cossacks, whose heroism amazed the world. These are the same people O.Biletsky emphasized, strong, brave, tireless in campaigns that do not need wealth, but a need for freedom, without which there is no life for them.

These people can take bare hands a hot cannonball, they despise physical pain ("like saying that it hurts when the living skin ripped off, and it seemed mosquitoes bite"). They rather die, than become slaves. In the poem humanist writer condemned serfdom as a great evil, and placed the lords and other people's offenders in hell.

"Aeneid" is a real encyclopedia of Ukrainian people life. "Almost every verse of the poem, for those who can read an encyclopedia, can be developed into a scientific exploration of a particular aspect of modern Kotlyarevskyi reality. The writer has always adhered to the truth of life, which is full-blooded flowing in each line of the poem. Understand an object, a phenomenon, a name of the event is only half the story. The second part, no less important is to find out in what context the work, and with it the reality, historical period there is anything that is the content of the poem. It is not that verse - a line, a single word is not taken just for communication between episodes. Everything works, everything has meaning, every word is in the place, where it should be. And there is in all an exceptional knowledge of the existence of the Ukrainian nation, its psychology, its nature "(O.Stavytskyy).

According to Valery Shevchuk, the entire fabric of the "Aeneid", is "like expensive rug woven with a pattern of baroque literature and Ukrainian folk art, songs, stories, heroic epic, all seasoned with traditional classicism. "Aeneid" Kotlyarevsky was destined to become a landmark work that contributed to the social and aesthetic traditions, with a little delay in our case - the assimilation of national language as the main literary, and all other non-essential lifted up: Polish in Western or Russian in Eastern Ukraine, also the Latin in Transcarpathia ... From this point of view "Aeneid" really is not a work of ancient but a modern literature, and exactly speaking, it has completed a literature old and born the new one, therefore, it was like kind of a phoenix in our literature during combustion and resurrection. What by the legend was in a nest at the same time. "

"Aeneid" had great influence in shaping the identity of the Ukrainian people for its growth. The book was distributed in handwritten copies, because the circulation of published "Aeneid" was quite small. But even before it appears in print, a work was read in manuscript form. It became popular. "Ukraine enthusiastically read a remarkable work of mighty pen - wrote biographer Kotlyarevsky S.P.Steblin-Kaminsky: ease of narration, true colors, subtle jokes, vivid sketches of manners and way of life were fully new, adorable ...

Describing his paintings from nature, the author never erred the truth: the nation is reflected in his poem, as in a mirror, there is also a strict morality, and simplicity, and high heartfelt feelings. "

Painting from nature, the author never erred the truth: the nation is reflected in his poem, as in a mirror, there is also a strict morality, and simplicity, and high heartfelt feelings. "

Ukraine today with great pleasure reads "Aeneid" Kotlyarevsky where our people is dignified - the main hero of the poem, especially the one, that is talent decorated by Anatoly Bazylevych, where each page (Commemorative Edition) is beautifully illustrated. And not only reads it with pleasure. Once I has heard a radio program, as during World War II one Byelorussian, who was in hospital seriously injured, with great pleasure read the "Aeneid" Kotlyarevskyi and laughed heartily, and the laughter caused by poem, helped him recover. It is said that laughter heals people. This is transferred to the satirical comic tones. As for the humor, which wrapped the whole poem, then, according to O.Stavytskoho, "this is the Encyclopedia laugh culture of the Ukrainian people." A O.Biletsky aptly wrote: "People power in the poem breaks free of deranged laughter that from gradually unconscious " animal" laughter become the laughter of criticizing mind", and then resort to analogies. "They say - he said, - Kotliarevsky was an amateur of artists Flemish School. But not with Rubens but with far later great Russian artist Repin, the creator of the picture "Reply of the Zaporozhian Cossacks," it should match the author's "Aeneid."Working on this picture, Repin wrote to V.Stasov about Ukrainians: "No one in the whole world felt so deeply freedom, equality and fraternity." This nation, which mentions Ilya Repin is direct relative "Trojans" Kotlyarevsky.

I.Kotlyarevsky was a great humanist and grieved for the fate of his hurt and humiliated people, stood on his defense. Therefore O.Biletsky wrote: "However, in the" Aeneid "Kotlyarevsky there is still something that could feel the readers of the poem. Behind the heroes it felt the presence of the author – a carrier of humane and progressive ideas, though he conceals his true colors by comic mask. He is far from any thoughts of revolution, but comparing the two truths:

Serf’s truth is prickly,
Landlord’s one is flexible in all directions,

He does not hesitate to take a side of the truth which does not bend. "

How true this idea sounds today, when we have people living under one truth, and those, that depend mostly the material and spiritual life, have their own truth. Although in words it seems that all of them live under one truth. Unfortunately, the words are apart from the actions. But this should not be. The real truth is only one.

"Aeneid" Kotlyarevskyi entered the golden fund of not only Ukrainian, but also the world culture. Beauty and strength it was given by charming music Mykola Lysenko, who created an opera based on this poem. It was also voiced by Lion Łopatyński. "Aeneid" is woven organically in the art of Ukrainian artists. It lives with her author, because the things that serve the people, could not die.