The history of one exhibit: three-line rifle 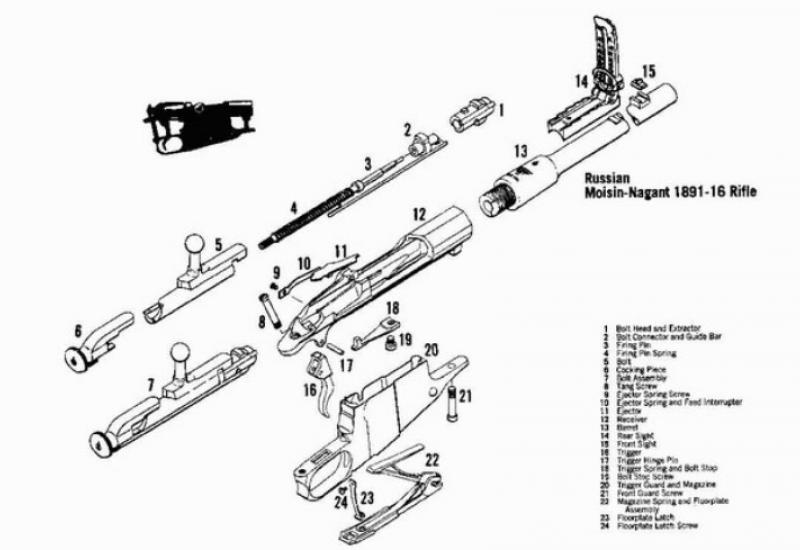 In December 2003 a unique collection of small arms was handed over from the military part of Shepetivka to the State Polytechnic Museum at NTUU "KPI". Among the various weapons, one rifle stood out with its size and execution.

In the recently opened exposition, the visitor will definitely pay attention to this exhibit, which is in the center of the rifle exposition. It calls "7.62-mm Mosin rifle sample 1891/1930", better known as "three-line rifle".

In the eighties of the XIX century. All over the world, work was underway to switch to multi-shot small arms and smokeless gunpowder. In Russia similar weapons are also being developed. The commission for armaments was created and examined them more than 150. Captain Sergei Ivanovich Mosin presented to the competition commission a rifle of his own design. But officials believed that foreigners would better develop such weapons. The main competitor of Mosin was the manufacturer Leon Nagan. After comprehensive tests for weapons, the "Three-Line Rifle of the 1891 Sample" developed by Mosin was adopted, however in bureaucratic red tape the name of the designer from the weapon's name was withdrawn. For participation in the contest, Nagan received a 200 thousand rubles bonus, Mosin for a rifle - 30 thousand rubles and the Order of St. Volodymyr. The rifle had excellent characteristics - a target range of 3200 steps, a store for 5 rounds and a weight of about 4 kg.

The design of the rifle was simple and reliable. The shutter consisted of only seven parts, striped down and installed without tools.

There is no fuse, locking the trigger by placing the trigger in a special position. Separating the shutter by pressing the hook. The magazine was easily filled with cartridges, the feed mechanism operated reliably. The Russian army has always paid much attention to bayonet combat, so the rifle had a removable tetrahedral needle bayonet and a straight neck of the butt. On the basis of an infantry rifle, a dragoon, Cossack rifle and carbine was developed, differed insignificantly in size and performance.

The design of the rifle was so successful that  more than half a century of history was improved. After switching to cartridges with a sharp bullet, a sectorial sight with marks not in steps, but in meters is installed. In the Soviet Union, a dragoon model, modernized in 1930, was adopted. Changed lodgment rings, simplified production technology. In 1931, on the basis of the infantry, a sniper rifle with an aiming range of 2000 m.

Three-line rifle for the first time combined such necessary characteristics of small arms as reliability, simplicity of design, power. It is these characteristics that are basic for small arms in our time. The rifle was officially used in the USSR in the transition to automatic weapons. However,  until the early 1960s it was used in military units, and today it is in arsenals. A cartridge designed for a rifle is also used in our time in machine guns and sniper weapons.