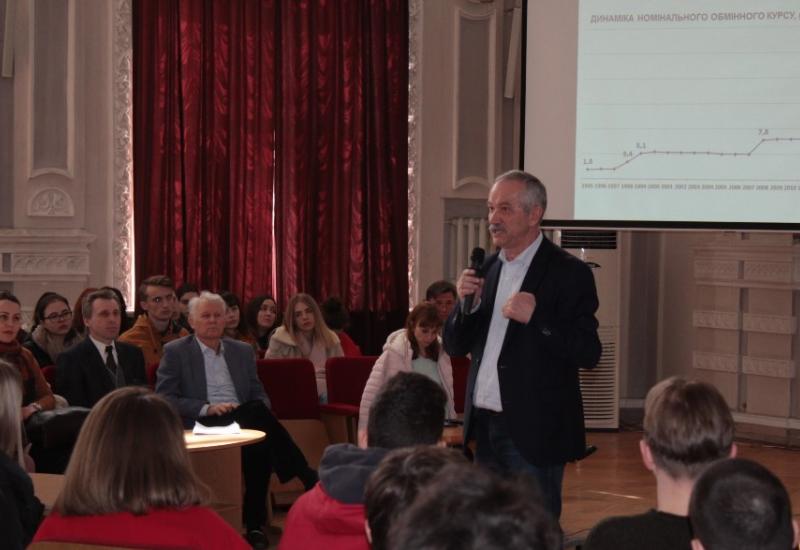 The lection ‘‘What stops economic growth in Ukraine’’ was led by famous economist, a People`s Deputy of Ukraine, former Minister of Finance and Vice Prime Minister of Ukraine – Viktor Pynzenyk for Igor Sikorsky Kyiv polytechnic Institute`s student and employees.

‘‘Today I am not like Minister or Deputy for you. Today I am in my ordinary role – a professional teacher, - that is how the lecture was started. – And I want to change a bit the topic of our discussion. I am not going to sing today, so I won`t talk about policy too. I want to talk with you about exchange rate.

So, Victor Pynzenyk told about hryvnia`s birth in 1996 and about its three devaluation in last two decades in Ukrainian history. Also he told about what exchange rate is and its similarity with the price of fat or other products. He noted, that exchange rate is a compromise between provider and consumer. If to talk about dollar-hryvnia, so for it exporters and importers find a compromise in the price of 27 hryvnias for a dollar. Viktor Pynzenyk also explained how the exchange rate is formed and what influences on it. His speech was full of dialogs that clearly illustrated the main theses.

Also, he explained the main reasons of the devaluation of national currency. One of them is the policy of fixed rate. And he noted that exchange rate is not only the reaction of country’s economy. ‘‘The rate made the same function as the temperature rise in a sick person’’, - he stressed. In this context he pay attention to the difference between the nominal and the real exchange rate. And also to analyze this or that process in economy you have to take into account both this indicators. According to him, after the last significant devaluation of the hryvnia the rise in prices for domestic goods lags significantly behind the increase in prices for imported goods, that is, the real exchange rate is much lower than the nominal one, as a result of which the national product forces out the imported product from the market. The exchange rate has its therapeutic effect in this way. “And if the exchange rate from the very beginning of the hryvnia existence was introduced as floating, we would never have had such a shock devaluation of the national currency and an ambiguous indicator of the exchange rate. Because, the rate would immediately correct the situation”, he said, and he drew the attention of the listeners that a professional decision was finally made on this, that is, there is no fixed exchange rate in Ukraine.

Victor Pynzenyk also spoke about the impact of export surplus on the exchange rate of the hryvnia, changes in foreign debt indicators, even foreign exchange earnings to Ukraine from its citizens working in other countries etc and also about the necessity for cooperation with the International Monetary Fund. By the way, he noted the external debt of Ukraine has recently decreased by $ 2,700,000,000, and this is a great merit of the workers ... “Now we have current outlays balanced. We have enough currency coming from current operations — as an export and income from guest workers. Moreover, the situation allows to increase even partially foreign exchange reserves and reduce debt. The only thing that it cannot be done in a very short period of time”, he stressed.

Another problem that poses risks for the exchange rate and which Victor Pynzenyk paid attention to is the problem of budget deficit. The question of balancing the budget is one of the key issues of the domestic economy. Among other problems that retard its growth is the problem of attracting investment. And potential investors are largely swelled by the unpredictability of the exchange rate in Ukraine, because their goal is not to “feed the Ukrainians”, but to make a profit from the funds invested in the Ukrainian economy. This, according to the lecturer, is a determining factor in the economic growth of Ukraine. “Ukraine can become a fertile ground for economic growth, but for this purpose it is necessary to take a number of professional decisions, without populist steps to the left or to the right”, he said, concluding the lecture.