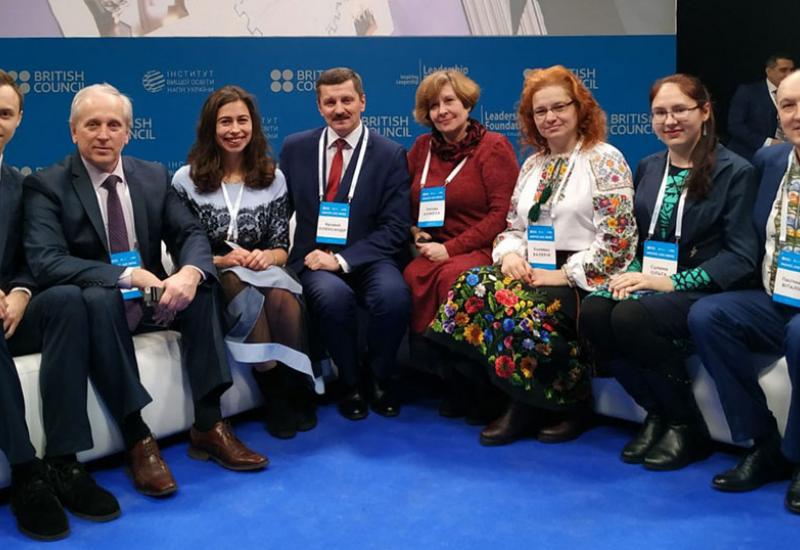 Its goal was to create a national network of “agents of change” ,specialists who are ready to introduce innovative changes in their institutions, as well as to introduce mechanisms for the dissemination, cooperation and exchange of effective practices in developing the leadership potential of Ukrainian universities  by 2019.

Igor Sikorsky Kyiv Polytechnic Institute team also participated in the final event, which took place on March, 5, 2019, and gathered more than 200 agents of change from 40 institutions of higher education of Ukraine.

Head of the British Council, Mr. Simon Williams, addressed the participants in a welcoming speech, noting that the most important achievement of these three years of cooperation between Ukraine and Great Britain is the creation of a network of new leaders in the field of education, which has become a significant impetus for the introduction of innovative changes not only in the universities themselves but also in the system of higher education in general.

The meeting was also congratulated by the Minister of Education and Science of Ukraine Lilia Grynevych, the President of the National Academy of Pedagogical Sciences of Ukraine Vasyl Kremen and the Director General of the UK National Educational Agency Advance Alison Jones. Lilia Grynevych emphasized that the British Council has always been a reliable partner of Ukraine in the field of transformation in higher education because it is very important that Ukrainian universities become those institutions that are centers of social change in their regions.

A member of Igor Sikorsky Kyiv Polytechnic Institute team, a student Rostyslav Pashkov, as one of the successful graduates of the Leadership Development Program at the universities of Ukraine, became the face of the final meeting – his very photo was posted on the post. The realization of the results of the Igor Sikorsky Kyiv Polytechnic Institute   project in the form of a questionnaire became a visible implementation of the slogan of the event: “To create innovations, to be a leader, to inspire transformation’.

Participants of the event also had the opportunity to listen to international experts and to take part in interesting discussions, during which the exchange of experience and best practices between Ukraine and Great Britain took place.

Extremely interesting was the statement by Ms. Pat Kie Lingley, an external consultant in the field of higher education, who presented the Program from the point of view of an expert involved at the stage of its planning. She noted that the work performed during these three years can be characterized by three words: inspiration, growth and creativity and this gives a much more vivid assessment of the results of the Program than any of its statistics.

In the first session “Leadership in the Context of Higher Education: A Personal Leader Way” a panel discussion took place, in which Lilia Grynevych and Alison Jones took part. The main question for discussion was how changes in higher education would help Ukraine to become a leading country and what challenges are there in higher education of Ukraine and in the world. During the discussion, Lilia Grynevych said that modern Ukraine could offer world-wide innovative approaches and solutions to various humanitarian problems that are on the agenda today. The main source of these innovative ideas should be universities that train the leaders of innovators.

In turn, Alison Jones expressed the opinion that Ukrainian universities should focus on what each of them is unique and has competitive advantages over other universities.

During the second session “Young Leaders” and the third session “Leadership in the University Community”, a discussion with participants of the Program of different years took place. Representatives of the university administration, vice-rector and pro-rector  as well as students – perhaps the most active members of the university community, shared their own impressions. This proved that one of its important results was the establishment within the framework of the paradigm of student-centered training of vertical communications between all its members – from student to vice-rector . This approach has been successfully implemented in the work of the Igor Sikorsky Kyiv Polytechnic Institute project team.

During the meeting, the organizers conducted an interactive online survey on “Who should be the main driver of qualitative changes in higher education in Ukraine?” twice. The results of the survey showed that most of the participants of the Program believe that the teachers and university scientists are the leaders. Lilia Grynevych noted that she is very happy with the readiness of universities to take responsibility and their ability to carry out this responsibility.