Formula the Student of the Igor Sikorsky Kyiv Polytechnic Institute – 2018 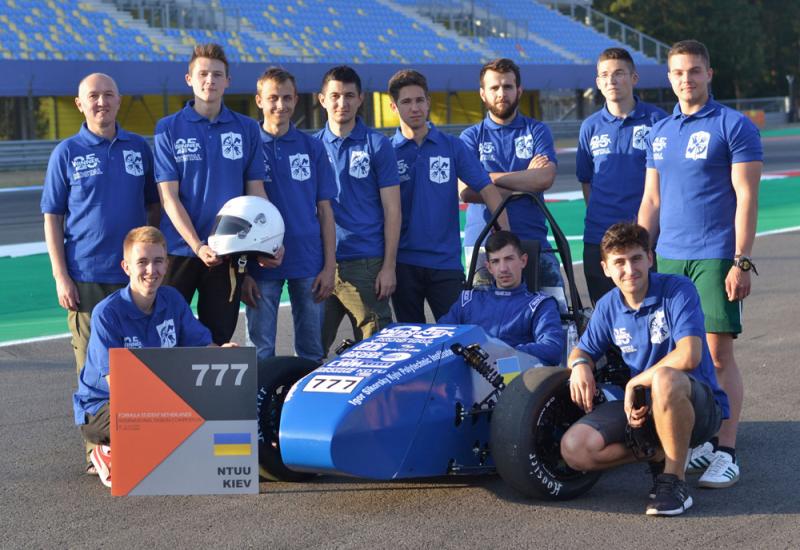 Four years ago, a group of initiative students of our university under the direction of the head of the Department of Integrated Mechanical Engineering Technologies of the Mechanical Engineering Institute, Professor Vitaliy Pasichnyk joined the international Formula Student project. This year, the team «Formula the Student of the Igor Sikorsky Kyiv Polytechnic Institute» built a fourth car and went with it at competitions in the Netherlands city of Assen. Our correspondent speaks with professor V. Pasichnyk.

- Tell us briefly what is Formula the Student of the Igor Sikorsky Kyiv Polytechnic Institute?

- Teams participating in this project must design and manufacture a real race car, present it to the jury and take part in it in motor racing. The project is not so much sporting as engineering.Its goal is to educate real engineers who can not only design a car, its parts and details, but also find the means to implement the project, organize the manufacture and testing of the car, as well as develop a business plan to create a production for the production of a small series of cars.

According to the rules of the competition you cannot make one car and gradually improve it. Each year the team has to design, manufacture and represent a new car.

- What is interesting this year's car?

The structure of the frame is improved - its shape and structure. Thanks to the use of modern design technologies and the precision of manufacturing of parts, the frame became lighter, but did not lose strength.

The vast majority of knots and car parts are original. They are designed and manufactured specifically for this car. Of course, standard components-engine, accumulators, wheels, bolts, nuts, hoses are used. A frame, suspension, transmission, steering and braking system - the original development of students. It is very important. It's purely engineering.

I want to emphasize that the students did their own development. No teacher participated in the design. Teachers only provided advice. In addition, when developing a car project, many specific problems in the automotive industry need to be addressed, and there are no specialists in this industry in our university.

Students set up an electronic engine control unit on their own. This is not easy, because, according to the competition rules, in order to reduce the engine power, the diameter of the inlet for air should be 20 mm. In the original engine it is 40 mm. If the control unit is not reworked, the engine will not work. Moreover, with its modernization should take into account the need for engine operation in different modes.

- And how is the strength of the structure controlled?

- The regulations have certain requirements for the diameter and thickness of the walls of steel pipes, from which the main arc and safety arc are made. The frame should have a triangular structure. In order to reduce the mass, aluminum pipes may be used. But according to the rules of such a frame should be tested for ultimate strength, that is to destroy. We can not afford because of the absence of funds. It is allowed to use carbon monocoque. Then the car will not have a frame and will be much easier. But it is very expensive. One monocoque will cost more than 30 thousand euros.

- Who is in the team "Formula Student KPI"?

- The team consists of several departments with certain functions. Captain of the team - Vasyl Kutuz (MMI). Artem Yuschuk, Stanislav Petin and Dmytro Nagorny (MMI) were involved in the design and manufacture of the frame. The pendant was designed by Andriy Zinchuk, Ruslan Shcherbatyuk and Vasyl Zvarych (MMI). Work related to the engine was performed by Vyacheslav Rybka (FEL) and Mikhaylo Kovalyov (MMI). Transmission was designed by Svyatoslav Petrovec (MMI). Kateryna Avramenko (FIOT) and Rina Oreper (FPP) have prepared a business presentation, and Julia Kubashevska(PL) and Timur Bakhtovarshoyev (MMI) have a report on the cost of the car. Oleksandra Kibko (PHOTO) was the administrator of the project site.

Students of all faculties of our university can take part in the project. We need not only engineers (mechanics, welders, electronics), but also managers who need to manage the project, economists who have to calculate the cost of manufacturing a car (these calculations are also judged by the jury). Requires priests - to provide information support to the project and the interest of sponsors, operators for photo and video. In general, the team participating in Formula Student should be able to not only design and manufacture a car, but also organize its production.

The jury, which includes professional automotive engineers, considers projects from the point of view of investors who want to invest in the creation of production of latter-day cars that are intended for trips on special autodromes. That is, first of all, there should be a car that has good technical characteristics and looks good. Secondly, the team must know how to organize a profitable business for the production of such cars and can hold a presentation that will interest investors.

- How has the team been changing for 4 years?

- Every year the team is updated at least half. This project - a kind of conveyor, which provides training and engineers, and economists, and PR. Those who graduate from the university have no right to participate in the project. Someone lefts team because of being tired. After all, taking part in the project takes a lot of time and effort. For example, the captain of the current team, Vasyl Kutuz, estimated that he spent a thousand hours on work in the project.

- How did the competition take place?

- At this year's competition in the Netherlands there was an extremely rigid technical inspection. Twenty-two of the forty participating teams did not pass it(the last year - four). We also did not pass. Of the thirteen teams that brought electric vehicles, the technical inspection was only four. We looked at the competition, talked with competitors from other countries. Much learned. This experience will be taken into account.

- What were the mistakes? What was wrong?

Somewhere a little bit did not pass the templates, which check the design of the car for compliance with the regulations. When the frame was designed, we counted on the existing engine and everything was good, but when we made, bought and installed a new engine, there were elements that interfere. This resulted in a number of design changes that were not enough. A pedal knot was installed a little closer than allowed. There was something that I consider clinging, that is, such claims that went beyond the requirements of the regulations. But 80% of the comments were absolutely fair.

We will take into account all the comments in the future, and next year we will make even better car.

- So, this year you did not take part in the race. And the last?

- Last year our car was racing, but did not reach the finish. The suspension bracket has been broken. The right rear wheel lost its longitudinal stability, began to fluctuate, the pilot slowed down and drove away from the distance. I note that only six of the 36 cars reached the finish line.

The competition was held at the TT Circuit Assen Motorcycle (Assen, Netherlands), where stages of the world championship on motorcycle racing are being conducted and cars of Formula 1 are tested. Distance - 22.5 km. The route is very complicated, it has many turns. The pilot should often speed up and brake at turns. During the movement there are large lateral loads on the car and the elements of the suspension, which became the cause of breakage. If our car riding at a speed of 20 km / h, then we would go to the finish line and take 7th place. But when the car accelerates in four seconds to a speed of 100 km / h, no one will drive at a speed of 20 km / h. In addition, everyone wants to come to the finish first.

- Where do you take the money to make a car?

- Students themselves have to look for funding for the project. The last car was created at the expense of sponsors who either gave money or provided services for its manufacture. This year, the total amount of support from sponsors was 10 thousand dollars. This is one of the most successful years. We bought a new engine, new shock absorbers, wheels and a set of racing tires. I note that the budget of European teams is not less than 150 thousand euros.

Every year we have a financial problem: we start a campaign to raise money in the fall, and they appear somewhere in the spring. We begin to manufacture the car in May. And there May holidays and session ... Therefore, the main work on the manufacture of cars is carried out in the summer. The European teams that do not have money problems start manufacturing cars in January and have more opportunities to test and test them.

However, despite all the difficulties, each year we build a new car, which is better and better. The support team of sponsors is also growing year after year. For the second year, we have the title sponsor - Winner Imports. Another major sponsor is KOSTAL. Other companies that provide finance or services also helped us. Henkel has provided its high-quality products and lectured on its use. We are very grateful to CWM Lazer Technology, which has provided laser cutting of metal. This made it possible to very accurately make the details of the car frame and equipment for its welding. ABICOR BINZEL provided us with free welding equipment. I note that there were no comments on the quality of welding in the inspection. Financial assistance was also provided by ZF Ukraine, Tikon, and Zolota Nyva. Also, the company, our partner since the first year of the KDTU team, and the company founded by the former members of the PeLe engineering team, provided assistance.

- How do you rate the prospects of the Formula Student KPI project?

- For four years the project "Formula Student" in the Igor Sikorsky Kyiv Polytechnic Institute proved his stability, and I think that in the future we will see every year a new, more technically perfect car. It will have aerodynamic elements (wings) that will improve its dynamic characteristics. We will improve the engine management system, including automation of gear shift, more widely use modern constructional materials, including composites. We will increasingly apply state-of-the-art technologies, including physical and technological processes and additive technologies. Absolutely sure that over time our students will make a car with an electric motor, and then a unmanned race car.

I will add that today on the basis of the achievements of the Formula Student project, other projects that were and will be presented at start-up competitions, in particular at the Sikorsky Challenge Startup Festival, are emerging and implemented.