Presentation of the book "In Search of Truth: They Were Ahead of Time" 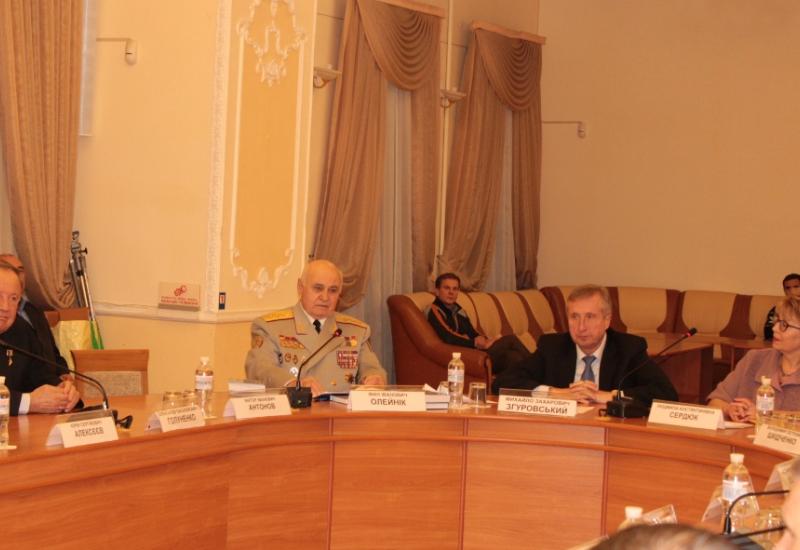 On November 22 a presentation of the book "In Search of Truth: They Were Ahead of Time" and a meeting with its author Ivan Oliynyk was held at Igor Sikorsky KPI.

The author of the book - Colonel-General Ivan Ivanovych Oliynyk dedicated his life to the service in the Strategic Missile Forces. For many years he held command posts: commanding a missile regiment, a division, headed the Perm Higher Military Command-Engineering School of the RVSN named after Marshal of the Soviet Union V. I. Chuykov, for six years he was the head of the "Plesetsk" cosmodrome. He finished his service on the post of Deputy Defense Minister of Ukraine on Arms - the Chief of the Armed Forces of the Armed Forces of Ukraine. He is the author of three scientific and technical monographs, books on the history of rocketry and rocket troops and numerous articles.

Representatives of the space industry of Ukraine, veterans of the Strategic Missile Forces and cosmodremes Plesetsk, Baikonur and Kapustin Yar, members of Ivan Oliynyk family, as well as teachers and students of Igor Sikorsky KPI took part in the presentation.

"We are honored to greet the true constellation of outstanding people that we see in the hall. Today's event is very important for Kyiv Polytechnic - the presentation of the book of the legendary, without exaggeration, man - the candidate of military sciences, doctor of technical sciences, colonel-general Ivan Ivanovych Oliynyk ", - said the rector of Igor Sikorsky KPI Academician of the National Academy of Sciences of Ukraine Mykhailo Zgurovsky at opening ceremony.

Finally, Colonel-General Ivan Oliynyk handed over his books to the State Polytechnic Museum and the Scientific and Technical Library.

In the photo: Colonel General Ivan Oliynyk talks about the heroes of his books.