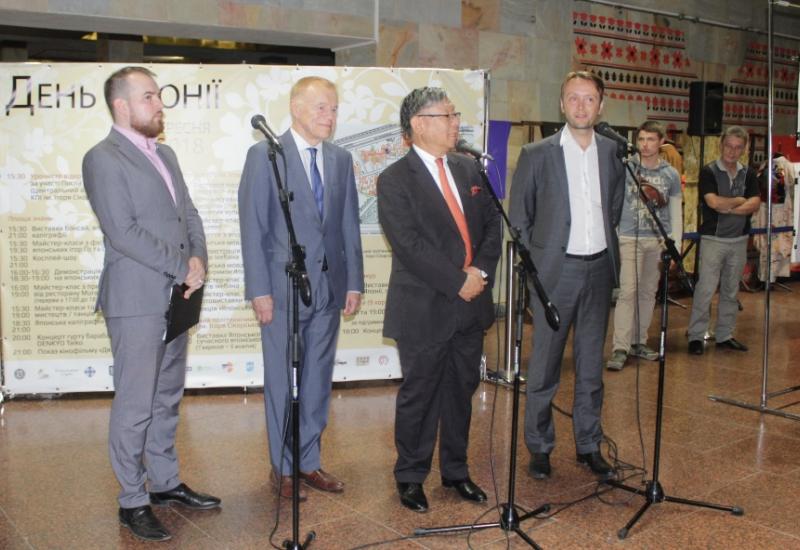 On September 7, Igor Sikorsky Kyiv Polytechnic Institute was painted in the national colors of Japan. There is the spirit of the Country of the Rising Sun on the campus. In the Scientific and Technical Library, the State Polytechnic Museum and the University's Knowledge Square, from morning until evening, events were held devoted to the most varied phenomena of traditional and modern Japanese culture.

Igor Sikorsky Kyiv Polytechnic Institute held Day of Japan. The university was waiting for it for five years. For the first time such a day was organized in 2014 in Lviv, then it was held in Odessa, and then in Dnipro and Vinnytsia. And finally, the turn came to Kyiv. True, it can not be argued that for all these five years, Kyiv Polytechnics was generally deprived of the opportunity to get acquainted, to study and to join the scientific, intellectual and artistic achievements of the Far Eastern country. Indeed, it is here that there is probably the main center of development of cultural cooperation and understanding between the peoples of Ukraine and Japan. It is also called the Ukrainian-Japanese Center of Igor Sikorsky Kyiv Polytechnic Institute and throughout its years of existence it is doing a lot of work, and also in close cooperation with the Embassy of Japan in Ukraine, organizes a multitude of activities aimed at deepening relations between our countries.

Ukrainian-Japanese Center of Igor Sikorsky Kyiv Polytechnic Institute is the main organizer of the Days of Japan.

“Relations between Japan and Ukraine are very good, there is a close relationship between our countries. I think that ties in the political, military and other spheres will continue to develop. Communications at the citizens' level are also very important,” said Sigaki Sumy, Ambassador Extraordinary and Plenipotentiary of Japan to Ukraine in Igor Sikorsky at Kyiv Polytechnic Institute. “It is therefore very important to take such measures. Last year was the Year of Japan in Ukraine, and it gave a very powerful start to the further development of our relations, the development of which is the current Day of Japan. I think that it is also very important for strengthening our relations and communication between our countries”.

This year's program of the Day of Japan includes an exhibition of media art of a young but already well-known artist and photographer Kanakava Mayuko (by the way, the second time this year – the first time Kyiv's polytechnics got acquainted with his work in February this year, and judging by the reviews, were delighted ); photo exhibition of Japanese and Ukrainian photo artists Hiroshi Tanaka and Olga Khomenko “Ukraine and Japan: Meetings”; kimono exhibition; master class from oshibana (creation of paintings from natural materials – leaves, flowers, scales, etc.); classes in Japanese calligraphy; Master classes in the art of arranging the flowers of Ikebana and playing go and much more. And these are just those events that take place or will be held in the Scientific and Technical Library in the nearest future.

Meanwhile, the State Polytechnic Museum at the Igor Sikorsky Kyiv Polytechnic Institute opened an exhibition of the Japanese Foundation for “100 Modern Japanese Designs”, which will last until October, 5. The university's own art space, the Colosseum, hosts a demonstration of the Japanese tea ceremony with the support of the Urazenka Tea School. Oriental music lovers will also be able to listen to the unique singing of the Japanese bamboo flute shyukhachi: they will be played by renowned master An Rei.

One more place where visitors can satisfy their curiosity of Japan is the university alley of Sakura. There you can see exhibits of the exhibition of models of famous structures of Japan and sculptures by Stas Kadochnikov. It is worth recalling that Sakura Alley itself is to some extent an art-object, which charm can be fully appreciated in the spring. Its tree is a gift from the Japanese Embassy to the University of Japan in the Year of Japan.

Well, the main place of this peculiar festival of Japanese culture is, of course, the Square of ​​Knowledge. Despite the little rain that did not spoil the beginning of the holiday, here, willing to join the Japanese traditions, were able to inspect the exhibition of bonsai, miniature trees in pots that can grow for several decades, and see Japanese armor; see cosplay shows, dance bon and show performances by masters of Japanese martial arts – wrestling sumo, kendjutsu, aikido, kendo and even traditional kyudo shooting, learn to prepare roles in the master class from the Murakami restaurant, etc.

The concert of the DENKYO Taiko drummers and the demonstration of the film “Thank you”, a documentary film about Ukraine in the eyes of the Japanese also took place.

Nevertheless, the opportunity to plunge into the cultural atmosphere of the country of the rising sun will be also possible the next day; visiting the exhibitions of photographs and media, the master class from Ikebana, the lecture by Elena Kapranova “The Magic of the Japanese Autumn” (her listeners will virtually visit the best gardens and parks of Japan, take part in the Matsuri (traditional holidays) and dance in the onsenenas, which have magnificent mountain views) and taking part in the conversation “Japanese Impressionism”, which will be held by art critic and popular writer Anna Wladymyrska.

In the photo: Participants of the Day of Japan at Igor Sikorsky Kyiv Polytechnic Institute are congratulated by the Ambassador Extraordinary and Plenipotentiary of Japan to Ukraine Sigaki Sumi